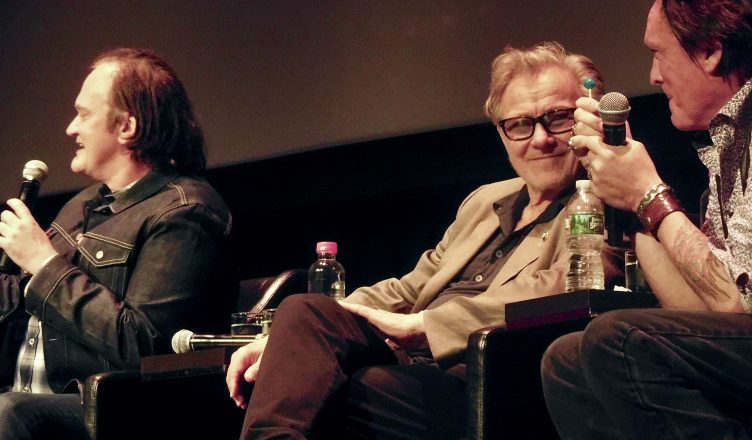 Quentin Tarantino provided his own 35 mm print for the 25th anniversary screening of “Reservoir Dogs” at The Tribeca Film Festival Friday evening at the Beacon Theater. The print is sensational and the bloody scenes are even more vividly red. Following the screening, Tarantino, Michael Madsen, Harvey Kettle, Steve Buscemi and Tim Roth reunited for a panel that was as funny as it was epic. Moderated by entertainment writer Lynn Hirschberg, the event was a chance for the actors to reminisce and tell terrific stories about the shooting of the iconic film.

Tarantino told the crowd as he took the stage, “Except for all your cell phones, you guys were a great audience.” Reservoir Dogs is about a jewelry heist gone wrong. The crime is committed by a bunch of bunglers, strangers who know each other only by their invented names, which are colors.

Once Harvey Kettle came onboard to play Mr. White and later also became a producer, the movie got rolling said the director.

“A lot of wild people came in to read for the part of Mr. Blonde, including Tom Waits,” said Tarantino. Waits even commented that Tarantino’s script was “poetic.” Tarantino mimed Waits’ raspy voice. But the part was Madsen’s, who initially wanted the part of Mr. Pink. “I told him you’re either Mr. Blonde or you’re not in the movie,” Tarantino told him.

They then decided they needed a New York actor to round out the cast. “One weekend we fly to New York,” said Tarantino. “Harvey was in first class. We were in coach. Harvey goes, “‘Yeah, you know, I guess in a perfect world there’d be no such thing as first class. Since then, I’m going to fly first class.’”

“We met with a bunch of New York actors and that’s where we got Steve, our Mr. Pink,” Tarantino said.

“I’m always reminding Steve Buscemi that he owes me his career,” Keitel cracked.

They sent Tim Roth the script. “You were like this budding art film superstar,” Tarantino said of Roth, adding, “I didn’t want ‘Reservoir Dogs’ to be a straight to video genre movie. I wanted it to play at all the art houses. I wanted it to be a genre-based art movie like ‘Blood Simple.’”

“But that’s an unusual aim, an unusual want,” said Roth. “What happened to me with this film in particular, and that’s why it’s quite enjoyable or nerve-wracking tonight, because it was actually a complete shift in my life.” Roth said the five-week shoot and the two-week rehearsal period was a big commitment. “Then you step back and then you pray that it’s going to be as good as this is… And then it just turned my life on its head completely.I wasn’t expecting it. Didn’t know it. Loved the dialogue. Thought it was fucking great. Met this guy (pointed to Quentin)I and we dug right into it, strangely.Also met my missus shooting it.”
The movie debuted at Sundance. “It was a disaster,” said Tarantino about the first screening.

“They didn’t have the right lens and the movie looked like caca all the way through.” He added,“That would be bad enough, but then it gets to the final climax when everyone’s yelling at each other, everyone’s got their guns pointed on everybody else, then all of sudden – almost as if on purpose – right at the height of that scene there’s a power outrage,” he said. “I was like, so this is what it’s like to watch your movie in public!”

The second week it was shown at a big industry screening and big names showed up, including Faye Dunaway and Sean Penn. “That screening went fantastic!” said Tarantino, with Dunaway even asking a question about composition.

The infamous torture scene got everyone talking. Some people started to leave the theater when it came on.

Tarantino said the first year the film was on the festival circuit he started counting the walkouts.

He said 33 was the largest number of people he counted exiting the theater at a screening during that scene.

At one festival they were showing one of Peter Jackson’s earliest films, “Dead Alive,” said Tarantino. “People were drowning in zombie blood and guts. I thought, okay, I’ve got an audience that won’t walk out… five people walked, including Wes Craven. The guy who did ‘A Nightmare on Elm Street’ and ‘The Last House on the Left,’ my movie is too tough for him!”
In the torture scene — as everyone knows — Madsen turns on the radio and starts dancing and singing to “Stuck in the Middle With You.” He’s got a straight razor in his hand and after a harrowing moment slices off the ear of a young cop tied to a chair.

Madsen had a problem with the scene but not because of the violence. The cop pleads for his life, saying he has a kid.

“That fucked him up,” said Tarantino. Madsen had just had a son.
“I didn’t want to fucking do it. He’s got a kid,” whined Madsen.

“When he was just killing that was fun and the audience can appreciate it, but now that you learn he’s got a son it’s not so much fun,” said Tarantino.

They rehearsed for two weeks before shooting the film. “That’s unheard of in Hollywood,” said Keitel. “During rehearsal one day, let me get up,” he said, walking to the front of the stage to tell his story. He recounted that during rehearsals Madsen told him, “‘Sometimes I want to hug you and sometimes I just want to punch you in the face.’ And I looked at him and said,’I feel the same way about you.’ That’s how rehearsals proceeded.” Keitel laughed.

During rehearsals Madsen never did the dance scene said Tarantino.
“ That’s true, you never made me do it in rehearsal because I was so intimated by it. I didn’t know what to do,” said Madsen. “I didn’t know if I wanted to do it or not. In the script it said, ‘Mr. Blonde maniacally dances around (the cop).’ I remember specifically that’s what it said. And I kept thinking what the fuck does that mean?… What am I going do? So he never made me do it during rehearsal. He trusted me that on the day I would come up with something.”
Turns out Madsen never practiced the scene at home either. On the day of the shoot,  Madsen said, “I didn’t know what the hell to do. I heard that music and I thought, ‘Oh fuck I better do something.’… I remembered some weird little film that Jimmy Cagney did, I don’t remember the name of it, but he did this crazy little dance thing. It just popped into my head at the last second. That’s where it came from.”

They shot the scene three times, and the first time is the one immortalized on screen.

A few years ago Madsen said, he went to Michigan to open up a theater. “They were going to name it the Michael Madsen Theater,” he said. “I thought it was great, and the theater was as big as that closet over there, but it was a great honor and I was happy to show up. And then they sent me a memo of what I was supposed to do and it said, ‘Well first we’ll announce the naming of the theater and then Michael Madsen will come out doing the Mr. Blonde dance,” said Madsen, adding, “There’s no way I’m going to do that! I started to imagine myself 80 years old, someone asking me to do the Mr. Blonde dance. It’s been following me around forever.”

After the panel the actors went next door to the Beacon Hotel. I was sitting at the bar and Tim Roth, who is very charming, apologized to me for he and his friends crowding me at the bar. Then all of them, including Tarantino and Madsen, moved to a table where security guards kept watch. They were still there when I left at 1 a.m. while an bunch of diehard fans waited outside.