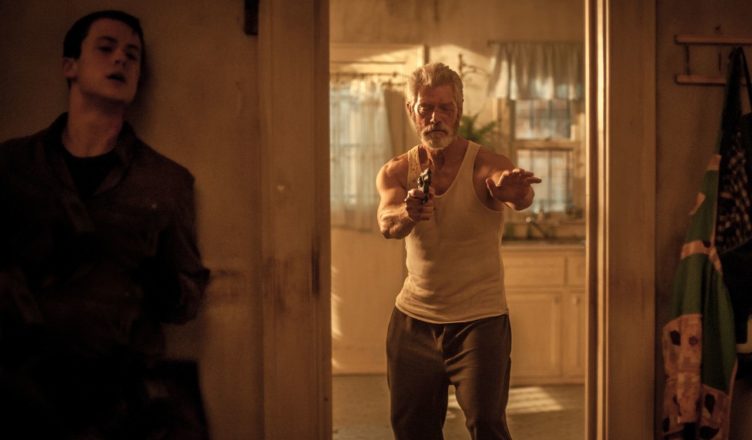 Synopsis:  Burglars invade the home of a blind man have the tables turned on them when they realize he isn’t what they expect him to be.

Director Fede Alvarez rose from the obscurity of making shorts to landing the “Evil Dead” remake. Now he follows that up with an even better film in ”Don’t Breathe”. A psychological horror thriller that keeps you guessing till the very end. The film follows three teenage burglars looking for a big score. They find it when they attempt to rob a blind man, only to find out that they are in more trouble than he is.

One of my favorite thrillers of the year was Cloverfield Lane, and this movie nails the tone and setting of Cloverfield Lane. It’s a really good thing. The first half of ”Don’t Breathe” is this intense and suspenseful thriller that had me on the edge with anticipation. Alvarez does a tremendous job building suspense and intrigue just by his direction of the camera. Watching the robbers navigate the old blind man’s house felt as if I was navigating through a haunted house. There is this feeling of the unknown. Each step they make could bring out anything. The actors move in such a precise and calculated way that it’s only natural to follow them along with your eyes.

Even though the majority of the film is shot in the house, the way the house is lit and set up makes the setting feel so much more dynamic than it should be. The night vision where the characters are getting around a pitch black basement feels as close to being in pitch black as possible. The actors eyes are turn into these giant black circles, which is natural occurrence had you been in any pitch black area. There is a turkey baster scene later in the movie, which is one of the most memorable and gross scenes you will ever see. There are just so many neat visual quirks that are a credit to the precision and details Alvarez works with.

I enjoyed the casting of the actors. Stephen Lang was such a great fit to play the ex-military blind man. He looks imposing and dangerous, even though he’s blind. After seeing his diligent performance, not only does he look the part to play Cable in a Deadpool/X-Men movie, but he has the acting chops and believability to play an imposing ass kicker. Jane Levy is one of the main antagonists/heroes of the film. She’s solid in the role. Reminds me a lot of Amy Smart. Acting and look wise. She also was in the Evil Dead remake with Alvarez, so a familiar casting choice for him. Dylan Minnette is a rising young actor who already had roles in movies like Prisoners and Goosebumps. He looks a LOT like Nick Jonas!

The film should be commended on not playing it safe and instead showcasing a lot of layers. You have a mysterious thriller feel, then it turns to a gory horror film, all while maintaining the intensity, intrigue and chills. It’s a well done film that doesn’t have to be categorized into just being a horror or a thriller. The scares are also pretty real. There are a couple of twists that came as a genuine shock. I really liked how the tables keep turning and the lines were blurred between the good and bad. The villains become the heroes and vice versa throughout the movie.

The buildup and climax were tremendous, but the payoff was only decent. The film started dragging a bit towards the end, became a bit unrealistic, went agains the tone it established early on. The ending was a bit disappointing, didn’t justify all that was set-up. The message was a bit lost in translation. Some minor questions were left unanswered, can’t say those as they pertain to the central twist.

“Don’t Breathe” is a top three horror movie (if you wanna characterize it) of the year (Conjuring 2 and Lights Out being the other). It has all the necessary intrigue and intensity you’d want in a movie like that. The visuals are very clever and the presentation is executed with detail and smarts. It’s a surprise and entertaining movie. One of those indie gems that looks really polished and high grade. ”Don’t Breathe” will hold you breathless with anticipation, so don’t forget to catch some breaths in-between.