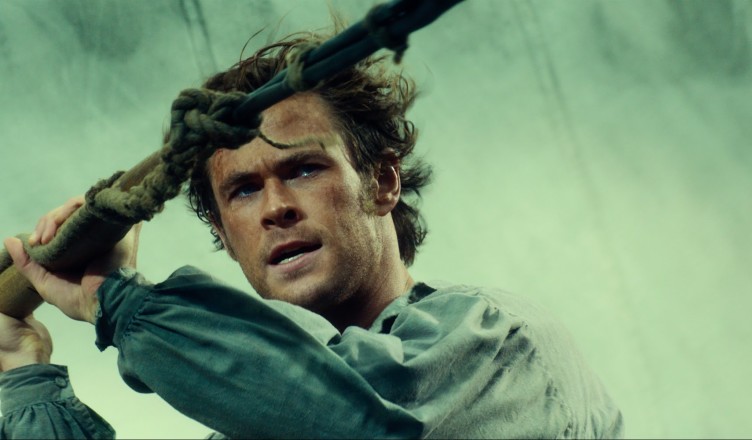 Synopsis: A recounting of a whaling ship’s sinking by a giant whale in 1820 that would inspire the great novel, Moby Dick. (Imdb)

The team of Ron Howard and Chris Hemsworth are back together and this time Hemsworth is chasing whales in the 1800’s instead of racing in the Grand Prix. “In the Heart of the Sea” is the story that inspired the Moby Dick novel. Howard crafts a fun and adventurous tale out of a classic novel that’s mainly known for being classroom literature. The story is based in the 1820’s where the Essex New England whaling ship gets destroyed by a rare monstrous whale. Hemsworth stars as Owen Chase, an experienced whale killer and ship captain in the making. Chase is shortchanged and is relegated to being an assistant to an inexperienced Captain George Pollard (Benjamin Walker). This is a story within a story, the film is being recollected and told by an elder Tom Nickerson (Brendan Gleeson) who is the lone remaining survivor, and who was just a young kid on the Essex.

The film has a grand scale appeal to it. The vast miles of sea combined with an isolated ship and a giant whale has an epic look and feel to it. Just the mere sounds of the whale cruising past the ship makes it sound like an earthquake just passed by. The destruction and damage the whale causes is of something you’d imagine “Jurassic World” playing out on water. The ship is isolated on the water and that’s what increases the magnitude of what happens on-screen. It’s a destruction action adventure as much as it is a period movie. The CGI isn’t over-the-top and looks fairly authentic and believable.

Hemsworth is owning his look and persona. There is just no denying that this guy has a physical appearance like an Adonis out of a Greek myth; he’s Thor after all. He’s a man’s man with pretty boy looks, and he’s suited well to play a tough leader of the seas. Hemsworth doesn’t get enough credit for his acting chops. He’s got the movie star appeal, even thought he hasn’t done supremely as a leading man at the box office. Howard still believes in him as he brought him back after their last movie “Rush”. Newly appointed Spider-Man Tom Holland does nice work as the young Nickerson. He’s the try-hard young kid that’s attempting to impress Chase whenever he can. Cillian Murphy and Brendan Gleeson add their proven talent to the movie with their supporting roles.

This is the kind of movie that 3D actually enhances. The underwater shots with fish, dolphins, all sorts of mammals that live in the seas showcase another world that’s occurring beneath the boat. The images of the crisp clear water and the sea animals looking transparent through it is very appealing to look at, kinda like big screen trip to the aquarium. It’s a well shot film with really nice cinematography work from Oscar winner Anthony Dod Mantle.

I found myself struggling and feeling uneasy with the depiction of the whale killings. We live in a society where animal cruelty is rightfully brought to the forefront. It’s tough to root for these sea hunters when you see an innocent animal being killed on-screen. In turn the monstrous whale becomes the hero who fights to protect his fellow sea species from the human cruelty. How can anyone blame the whale for the destruction it causes to the humans? Hard to root against it.

Overall, Howard does nice work with this movie. Anyone that can make destruction look so pretty is doing something right. “In the Heart of the Sea” has a nice contrast of movies like “Cast Away” and insert (Jurassic World) any creature destruction movie. Released during the same weekend as “Macbeth,” another period literature inspired movie, “In the Heart of the Sea” is fun and visually appealing without having to deal with the dread of reading Moby Dick.