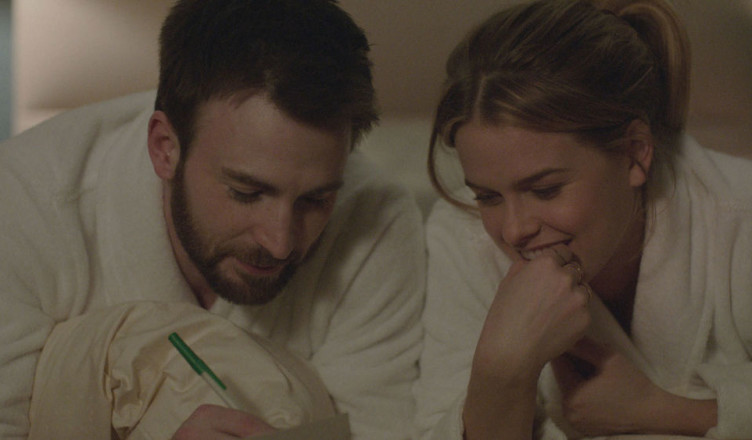 Synopsis: Two strangers stuck in Manhattan for the night grow into each other’s most trusted confidants when an evening of unexpected adventure forces them to confront their fears and take control of their lives. (Imdb)

Chris Evans feature film directorial debut is a romance that might have passed you by, but it shouldn’t. “Before We Go” (available on Blu-ray & DVD) has the similar formula of “Before Sunrise,” but it’s manages to stand on its own. The story is of two down on their luck strangers that meet at a chance encounter in NYC’s Grand Central Station. Nick Vaughan (Chris Evans) is a trumpet player who drowns his nights away performing to incoming and outgoing passengers. Brooke Dalton (Alice Eve) is blazing though the station in order to catch a train that she can’t afford to miss. These two strangers from opposite world’s are drawn together by a series of Brooke’s misfortunes. She needs to get to Boston by the morning, and Nick takes it upon himself to make sure that she gets home. Their journey throughout the night takes them across NYC where they discover and reveal each other’s inner struggles.

At the forefront this is a character based film on two individuals dealing with issues centered around love. The fine line between love and friendship is tested between the characters through every encounter that they have and experience together. The movie is presented as if someone was following Nick and Brooke and filming their interactions. It’s an organic reveal of the characters purpose and desires. The honesty of the characters and the film itself is very transparent.

The performances by Chris Evans and Alice Eve are tremendous and as natural and effortless as they can be on-screen. They play real people with real conversations and reactions. The word chemistry gets tossed around a lot, not always justified, but in this movie the subtle looks, smiles, laughs carry across the thoughts of the characters before the dialogue happens. Evans does some fine work in the film. His charm, sincerity, sensitivity, along with his dorky appeal makes Nick the kinda guy a stranger can trust (which is what happens). To think Evans is Captain America seems odd after watching him in this film, and that’s credit to the subtle and naturalistic work he does. Eve is a perfect complement to him in the film. For someone that has so much sex appeal and easily can be typecast into playing the blonde bombshell, she manages to let the acting cover up her beauty. Eve manages to bring forth a sense of a professional woman that’s approachable and goofy, while maintaining the aura of sexiness and being unattainable.

As far as directing goes, Evans makes it easy to follow the story by removing any sort of visual distractions and maintaining the focus solely on these two people.  The shots of the NYC skyline are magnificent. The story takes place entirely at night, and there is something peaceful and mysterious about the setting. The soundtrack is very fitting. A nice mixture of indie rock and slow romantic tunes. Songs such as “Only Yesterday” by Taken by Trees and “Flaws” by Vancouver Sleep Clinic are spot-on working alongside the plot.

On the surface the criticism is easy to pinpoint. These chance encounters are unrealistic. The events that lead up to these two meeting are unrealistic. That’s exactly what the filmmakers want you to convey, that these chance encounters are so rare because in today’s technologically driven society we don’t allow acts of humanity and communication to happen. We miss out on life changing moments that present themselves in front of us on a daily basis, but rarely ever act upon them. It’s why witnessing it in this movie has an emotional and thought provoking impact.

There are some movies that just can’t make you forget them, this is a feeling I get with this movie. It’s genuine, and so are the emotions it makes you feel. You can’t help but root for those two individuals to end up together. The highs and lows the characters experience, we’ve felt them in our lives. The feelings of hurt, longing, hopelessness, and feeling hope. The characters have these deep exuberant feelings of hope and passion that are seeping through, but their situation doesn’t allow them to release it. This inner suffocation of love that might never be realized. Love that’s as dangerous as it is promising if unleashed.

This is an ideal movie to share with someone special. We all desire to love, and this movie made me feel something real. Some of these feelings that it’s sure to bring up. That first look. That first kiss. That moment when you realize that person is the missing link that completes you. The movie is about hope and how love can happen in the strangest of ways. You don’t find it, instead it finds you. It’s a realistic fairy tale, with authentic characters that are conflicted about what they are longing for and what they mean to each other. One night can change someone’s life. No matter how gloomy things might feel, that one person can give you lasting hope, bring out the lost feelings that have been locked inside. “Before We Go” is a simple and beautiful film about real unexpected romantic connections that seem so farfetched in today’s world, but it gives you a glimmer of hope that they can be discovered–if only by a chance encounter.

2 thoughts on “Review: In “Before We Go” You Will Feel Friendship and Love Collide”