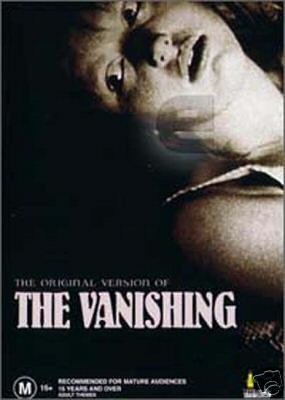 Rex and Saskia are two young lovers on a car trip from Holland to France to do some vacation bicycling together. They make a pit stop at a busy service station for petrol and drinks for the road. Saskia disappears.

Three years later she is still missing without a trace.

If you love to hate the villain, you will positively DELIGHT in detesting this pile of vile garbage in “The Vanishing”.

The oft-used and oddly light-hearted tone, paired with the downright jaunty music bed, plays in jarring juxtaposition to the abhorrent activities we are witnessing performed before us.

In rebuke of the Remake

I saw the 1993 American remake of “The Vanishing” starring Jeff Bridges, Kiefer Sutherland and Sandra Bullock. I remember thinking of it as okay. The film was directed by George Sluizer, who was also at the helm and co-wrote the story for this 1988 Dutch/French original release.

Sluizer got it right the first time. This one makes much more of an impression.

Pouring an Avalanche of salt in a Gaping Wound

Rex refuses to let his girlfriend’s memory fade. He parts with his grip on reality and a new love interest as a result.

Rex begins receiving taunting postcards which he believes to be from Saskia’s abductor. Thus begins a twisted cat-and-mouse game between mentally-deranged hunter and emotionally-damaged surviving victim.

We learn who this sick fuck is before Rex does. A tightly-wound, remorseless self-absorbed sociopath. Who has diabolically deceived everyone around him to believe he is an unassuming college science professor and family man.

And who is also smarter than hell.

And speaking of the netherworld, the endings to the two variations on Sluizer’s chilling theme could not be more disparate. This will resonate should you ever see both of these harrowing efforts.

With that, I shall leave you hanging.

If you love to hate the villain, you will positively DELIGHT in detesting this pile of vile garbage in “The Vanishing”.