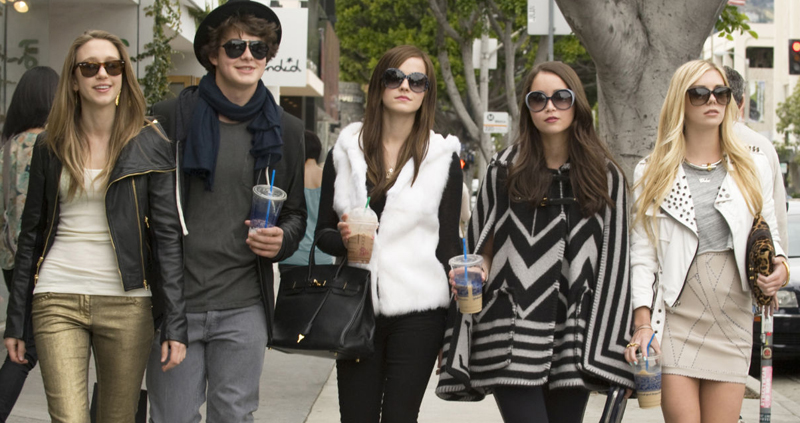 Inspired by actual events, a group of fame-obsessed teenagers use the internet to track celebrities’ whereabouts in order to rob their homes. Oscar Winning filmmaker Sofia Coppola takes us inside the world of these teens, where their youthful naivete and excitement is amplified by today’s culture of celebrity and luxury brand obsession. The members of the Bling Ring introduce us to temptations that any teenager would find hard to resist. And what starts out as youthful fun spins out of control, revealing a sobering view of our modern culture.

Ok, first and foremost, it is MESSED UP how so many celebrities leave their doors unlocked. Lazy? Dumb? Trusting? Whatever their reasons, this careless behavior has invited even more careless behavior in a bunch of fame-obsessed teens. In real life, this gang of blingers shaped an interesting news story thanks to their stupidly far-from-anonymous burglaries that in turn sparked an interesting adaptation in Sofia Coppola’s The Bling Ring.

Sleigh Bells’ Crown on the Ground opens the movie with its powerful amalgamation of blaring sounds. It was loud. It was so loud I could eat my crisps and crunch like crazy and not be the annoying chick in the cinema. It was awesome. It was also a fantastic choice for an opening song as it pumped base, noise, and gentle aggressiveness, setting the scene for an adrenaline-fuelled film. (Or so I assumed). Anyway, it worked well for the beginning, teamed with shots of bounteous bling and expensive possessions, which are interweaved with clips of the celebrity victims to set the story. The music was generally pretty well chosen and used in differently paced scenes. Sofia Coppola definitely had a flare for portraying an enviable, unimaginable lifestyle…well, until reality hit. Infused with drugs, booze, cars, clubs, designer, and dollar dollar bill y’all, this Calabasas pack of brats had a pretty damn good time. They made robbing houses seem like a completely effortless feat, jumping from one house to another on a daily basis after finding celebrities whereabouts and house locations on the Internet. Scary stuff. It became their drug, well, as well as their copious amounts of stolen coke.

I found the acting at times questionable, due to some too-regular awkward one-liners, such as Emma Watston’s almost body-popping stance saying ‘I wana rob,’ followed by no comment. It just seemed weird. I also at times felt that the young actors were trying too hard to be casual during group interaction, and it just ended up feeling uncomfortable and unrehearsed, like it was the first and only shot of the scene. This is not to say that it was like this throughout, but just enough times for it to be noticeable. That said there were some great individual performances, especially from Katie Chang who played cool, calm, collected, crazy, clepto Rebecca Ahn, based on real-life Bling Ring ringleader Rachel Lee. She was entirely convincing as a warped and unfazed robber, it honestly felt like the part came so naturally to her. Leslie Mann also gave a hilarious and mental as ever performance as Nicki’s hippy, spaced out, airy-fairy mom. That kid had no hope. It was great seeing Emma Watson in such a different, unique role. She played a convincing moody, stressed, spoiled teenager, claiming that she immersed herself into reality TV shows for inspiration and role preparation. Her performance was amusing, although not as natural as Chang. She came out with some ridiculous, but jokes, lines that were hard to take seriously, which meant her character sometimes came across a sarcastic parody. The storyline pretty much consisted of a repetitive cycle: Car. Club. School. Celeb Homes. Although this was probably echoing the actual events, portraying the ‘normality’ of it, it eventually got slightly monotonous and dry. I also felt that sometimes the scenes were unbelievably short, feeling more like intermissions that didn’t add any substance to the story. However, there were specific elements that I really enjoyed, for example the intervals in the story, consisting of celebrity photos and clips that frequented the screen to remind audiences that what they saw was based on true events. At times, it gave the movie a news-like / documentary style vibe. During this, a particularly clever part was a fast-flicking scene of celebrity photos shuffling over the screen with the ringing of slot machines in the background, like ‘who’s going to strike lucky and win the next burglary victim title?’ It was a cool touch.

Coppola impressed with her slow-motion scenes that collectively in those few moments had more depth than the rest of the movie put together. One striking bit of cinematography was when Rebecca, having broken into her idol Lindsay Lohan’s home, stood in a glowing aura of soft lights, gently spritzing LiLo’s perfume onto her skin whilst gazing into her mirror. This single shot was incredibly powerful, and I believe was the centre of the story – the absolute fascination with celebrity, the allure of their world that seems so unattainable, yet for these few moments, Rebecca was living that fantasy, she had morphed into her desires. It hits hard that she is in way too deep, and doesn’t even know it, or care for that fact. Overall I enjoyed certain elements of the film more than the film as a whole. It was fun, but I wouldn’t rush to watch it again. I would also strongly suggest it as a film leaning more towards female audiences, or celebrity obsessed boys. You know those times when the trailer is better than the actual movie? Yeah, I’d say that applies here. The trailer is flooded with pizzazz and punch, and that didn’t reflect in the movie as a whole entity.