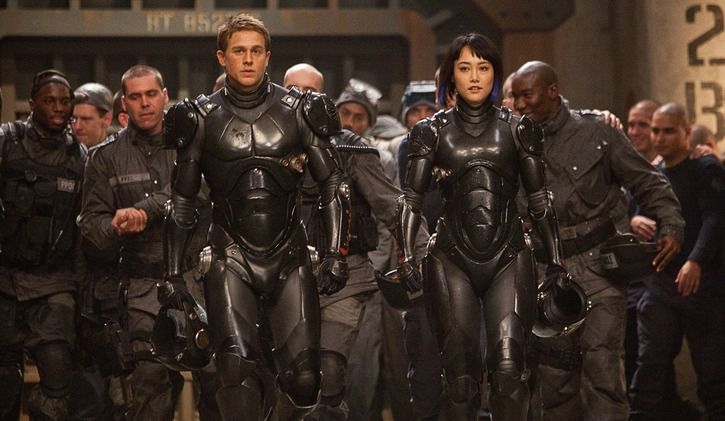 When legions of monstrous creatures, known as Kaiju, started rising from the sea, a war began that would take millions of lives and consume humanity’s resources for years on end. To combat the giant Kaiju, a special type of weapon was devised: massive robots, called Jaegers, which are controlled simultaneously by two pilots whose minds are locked in a neural bridge. But even the Jaegers are proving nearly defenseless in the face of the relentless Kaiju. On the verge of defeat, the forces defending mankind have no choice but to turn to two unlikely heroes—a washed up former pilot (Charlie Hunnam) and an untested trainee (Rinko Kikuchi)—who are teamed to drive a legendary but seemingly obsolete Jaeger from the past. Together, they stand as mankind’s last hope against the mounting apocalypse.

In a word? Awesome. This film unknowingly (or knowingly to some) carries a rather profound development chronology or history, as Pacific Rim ultimately ended up becoming the movie del Toro would work on after dropping out of The Hobbit franchise. While the development of Pacific Rim wasn’t immediate, it came about after del Toro’s real reason for leaving The Hobbit franchise, was to create the live-action adaptation of H.P. Lovecraft’s ‘At Mountains of Madness’ (his dream project). An adaptation which had Tom Cruise set to star and James Cameron set to produce. Del Toro was unwilling to compromise on the $150 million dollar budget and R-rating for ‘At Mountains of Madness’ (I’m with you Guillermo!) which resulted in Universal cancelling the project altogether. (“When it happened, this has never happened to me, but I actually cried that weekend a lot,” Del Toro said. “I don’t want to sound like a puny soul, but I really was devastated. I was weeping for the movie.”) Soon after, del Toro would move onto his next project which was then a 25-page film treatment by Travis Beacham, eventually titled Pacific Rim. Pacific Rim would then go into production by Legendary Films, with distribution handled by Warner Bros. The film maintains a runtime of 132-minutes and carries a $190 million dollar production budget. Watching or anticipating films like that of Pacific Rim always brings a level of apprehension and bated excitement (I’m still in bewilderment how this film was ever actually green-lit). We want to see films like this be made and make no mistake – Pacific Rim is a “must see” on the big screen. But the worry is, there is an inherent ‘fanboy-ism’ that can be attached to movies like this, with the audience that goes to see it but more so the director/creatives involved who work so adamantly to get it made. The results can be scary, especially as a studio that will front the cash to say “Okay, so, giant monsters versus giant robots, it’ll cost me almost $200 million, if not more with marketing? Okay, no problem! Let’s do it!” There is an obsessive creativity with del Toro, and in the same way it’s absolutely brilliant, a wonderful care and attention to detail, you can’t help but wonder “will I be watching Sucker Punch (2011)?” Another film which was an obsessive creation of Zach Snyder, that was lauded (and really was just a bad film) and also was less than half the budget of Pacific Rim (kind of an amazing thought). So along the way as a movie-goer you’ll decide at one point, is Pacific Rim worth my time? Is it a film I feel like I should see? I’m here to tell you, yes. Yes you should absolutely watch this movie. There is something undeniably romantic about Pacific Rim, in the same way it’s a brave film, it’s completely pure and honest. (Again, how/why this film was ever green-lit… is amazing. But I’m thankful for having been able to watch it.) Pacific Rim is a movie for movie’s sake, to put it simply – we need more films like this. Copy the inspiration, not the outcome. That’s exactly what Pacific Rim is, a wholefully original film of cinematic spectacle, inspirationally based on cult classic monster movies and the Saturday morning thrill of yesteryear. The movie has been referred to as a genuine “love letter”, director Guillermo del Toro will echo this statement as Pacific Rim is undeniably “madly in love” with its influences. He’ll go further to describe the film as having an instilled “epic beauty” and (my personal favorite, Pacific Rim) is an “operatic grandeur”. All of these slight descriptions are accurate (and the movie just “kicks ass”).

The movie is based on two simple concepts, the Japanese word ‘Kaiju’ which translates into ‘giant monster’ and the German word ‘Jaeger’ which means ‘hunter’. These initial definitions are given at the on-set of the film, as character Raleigh Becket (played by Charlie Hunnam) gives a narrative of the world as it is in Pacific Rim. Raleigh says humanity has always wondered if there was life beyond the planet, what was always expected was that we would look to the stars if alien life did arrive one day. What wasn’t expected was the sudden appearance of a portal at the bottom of ocean, and ultimately what would soon come through that portal. The first Kaiju appeared in 2013 off the coast of California, and after a 6 day battle with the beast, a nuclear bomb was eventually used to kill it. A majority of San Francisco was left in ruin with countless injured and dead, due to the sudden attack.

It was a global disaster, which would eventually become referred to as K-DAY. What humanity hoped was a onetime occurrence, in fact – wasn’t, as further attacks on coastal cities would continue, the destruction of Manila and Cabo would soon follow. It was then that humanity realized these attacks wouldn’t stop, so the world nations gathered together and put aside their differences to fight. And in order to fight monsters, they had to create monsters. The Jaeger program was soon born. A Jaeger was a giant humanoid mecha, initially constructed to be piloted ‘solo’ it was soon discovered that a single human could not neurologically carry the load of operating such a giant weapon. As such a two-pilot system was created, where the pilots would sustain a neural link with one another, sharing the mental strain which would otherwise overwhelm a single pilot. The neural link was referred to as ‘drifting’ as the shared mind would also be an intimate blending of memories of each pilot. How they feel, emote, react would be based on a mental synchronicity. The better the compatibility, the more successful the end result would be of fighting against the Kaiju. The Jaegers would become the global guardians, as an on-going war would continue for the next several years. Pacific Rim is set in the 2020’s as the audience catches up with the war, how civilization has coped, and what could potentially be the end of humanity as we know it. Did I mention this is the first maybe 15 minutes of the movie? (And I won’t be going beyond that in reviewing this movie.) The film wastes no time setting up, presenting and truly establishing the universe del Toro works/wants to create. (No, it isn’t rushed; it’s paced well throughout from beginning to end. Fun fact: Alfonso Cuarón had a hand in editing this movie.) You don’t have to wait to see the giant monsters and giant robots, and that’s one of the greater achievements of the film. It bypasses that/the standard cliché. Pacific Rim is not subtle, it’s continuously grand as everything about the action is large scale (I don’t recall ever seeing a film, this “BIG”).

There is a visual realism of weight and size to what we see on-screen, it’s majestic in its contrast and scope, and the irony is the film’s actual restriction is your screen size. It’s visually impressive, colorfully earnest, purposefully sophisticated, and carries an exact amount of dramatic (or melodramatic) tone. The characterization is done well throughout, with strong performances by Idris Elba (who plays Stacker Pentecost) and terrific chemistry between male/female leads Hunnam and Kikuchi (who portrays Mako Mori). There is a balance of action, comedy (Charlie Day and Burn Gorman, as Doctors Newton Geizler and Hermann Gottlieb), and a healthy dose of acceptable (or awesome) cheesiness (Ron Perlman, whose character I won’t name). Del Toro works to satisfy both the adults and children in the audience and for both, you don’t stop enjoying what you are watching. The film is meant to be an adventure. It’s meant to be fun. It’s meant to entertain and leave you with a true sense of wonder. (Another fun fact: Approximately 40 Kaiju were created for this film and ultimately only the best were selected to be the antagonists. The same goes for the Jaegers which appeared: prominently, briefly, didn’t appear, etc. – there was a lot left out.)

Yet in all the ways Pacific Rim’s scope is broad and intended audience is broad. Its marketing has been specific, perhaps mistaken and what might eventually result as being unsuccessful. (I’m reminded of John Carter from last year and 2010’s Scott Pilgrim vs. The World which carried niche audiences.) Like the interdimensional rift at the bottom of the ocean depicted throughout the movie. The same rift exists in regards to the line of success which Pacific Rim walks. But the fact remains, Pacific Rim does exist. It exists as a real movie that has (unbelievably) been created and made. It’s in your theatres right now.

And again, yes, you should go watch it.

One thought on “Review: Pacific Rim, an operatic grandeur”