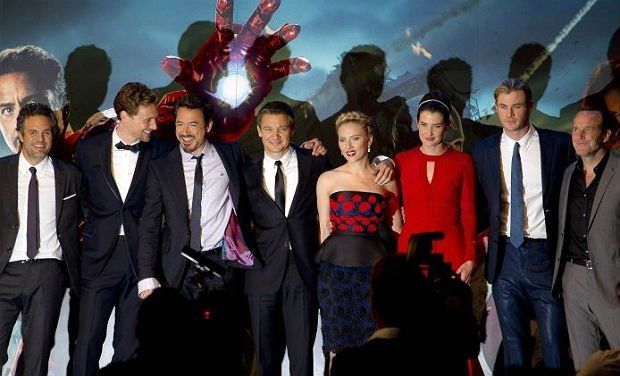 Elliot Hopper directed me toward this article regarding the cast of Marvel’s The Avengers strongly negotiating their salaries with Marvel regarding the planned sequel, Avengers 2, and beyond.  The article references the big pay day for actor Robert Downey Jr. for The Avengers in which the film itself went on to reel $1.5 billion:

Robert Downey Jr is set for another huge payday from a mega-hit Marvelmovie, this time Iron Man 3. I’ve learned he’s already made $35 million from the actioner which grossed $680 million worldwide in its first 12 days. He should exceed his biggest payday to date — that $50M from The Avengerswhich I’ve learned was more like $70M-$80M now that the film is all in. But it’s reallyAvengers 2 where he’ll clean up big-time — if he wants to reprise the role.

Deadline then recaps the negotiations between Downey Jr and Gwyneth Paltrow to appear in further Marvel films. The stars have publicly stated that they’re unsure whether they will reprise their roles in future Marvel films, which can be interpreted as a negotiation maneuver to encourage studios to increase salaries. The article then moves on to the remaining stars who didnt receive a $50+ Million dollar payday for appearing in Marvel’s The Avengers.

Much less so Scarlett Johannsen (paid to pop up in Marvel movie after movie), Chris Evans (whom some sources say made his deal for Avengers 2 when he signed for Captain America 2), Chris Hemsworth (a much bigger star now than before and unsigned for Avengers 2), Mark Ruffalo (whose Hulk role already was cast 3 times and could be the most vulnerable), Jeremy Renner (probably grateful for more exposure), Samuel L. Jackson (Scarlett’s doppelganger) among others who were paid pittances for their first movies, not much better for the sequels, and are counting on at least $5 million upfront and better back ends for Avengers 2.

Delving deeper into the issue is the inclusion of a Q & A with Avengers 2 director Joss Whedon who had the following to say about  the issue:

DEADLINE: Marvel is notoriously cheap and some of the Avengers cast will want more money for the sequel. How could that affect Avengers 2?

WHEDON: I’m not going to comment specifically because I’m not privy to that sort of stuff and I don’t think it’s my place to talk about. In general terms, yes – Marvel can be very cheap, God knows. They can also be sensible and frugal. They have a very small infrastructure and they’re not heaping this money on themselves. I don’t know a producer who’s done more and is paid less than Kevin Feige. I think that it’s an issue but it’s part of a bigger issue, which is there was a time when there was a crisis in the acting community where stars were getting $20 million and character actors were disappearing as a concept. There were no middle class actors. It was suddenly bit players and Jim Carrey, and that was it. Now the studios have gotten to a point where they’re like, “Do we need that star?” With what they’re able to to digitally and the way they create franchises there’s a little bit of a feeling of, maybe we can eliminate the actor – not totally and not totally cynically, but I’ve literally heard people at the agency say, not about Marvel, “This studio is eliminating the middle movie. They’re not making dramas or prestige pics or anything that isn’t either a franchise or a Paranormal-style found footage”. I think that changes the landscape for actors because really good actors are interested in doing a franchise because they need something.

DEADLINE: So are you worried about losing talent over these kinds of disputes?

WHEDON: I feel good about Avengers because I feel everyone who took it got something to sink their teeth into. They weren’t hung out to dry. It’s not a soulless piece of work. It may be inept in some places but I meant every word. Marvel distinguished themselves by going after good actors, writers, and directors who were unexpected choices. One side to that is they don’t have to pay them as much. Me, [Jon] Favreau, [Kenneth] Branagh, James Gunn – we don’t have giant action quotes, but we’re all filmmakers who want to do something with a giant action movie instead of just accomplish it. And the actors, from Downey straight on through, they only went after the people who could get it done. So how come they’re not getting giant quotes on this movie? There’s the element of the opportunity here for something that is both popular and very human, and usually you have to choose as an actor.

I’m not surprised about the need for negotiation, considering the gross figure for The Avengers, I find some of the tactics distasteful. I truly believe that both sides have a legit argument.  The studio likely feels that the value of the exposure in their films should be weighed and considered during salary negotiations. In some eyes Avengers star Chris Hemsworth is an example supporting Marvel’s perspective. Hemsworth earned an impressive $8 million payday for Snow White and The Huntsman while adding Thor and The Avengers to his resume in a seemingly short time frame. The actors naturally feel that the next Avengers film has strong potential to earn even more at the box office than the first film and their salaries for future appearances should be respectable of that fact in light of proven success.

I fine the whole situation fascinating in a ‘WWE’ sort of way but at the end of the day I currently have a great deal of confidence in Marvel’s casting decisions.  On one hand I’ll be relieved if we continue to see the faces that are familiar with seeing portraying our beloved characters, and on the other hand Marvel has shown success in casting and recasting major characters.