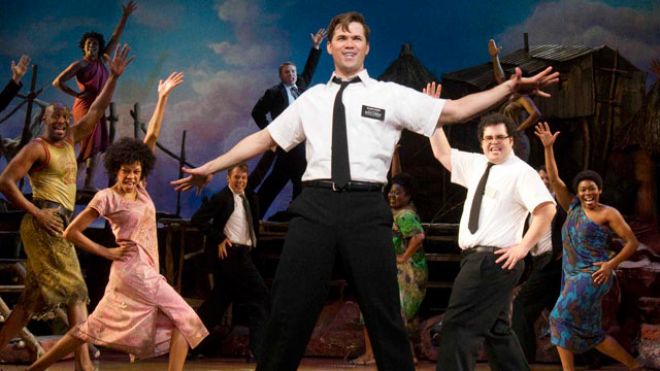 The musical “The Book of Mormon” is closing its 3-week off Broadway run in Denver this upcoming weekend. Rarely does this movie buff attend popular Broadway musicals. However, I had heard so many great things about this stage production I couldn’t help myself by getting tickets as soon as they were available. When someone who hasn’t seen a musical performance in 15 years tries to purchase tickets when they went on sale, then the product really does have a high demand. I just had to see it! I am dumbfounded the tour and the venue hosts were surprised that three weeks of shows sold out in just three hours. Demand was so hard that the Denver Center of the Performing Arts website crashed! And it broke records for the Ellie Caukins Opera House. Usually I am in this venue to watch the big films at the annual Denver Film Festival and not a Tony award winning stage production. Let me declare that “The Book of Mormon” might be one of the greatest pop-culture experiences in the second half of my lifetime. As someone who doesn’t like the song and dance genre nor a diehard “South Park” fan, it really lived up to the hype and took this genre and the “South Park” creators to a new level. Raunchy and vulgar, ‘Mormon’ invokes the theology of the Latter Day Saints and adds many cultural references. Numerous musical numbers were very amusing gut busters especially “Man Up” and “I Am Africa.” The pleasant surprise for film geeks involves numerous references to please those saturated with sci-fi, geek culture. [minor spoiler] To my shock, Yoda and Darth Vader have very minor supporting rolls. [end spoiler] A movie this would be perfect for would be Comic Con attending Fan Boys jaded from living in Utah or Idaho. This isn’t so much for the politically correct “GLEE” crowd as it is for most people who enjoy witty, outrageous, media savvy humor. Between this and “South Park,” Trey Parker and Matt Stone are some of the most intelligent auteur of our culture. And I don’t typically don’t watch their stuff, but I certainly respect their contributions.

Now let me say, with the popularity of this musical and the strong and positive reaction it received from someone like me, “The Book of Mormon” must to be made into a movie. This needs to happen immediately. Parker and Stone had mentioned to Entertainment Weekly that they will eventually adapt this into a movie. So the question isn’t if, but rather when this will happen. And as Hollywood struggles to create movies people actually want to see, they should get a try to get something off the ground and excite the fans of the musical with an announcement. Paramount-Viacom, which distributes “South Park,” had a terrible summer at the movies with an underperformance of “The Dictator,” the shifting release date of “GI Joe: Retaliation,” and the Katy Perry Musical bombing at the box office. They need to get the gears moving for a “Book of Mormon” movie to avoid more summers like the ones they just endured.

One thought on “Kenny Sayz, What’s the Hold Up? “Book of Mormon” Should Immediately Be Adapted Into a Movie!”