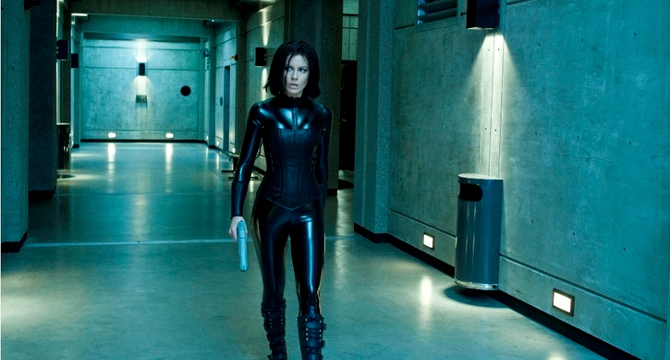 Introduction: Underworld: Awakening is a 3D action horror film which is also the second sequel and fourth film within the Underworld franchise. It stars Kate Beckinsale reprising her previous role of Selene, with Måns Mårlind and Björn Stein directing. When human forces discover the existence of the vampire and lycan clans, a war to eradicate both species commences. It is up to Selene to lead the battle against humankind. The film also stars Sandrine Holt, India Eisley, Theo James and Michael Ealy.

Review: Underworld: Awakening is the fourth installment in the franchise that began in 2003. Since then it has garnered both a healthy cult following and relative success. The first Underworld film debuted during a resurgence of the ‘monster’ genre. Theatres saw films with vampires, werewolves, zombies and the like on a relatively consistent basis. Welsey Snipes reprised his Daywalker role with sequels in both Blade II (2002) and Blade Trinity (2004). George A. Romero’s Living Dead franchise returned with a re-make of Dawn of the Dead (2004) and a follow up with Land of the Dead (2005). There were also supporting films like 28 Days Later (2002) and smaller scale films like Skinwalkers (2006) that lent itself to the genre. Then we had big budget films like Van Helsing (2004) trying to capitalize on it all.

And perhaps most importantly, in respect to Underworld’s own relevance today, we were introduced to the start of the Resident Evil (2002) franchise starring Milla Jovovich. Because in some ways or in most, both the Underworld and Resident Evil franchises, today, share relative similarities. Both star strong female leads. Both have generated multiple sequels and both leads are married to their director/producer. That last one is perhaps a coincidence, but the main point is that both of these franchises inherently come from a different era then what is familiar today. There was a constant search to create franchises with long-lasting appeal, but more than that create franchise characters. With the added push to adapt every comic book super-hero to film around the same time, costumed characters on the big screen weren’t an imagination anymore. These movies grossed big and gave audiences something atypical to the usual film genres, in some ways it blurred the genres themselves. Add a mix of the familiar or unfamiliar with perhaps say ‘monsters’ and it was a different recipe to success.

Hollywood is both a strange machine as much as it is a predictable one. In the forever search to fill theatres amongst its varied audience, it will continuously look to what is hot, simply re-use, reboot and re-sequel whatever is necessary to keep its engine running. So when Underworld: Evolution (2006) left the franchise open-ended, it was always a question how and when the next sequel would return. And even when Kate Beckinsale hung up the black leather for good in 2007, opting to return to smaller scale films and devote her time to raising her daughter. Hollywood still found a way as Underworld: Rise of the Lycans released in 2009. The third film continued the franchise as a prequel, describing the history of events which actually started the war between the vampires and lycans. The prequel also gave an opportunity to flesh out characters who were killed off to return, bringing back the familiar and allowing its fan base to associate more so. Underworld wouldn’t be Underworld without a female lead, so Rhona Mitra was cast as Bill Nighy’s Sonja. If you’re a fan of the series, you know the history.

The one proponent of the franchise has always been its stylistic gothic settings. Dark in tone and laced with heavy mythology, Underworld also lent itself well to those enamored by the folklore of both vampires and werewolves. The franchise earned its cult success in that manner, due to its added care to detail of placing old sensibilities in a modern world and how it related. It was an underworld. The fourth film Underworld: Awakening breaks all that down. As much as this film is a sequel to the franchise overall, it is also a continued sequel to Kate Beckinsale’s character Selene. However more than that, it is a reboot to the franchise itself.

As a film, Underworld: Awakening is self-aware. It knows where it is in relation to films today, it knows why fans of the franchise will come see this sequel but it’s also smart enough to know that it needs to self-perpetuate itself. So it contains a story simple enough, providing an exact amount of answers and leaves the rest both ambiguous and assumptive. In some cases, it doesn’t even explain the logical, for the sake of entertainment and to keep the characters moving, you just go with it. In the same vein Awakening doesn’t try to win over everyone as that would be pointless. It feeds the fans of the franchise first but also starts with a fresh enough slate that is enough for newcomers. Yet in that same sense it undoes and unfortunately confuses a lot of what it has already been created. Retconning parts of the detailed mythology perhaps accidentally for the sake of story. An honest mistake, ignored continuity or something left to be answered? This sequel, at least, doesn’t provide you with these answers.

The film opens up with a montage of important events from the previous films in the franchise. Kate Beckinsale’s Selene provides a monologue to the scenes, as it’s an invariable ‘catch-up’ to how the events have passed and what they’ve essentially culminated into. The secret war between vampires and lycans is somehow made public and humanity begins its attempt to rid itself of both species. They are regarded as a disease to society and the cure for humans is simply eradication. Awakening quickly works to establish the months that followed its previous sequel Evolution. With both Selene and Michael on the run as hybrids, they decide to seek solace by fleeing their countless pursuers. Yet before they can escape, both are separated by an explosion that results in Selene’s capture. Selene finds herself awakening from cryogenic suspension twelve years into the future, into a familiar but unknown world. Vampires and lycans have reached points of mass extinction, Michael is presumably dead and somehow Selene has a hybrid daughter. Awakening has the shortest runtime of any of its predecessors at 88 minutes. It’s methodically paced because of this and probably has the most consistent action of all the films in the franchise due to its length.

However its runtime is also a testament to how Underworld has changed. While the first two films starring Beckinsale worked to provide both a balance of answers and action, Awakening is setup to become a part of a new trilogy and purposefully withholds more than it should. The setup perhaps for now is two more sequels or one final sequel and another prequel to explain the lost twelve years. At this point, it’s just unknown.

I won’t delve into the story anymore than that, as the film simply paces its own events to answer this small arc of a new story. The name of the film is also an association at this point, as the ‘underworld’ no longer exists. It’s a disappointing notion mainly because if you’re a fan of the franchise the same inherent care of what is established previously are remnants now. However in that same guise, perhaps it does play credence to this whole new world that the franchise presents. With certainty though, Underworld: Awakening allows the franchise to now fall under the same tent pole as the Resident Evil franchise. While the latter is definitely ‘more campy’ both franchises do not pretend to be something they are not. It’s rare to see a franchise get a fourth iteration and still have that franchise be warranted, sustainable and let alone be entertaining. Arguing which is the better franchise is a moot point – they are both simply guilty pleasures.

For some Awakening might be that matinee movie experience, to others it might be the inherent jumping of the shark, cult fans might eat it up and undoubtedly there are those who are just driven to see Kate Beckinsale don the Death Dealer outfit again. There is a varied enjoyment and disappointment overall and perhaps that’s Awakening’s own balance. The film was shot in 3D and not post-processed and because of this there is a more natural sense to the depth of field which appears on screen. Although given the choice, I’d say the 2D version would suffice as it’s always been an argument of mine that there is a big difference when something is simply shot in 3D versus something that actually conceived and filmed in 3D. There aren’t any or enough moments that warrant the 3D visually other than the increase in price of a movie ticket. Tonally it’s an interesting thought, as the Underworld franchises have always been dark in nature. So the visuals do have an interesting pitch to them in regards to what wearing the glasses will do.

In any event, I am guilty of enjoying this franchise as much as the Resident Evil movies. However, I take exactly what I get from them and don’t inherently expect too much or anything at all. So with Underworld: Awakening simply watch, enjoy and forget.

I give Underworld: Awakening 6 out of 10.