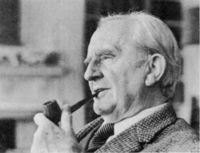 So who is the Lord of the Lord of the Rings.  According to copyright law, the estate of JRR Tolkien is the rightful owner to those works and therefore they had to make a deal to let New Line make these movies.  And they claim New Line didn’t pay their share, so they are suing them.

The estate Lord of the Rings creator JRR Tolkien sued New Line Cinema on Monday for 150 million dollars, claiming the Hollywood studio cheated it out of a share of the profits from the movie trilogy that earned billions of dollars.

The lawsuit, filed in Los Angeles also sought to strip New Line of the right to make any more movies based on Tolkien’s work – endangering New Line’s plans to produce two Hobbit movies over the next two years.

I find it convenient that they sat quietly swimming in the unearned money Grandpa Tolkien got them until the dust settled on the Hobbit prequels.  Then the ball gets rolling in earnest on the Hobbit and suddenly the vacation is over and they make a pitstop at the lawyer’s place before laying down before the bulldozer.

I do think that the estate of Tolkien deserves their fair cut from the films and if they are not being given their contractual due then yes, New Line should own up to it.  Seems a little like good timing to bring up the issue now that the fate of two MORE money making giants appear to be headed into production.  Of which they no doubt would ALSO earn their 7.5% of.   They are holding this production ransom to force what they want.  I don’t even know if they are legit in their claims.

This just makes me sick of all the bad mojo surrounding this franchise.  Its like watching kids fight on the playground, making up just so they can start a different fight.  Just get it solved so you can go back to doing what we all WANT you to do.  Make movies.