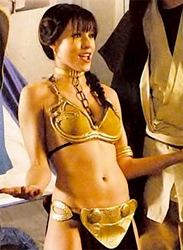 One of my most anticipated films ever has been Fanboys. Its taking forever for this thing to come out, and its been a LONG time since I heard about it being made. For those of you unfamiliar, the story is about a group of dedicated Star Wars fans in the late 90s who have a friend who is dying of cancer. It doesn’t look like he will live long enough to see Episode One so they set up a crazy scheme to break into Skywalker Ranch and steal it so they can share in their common passion of Star Wars with their friend.

The “dying of cancer” storyline was completely dumped, and, instead, the fanboys are now trying to sneak a copy of Phantom Menace simply because they’re fans and want to see it. According to my source, the story is now “disjointed, nonsensical and lacking any heart.”

After a pile of test filming, they have decided to go with the version they spent a ton of money rehashing. Maybe just to justify the spedature of an extra $2million.

I think this is totally the wrong way to do this. The cancer story gave us a believable “in”. Why else would crazy fans want to go to such lengths to see this unreleased movie that will just come out in general release a little later. There is no urgency. Why risk everything just to say you did? Its an empty motivation, and as suggested it removes the “heart” from the film.

This is what made Superbad such a good movie. It wasn’t the cussing and awkward teen sex gags that made it great, it was the heart in the middle of all the gags. This is something I was hoping to see in Fanboys. Mostly since it is about Star Wars (which I am a superfan of) and because it had some real story value. Now it looks like they are making it into a fluff gag movie.

The very fact that this movie is called FANBOYS means that fanboys are going to be the target audience. Fanboys are passionate about their fandom, and this film deserves better.

If I find out they removed scenes of Kristen Bell in the Slave Leia costume I am going to stage a boycott.

If this does wreck the film, I hope one day a directors cut for this film comes out so we can see which version we really would have wanted.

13 thoughts on “Re-Edits a Concern for Fanboys”