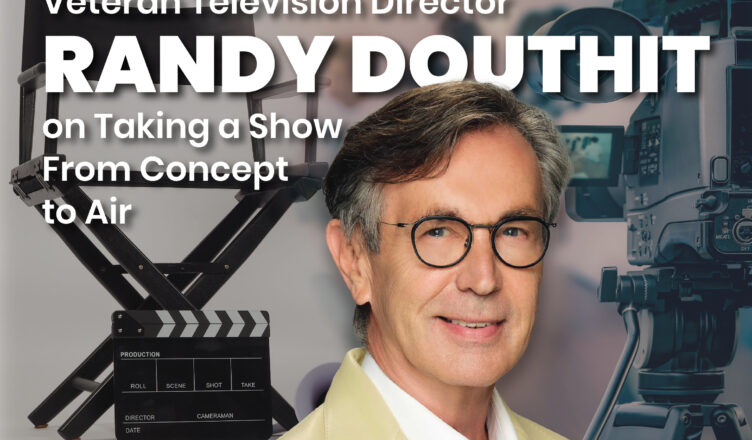 Randy Douthit knows what it takes to get a show on television.

How do you know if it’s a great idea or just a passing fancy, like when you tell a story to somebody, and they say, “That will make a great movie or TV show”? The television business is a fickle business; it’s about risk and reward with millions at stake.

Does anyone know if a show will be a hit or a miss?

In any given year, hundreds of pitches are made — to the four major American networks (NBC, CBS, ABC, FOX) and streaming channels like Netflix, Hulu, and Amazon — but few are chosen.

Fewer still are given the green light or the $2 million to $5 million necessary to make a pilot program, not to mention the significant time commitment.

The odds are not good.

When it comes to a hit, “Overspending is relative,” declares Ted Sarandos, co-chief executive officer and chief content officer for Netflix, adding if the show is a hit, it’s “money well spent, the way it is for [hit series like] House of Cards or Orange Is the New Black.”

business, you’re only as good as your last success. One has to have a stomach of steel and the staying power of a racehorse winning the Kentucky Derby.

At its best, the rewards can be enormous — in the millions of dollars. At its worst, the person who has the idea and shepherds it through to the pitch can feel like a child asking his father for a 10-cent increase in his weekly allowance.

How Randy Douthit Does It

Randy Douthit has a successful track record. He’s been a director and executive producer and has had a hand in No. 1 shows like Crossfire, Larry King Live, Judge Judy, and, currently running on the Amazon-owned streaming channel Amazon Freevee, Judy Justice.

A string of hits does not, however, guarantee that a show will be picked up, so he has a step-by-step process to give him a fighting chance. It all starts with an idea. It takes time to gestate, articulate, develop, identify the potential audience by demographic, and understand how it may relate to similar shows past or present. Then the process needs collaboration: other people to understand it and develop the intangible concept into a product.

Says Douthit, “I may have a small group of people, of development people. And they’ll have some ideas for different shows. I’ll have an idea for a new show.’’

Then the collaboration begins.

“Once we discuss it and flesh it out a little bit, then we put pen to paper and write a treatment,” he adds.

A treatment is industry-speak for a composition that describes the show, the main point, the characters, the mise-en-scène, or stage design. It might be as short as one page in length, and there’s no length limit. “If the treatment pops, if the treatment works, then we’ll go ahead,” Douthit explains. “The next step is to do a presentation tape.

‘’It’s sort of like a pilot, but it’s only a five-minute presentation.’’

Randy Douthit and His Team Go for the Green

The next step is essential because it requires a significant investment of time and dollars.

Says Douthit, ‘‘We’ll add music, we’ll add other elements to emphasize the story, we’ll add whatever it takes. We also have to keep in mind what audience it’s for.

“We have to decide who it goes to and then make sure it’s compelling. If it is compelling, you can get away with a lot.”

A crucial element not apparent to many viewers is a show’s soundtrack. “Music is important, more important than you think, because it sets the tone. It gives you a feeling,” Douthit explains. “People want to be attracted. You can’t have music that goes ‘screech screech’ … You’ve got to have music that’s inviting.”

The veteran producer reveals that for Judge Judy, they were using a version of the evergreen classic “Symphony No. 5” by Beethoven. For their latest collaboration, Judy Justice, Douthit couldn’t use the same composition. “So I went through a couple of music producers. Nothing really caught my ear.

“Eventually, I went back to the fellow who produced the Beethoven music and he produced something else that fit. So it’s really that simple. You don’t stop until you get it. You stress a bit. You stress it out. OK, this music doesn’t work. This music does.  How do we incorporate it? And then I get everybody to sign off on it. They have to say, OK, I like this. And that may be one of the most difficult aspects of the job is to find the right person and get them to OK it.”

Randy Douthit Has It Ready for Sale

The next step is to shop the presentation tape in hopes of getting the series greenlit. “Right now, I’ll pitch it to Amazon first because I have a deal with Amazon,” says Douthit. “And then we’ll take it from there, see if they like it. If not, we’ll do it someplace else. Or we’ll come up with a different show, something they may be more interested in.”