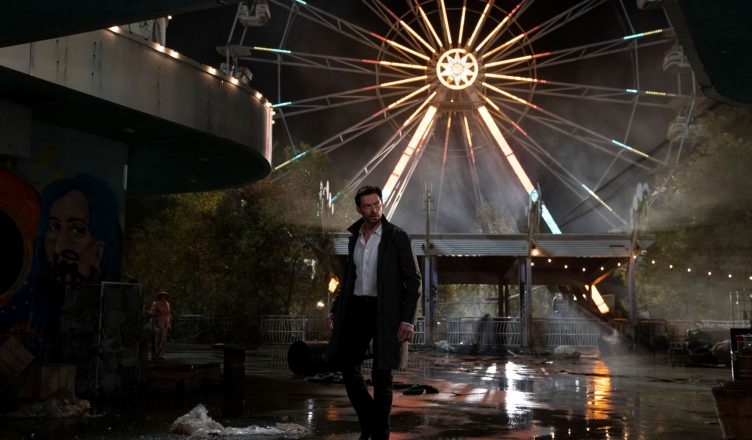 The budget for Hugh Jackman’s new film “Reminiscence” was $68 million. For this, you get a peek at Miami “after the flood” caused by global warming and a journey into a nearly submerged Miami constructed by “West World” creator and first-time film director Lisa Joy. The sets for sunken Miami were built in New Orelans in an abandoned theme park. Debut Director Lisa Joy says that one of her greatest thrills was walking on set for the first time. This is a futuristic world in which a machine designed, originally, to interrogate prisoners via their dreams, is now used in a post-war society as a way to  stroll down memory lane.

A private investigator of the mind (Hugh Jackman as Nick Bannister), assisted by his former partner in the military (Thandiwe Newton as Emily “Watts” Sanders), helps clients take a stroll through time in a world where “nostalgia never goes out of style” and “the past is addictive.” Jackman has the right hypnotic vocal quality to guide time travelers. He fills the bill as the Bogart-like centerpiece of a noir thriller that has more than its share of original scenes and images. (Death-by-piano and Nick’s head submerged in a tank full of electric eels, giving his sidekick Thandiwe Newton a chance to play a kick-ass female rescuer were firsts.)

Various customers come and go in the converted bank building that Nick and Emily use as their dream-trip headquarters. Each individual  gets in an immersion  tank, has electrodes attached to his/her head, and receives a shot in the neck, which helps him or her to revisit the past. Each filmed memory becomes a part of the plot puzzle, a plot that is tremendously complicated. There are so many threads of the plot that must come together to form a complete whole that it destroys some of the film’s momentum.

The holographic images used for the dream sequences were also fantastic, created by Cinematographer Paul Cameron who said, “It needed a certain holographic reality, so the challenge, for me, was to create this illusion for the memories live on set.” Cameron, who had worked with Director Lisa Joy on “West World,” used halo gauze material, a projection system, and a curved screen. The thin mesh was stretched in the shape of a half cylinder and three 20K projectors mapped on the circular screen, including a Sony Venice 4K camera using TODD AO 2X anamorphic lenses for soft vintage-looking rear projection.

The cinematographer can take a huge bow. As he said, “You’re laser projecting onto this fabric that has been stretched into this curved shape that’s a little out of focus.” Said Cameron, “It’s a layer within a layer and so that becomes the syntax of the film. It gets very tricky with Jackman and Ferguson, popping in and out of memory, especially when he even steps into hers for the most surreal moment.”

Let’s talk for a moment about that “most surreal moment.” Even made-up worlds usually have rules about how they work. I commented to my companion that it didn’t seem “right” that Jackman’s character could simply step into a dream sequence that is being replayed, when it  was originally a scene between Rebecca Ferguson’s lead female character Mae and the crooked cop Cyrus Boothe (Cliff Curtis). Some of the “rules” of this future world are spelled out for us. For instance, we know that when a subject is in the tank, if they are asked to summon a memory that they don’t have, they have a fit, like little kids watching  video games who sometimes fall to the floor and have seizures. I wanted to know the “rules” for one character, stepping into the memories of another on replay. Nevertheless, I  enjoyed the “step into my dream” sequence, despite wondering if it was really “allowed” in this Future World.

Besides the Cinematographer’s revolutionary achievements, the sunken world created by the special effects and set people were truly outstanding. Some have mentioned “Inception” as a similar film. That is not surprising, considering that Jonathan Nolan (a producer on this film and husband of the director) is Christopher Nolan’s brother.

The noir attitude, lighting and theme are similar to “Chinatown” and “L.A. Confidential.”

While I thought Hugh Jackman was solid in his role,  I wasn’t as firmly onboard with the casting of Rebecca Ferguson, the Swedish and British actress who starred opposite Tom Cruise in “Mission Impossible: Rogue Nation” (and is set to star in the next “Mission Impossible” film.) Even though Ferguson appeared in “The Greatest Showman” with Jackman previously, portraying Jenny Lind, as a romantic duo they don’t generate “heat” onscreen. It’s hard to define what this quality is, but when the couple onscreen has it and it works, you know it. When it doesn’t, you may find yourself saying, “What does he see in her?” or “What does she see in him?”

Rebecaa Ferguson, for me, was curiously unconvincing as a femme fatale who instantly mesmerizes at least four of the male characters while performing in seedy nightclubs. She was distant, uninvolved emotionally, and could have been replaced by any attractive female leading lady. (SPOILER) When she ingested some mysterious drug and jumped off a building, I didn’t mourn her passing.

The song “Where or When” is integral to the plot. We hear Ferguson singing it. Her singing, as well, is so-so. It was hard for me to understand how Ferguson could so reliably captivate so many men so quickly.

Rebecca Ferguson, for me, was part of the reason the film as a whole did not “work.” She is an oddly inert presence throughout. She doesn’t engage us. She is remote. Detached.  Is it because Ferguson’s character (Mae) in the script is ambivalent, presented as both bad and good? For much of the film we are convinced she is a scheming manipulator. However, from Jackman’s POV, she is his angelic dream girl. Which is correct? It takes the entire film to find out. It is hard to root for her or to root against her, because we are not told whether she is good or bad. She does have an extremely ritzy wardrobe for a girl without electricity in her apartment, and is pictured in clothes-with-midriff-cutouts in nearly every color. Very high fashion. I jotted “Quite the wardrobe for someone with no money for electricity!”

Many have expressed their unhappiness with the script. It was on the Black List, as it is called, for some time, which is a list of the best scripts out there that have not yet been made into films.

But what about the actual words the characters speak?

Here are some lines from the script. Decide for yourself if they are good or bad lines:

“The past can haunt a man.”

“Just a series of moments, each one perfect. A bead on the necklace of time.”

“Late is a construct of linear time.  We don’t deal in that.”

“Time is no longer a one-way stream.”

“The past is addictive.”

“You can’t remember something that never made an impression.”

“We’re all haunted by something.”

“There is no such thing as a happy ending.”

“You’ve been had and you don’t even know why.”

“Stay here in this life. Stay here with me.”

“The barons stay alive by drowning everyone else.  Only the rich mold the world to their delusions.”

“When you’re young, you think the future will play out like dominoes.  You have no idea the things that are lined up.”

“Nothing’s an accident with Mae.”

“When the waves came they washed away our lives.”

“You’re an empty man looking for a woman to blame.”

“I was so stupid to think that falling in love could save me.”

“Love is the thing we cling to.”

“Missing people is a part of the world.”