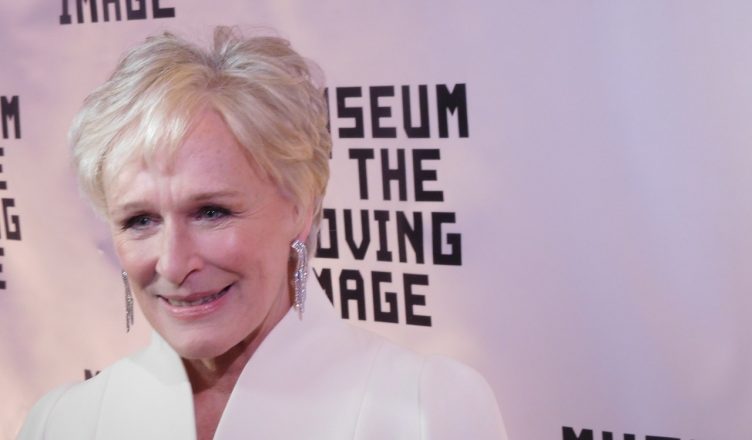 Glenn Close’s long and illustrious career was honored by the Museum of the Moving Image Monday evening at their annual gala tribute in New York City.

Featured speakers who introduced clips from some of her film roles — there have been more than 80 —were Ethan Hawke, Christian Slater, Bob Balaban, Michael Barker and Jim Dale. Via video, praises to the actress were sung by Michael Douglas, Kevin Kline, Rose Byrne, Bobby Cannavale and Tiffany Haddish.

The movie clips ranged from Close’s first movie, “The World According to Garp,” to “Dangerous Liaisons,” “The Big Chill,” “Fatal Attraction,” “The Natural” to her most recent film, “The Wife,” which is certain to earn her her seventh Oscar nomination. (She has yet to win.) Other work includes, beginning in 2007, her starring role in the legal thriller “Damages,” which ran on television for five seasons.

Although the evening was focused on Close’s legacy on film, Jim Dale shined a light on her accomplishments in the theater, which is where they met some 45 years ago when they did the musical, “Barnum.” He played the titular character of P.T. Barnum and she played his wife. The both learned to walk a tightrope and fly on a trapeze. The role garnered Close the first of four Tony nominations. “Once you’ve worked with Glenn, there’s not getting away from her,” said Dale in his praise of Close. “As stern and forbidding as she can be on the screen the close up of Glenn Close is as warm and informal as you could ever wish.”

On the red carpet I asked Close what was key for finding her way into a character. “There’s always a period where you go, ‘I don’t know how I’m going to get into this character. And then if you’re lucky and you keep at it, and you know your craft, there comes a moment where you can find a common humanity in something in your imagination that feels right for that character.” Then she said something magical just clicks but “some are harder than others.”

In her gracious acceptance speech at the end of the evening, Close said of the award, “This is actually a very emotional event for me. Getting an award like this in the town where it started means a lot.”

Close said, “The first thing I want to do is thank my friends who were in all these movies and plays with me. I wouldn’t be here without them.”

The actress recounted a story about actor Kevin Kline when they were making “The Big Chill” in Beaufort, South Carolina. “He had just done ‘The French Lieutenant’s Woman, and he left us. He along with Bill Hurt was the big, big star. Bill was a big star, Kevin was the up and coming big star,” she said. “And Kevin, we always would tease him because he looked in the mirror more than anyone else.”

Close spoke of her producing duties on “Sarah, Plain and Tall” and how she had to fight to cast Chris Walken as a farmer — a clip of which was shown earlier in the evening — to the opposition of studio executives who wanted Don Johnson. “And I said, ‘This is so easy,’ not anything against Don Johnson, but I said, ‘I want Chris Walken.’ They said ‘But he’s so scary, and he can’t play a Kansas farmer.’ He was magnificent, and so beautiful, and we stayed friends.”

She noted of receiving the award, “It’s humbling and, okay, kind of confusing, trying to figure out what to say when given an award like this. I don’t feel wise or particularly insightful. If anything, I feel more aware of the fragility of it all… And the fact that my very subjective choices that seemed like a good idea at the time have actually added up to a body of work that matters to people, is something I’ll never get used to.”

Close spoke of those moments where she searched for ways to find her ways into a role. “I think moments where one feels totally devoid of inspiration, and an entire crew is watching, and the minutes are ticking by, and the producers are looking at their watches, and a terrible panic starts grabbing you by the throat because you know you don’t have it, and you have no clue as to what it is and where it will come from. Moments that demand a simplicity of truth because that’s the only thing that connects, and without it you might as well get into another line of work.

It happened with István Szabó on the set of “Meeting Venus,” when he sensed my distress, and came over and put his hand on my shoulder and whispered, “Not to worry. We’re waiting for the angel.” It happened with Adrian Lyne on the set of ‘Fatal Attraction.’ In the scene where Alex has slit her wrists, but you don’t find out until we see blood on Dan’s face, and I was terrible, and struggling, and Adrian came over and whispered, ‘Try to laugh.'”

She recounted this experience from her most recent film, adapted from Meg Wolitzer’s acclaimed novel. “It happened with Björn Runge, who looked me in the eye before we started shooting ‘The Wife,’ and whispered, ‘You can trust me.’ And then proved that I could. It’s because I’ve had so many brilliant people constantly whispering in my ear that I’m here today.”

Close went on to say her favorite acceptance speech of any kind was when Maureen Stapleton won the Oscar and said, “I want to thank everyone I’ve ever met in my entire life.” Close said she felt that way and went on to thank her college professors who helped her find her way when she attended William and Mary College. She thanked her best friend Mary Beth Hurt, “who I understudied at my first job.” She thanked her daughter, actress Annie Starke, who plays her younger version in “The Wife.”

Her thanked her publicists, in particular Kevin Huvane, who accompanied Close on the red carpet. She recounted one evening at a low point in her career when he cheered her up. “At  11:30 at night, the doorbell rung on my apartment, and at first I thought, ‘Oh my God. Do I dare open it? Who is it at this hour?’ I did, and it was a bunch of yellow roses with an incredible note from Kevin. Something to the tune of like, ‘Don’t let the fuckers get you down.’”

Close went on to thank her costume designers, wig makers, make up artists. “What a luxury it is to be in a profession where you could go to work looking like a bag lady and come out in an hour and a half later looking fabulous.”

She noted, “If it wasn’t for all the DPs who have worked their magic on me all these years, I certainly wouldn’t be here today. Although one of the things I tend to hear most from people who recognize me is, ‘You look so much better in life than you do in the movies.’ I always wanna say to them, ‘Do you really think that’s a compliment?’ I guess it’s better than … I guess I have a few years to go before they’re saying, ‘Weren’t you somebody?’”

Close concluded her speech by thanking the producers, directors, actors — “too many to mention” — who have helped her on her path. “For me, the process, the process is everything. Choosing the projects that I can believe in, involving people who I can’t wait to spend time with, to play, to try to get it right. That is the ultimate luxury. To be given an award like this for something that already makes me so deeply happy and fulfilled is truly an embarrassment of riches.”