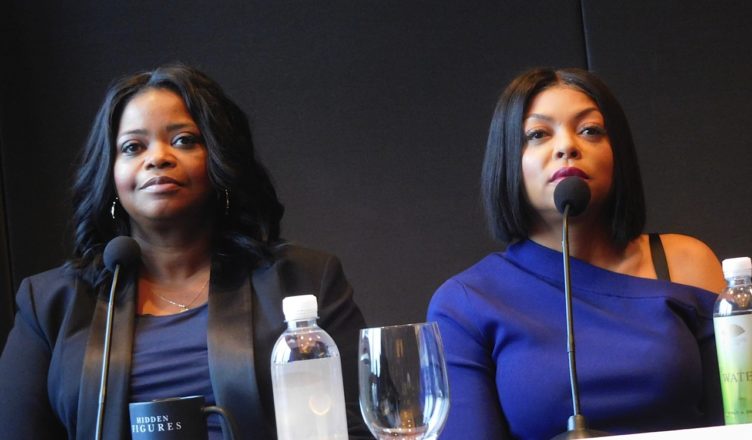 Hidden Figures is about a trio of up-to-now unheralded African-American female mathematicians employed at NASA in the early days of the space program, couldn’t be timelier. Finally acknowledged are how these geniuses working under the onerous conditions of segregation and the bias against women and their ability to excel in science, helped the U.S. win the space race against Russia.

Hidden Figures is also winning big at the box office, where it is number one for the second week in a row. Hidden Figures has earned nearly $55 million since opening wide January 6 and helps to dispel the myth that audiences are not interested in films that tell the stories of women.

This crowd pleaser stars Janelle Monáe as Mary Jackson, who aspires to be the first female engineer at NASA; Taraji P. Henson as scientist Katherine Johnson, whose math skills helped John Glenn orbit the earth, and Octavia Spencer as Dorothy Vaughan, manager of the office pool of black female mathematicians who led the way in learning the new IBM mainframe.

“Check and make sure the bright light is on me!” Taraji joked, before responding to a question about how she tackled her role.

“When you’re portraying a person that’s very real, and in my case Katherine was still alive – she’s 98 years old – there’s a responsibility to get it right. As soon as I signed onto the project I asked immediately when I got the script, ‘Is she still alive?’” She was then 97. “I have to meet her immediately!” was the actress’s reaction. She received a warm greeting from the mathematician’s four daughters who told her how happy they were Henson would be playing their mother and grandmother. “I was like, no pressure!”

Hansen noted that being in Katherine’s presence and sitting with her felt like meeting the Queen. “It was like, ‘Wow! I’m in the presence of a real life superhero.’” The most memorable thing she took away from their meeting was Johnson’s humility. “And when you talk about superheroes, they’re selfless. They don’t think about themselves. They put humanity before them.”

Asked questions about what it was like being a black woman in the 60’s, not only in an all-white male environment but also being a woman, Katherine’s response was matter of fact. “’That was the way it was. I just did my job.’ She was so humble. She would always say, ‘we.’” The actress said that also shared a similar passion about their work. “The way I light up when I get asked questions about acting is the way her eyes dance when she talks about math.”

The actress added that no one ever told her when she was a child that she couldn’t do math because she was a girl, “but there was an understanding” that girls didn’t know how to do math. “Someone lied to me because this woman exists, so that I made it my mission to do this film because I didn’t want another girl growing up believing the lie that math” is just for boys.

Octavia Spencer said finding her way into her role was a very different process because she plays a woman who is no longer alive, but “ her family and her legacy remains.” Spencer, who has an Oscar for “The Help,” mentioned that when she received the script there was only 3 ½ weeks before shooting and at a minimum she likes six weeks to prepare. “I began panicking.” She tried to get as much information as she could on the three women but there wasn’t much online. Spencer said, “It is important to learn all that you can and then throw it away so that you’re not in any way doing some sort of mimicry, but what was wonderful was that Ted (Melfi) gave us a lot of archival footage form NASA,” including manuscripts and research material. “This is the first time that these women are introduced to the world in this way and there are enough negative images of black women out there. I did not want to portray her in any stereotype. I wanted to make sure that her integrity was preserved.”

On another note, Hanson spoke about how disliked questions about diversity because they generally only meant “black and white.” She added, “We think so small. When I get that question I don’t sit and go, ‘They don’t pay me and there’s not enough roles.’ That’s not my story. I own six properties. Hollywood has been damned good to me.”

Hanson added, “Now you can ask me, have they not paid me what I have deserved? That’s the question. But they need to go to the studios. I don’t know. I do the work. Talk to the studios. Why are you asking me? I don’t write the checks. But it (the film) gave me a new sense of stop complaining about the issues. Listen, life is spiritual warfare. If you don’t know that you’re doomed. We’re never going to be equal right? It’s always going to be love versus hate. This one is constantly chasing the moon. We struggle with that as humans within ourselves every day. As a society we’re going to struggle. So you’ve got to choose when you wake up, what side am I on today or for the rest of this life? Then do the work and hopefully you legacy is changing things. That’s all we can do as humans.”

As Octavia Spencer was leaving the press conference, I asked her about the chemistry between the three actresses and how they bonded. “In the rehearsal process we got to know each other really well, and Taraji cooked for us and we did hang out. It’s also easy to love her as you see.”