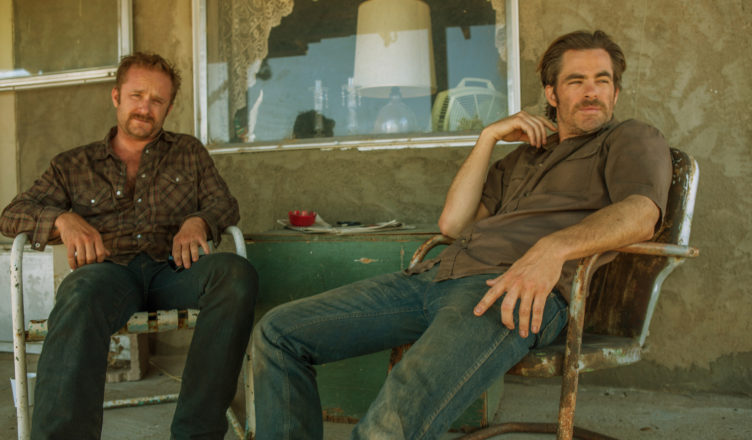 Synopsis: The Howard brothers turn to robbing banks in order to save their family estate.

If you’re all about modern westerns and have an affinity for Texas, by all means go see this movie, as it’s definitely for you. I on the other hand want to part of ever visiting Texas after this movie. What you see is what you get. Tanner (Ben Foster) and Toby (Chris Pine) Howard are brothers living bleak lives in West Texas. In order to save their family farm, they turn to banking–as in robbers. Jeff Bridges plays a Texas Ranger Marcus Hamilton (not of the baseball variety kinda Ranger), although the thought of Bridges or this character sitting in dugout seems kinda intriguing. The good ol’ boys are pretty much robbing banks and on the run from the rangers.

This film is Texas to the core. Watching it feels as if you were in a whole other world (which is kinda true). It’s rural Texas in every way you can imagine. From the ancient feel and look of the towns and people, to the rundown local diners they hang out and eat at. It’s not a pleasant looking place, but you certainly get a sense of a community and small town feel. It’s simple and bland. I appreciated that it stayed true to the tone of it by having little use of technology. It’s a plain, authentic western. The only thing that isn’t classic is that the story takes place in modern times.

Instead of taking a straight and narrow plot concept of banks robbers versus the authority, the film delves into deeper messages and commentaries. It’s a mini rural version of The Big Short. The commentary centers around the local small banking business and how it strips locals of their family possessions. Yes, it’s still a heist movie at its core, but the lines between good and bad are blurred. Even though on the surface they are supposed to be bad guys, but you kinda want to root for the Howard brothers, amid all the chaos they are creating.

The performances are the shining part of the movie. Ben Foster plays his usual character, the charming fringe lunatic, but he does it so well. There is a reason why Foster is a top-notch actor, he has all the chops to delve in deep into his characters, which he does in this film. Chris Pine is the shining star of this film. It is one of his best performances ever. Coming off a run of blockbuster films, playing characters with little depth (Star Trek aside, he’s good in that), he delivers a heck of a convincing performance. He plays a very subtle, quiet and calculated guy that’s intimidating due to introverted and matter-of-fact nature. Great work and showing of range by Pine. Jeff Bridges, okay, more on him later.

The authenticity of the brutality in the film is magnified due to the lack of focus on it. What I mean by that is that you see some gross (splattered brains) and the sheer violence. One scene stands out in particular where Pine’s character attacks and beats the piss out of a hooligan. It was so swift and impactful that it left speechless. Just a pure ass kicking, one unsuspected and unassuming take. Brilliantly gritty.

This movie was just too Texan for me. It’s pure Texas, and that’s not very appealing unless you’re from those parts.  Too much country slang. The surroundings bored me due to it’s empty nature. The film moves at a pretty slow pace, considering it’s a heist film, shouldn’t it be moving quicker?

I despised Jeff Bridge’s character. Absolutely hated him and wanted him to be the first to go. His twang and mumbling was just painful to endure. His wise cracking humor was overdone. Just can’t imagine being stranded with this annoying cowboy hat wearing hick Texas Ranger. Credit Bridges for the portrayal, must have been spot-on. Can’t imagine some of them being any different. There is no way you can have a rooting interest, much less interest in a character that plain and offensive (his bad and unfunny racial stereotypical jokes).

The climax was pretty predictable, nothing that hasn’t been done before in films of this genre. If you follow the set-up throughout the movie you won’t be surprised with the end result, fairly formulaic. There was an opportunity for more surprises and turns, but the movie stayed plain and flat just like the region the story takes place in.

Hell or High Water is a pretty niche film. If you’re a fan of western’s heist movies, you’ll definitely like it. The acting is very good, but the plot is not spectacular or exciting, event though it touches on multiple commentary subjects. Chris Pine delivers a fine performance, and I dare you to like Jeff Bridges character. The movie has high and low points, some entertaining, others not. Ultimately, Hell or High Water isn’t as daring and exciting as the title suggests.