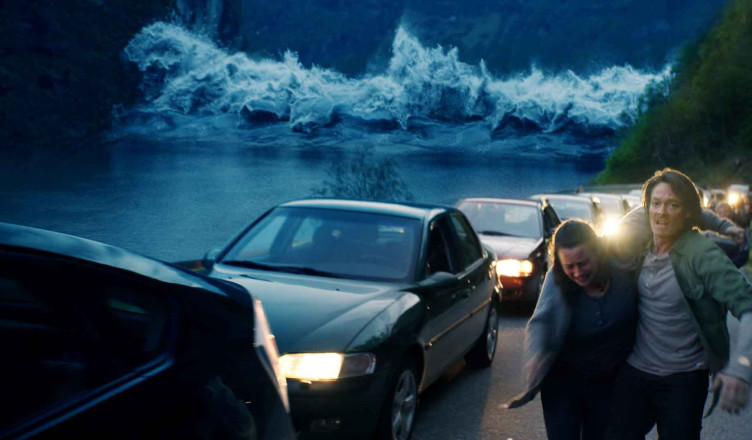 Nestled in Norway’s Sunnmøre region, Geiranger is one of the most spectacular tourist draws on the planet. With the mountain Åkerneset overlooking the village — and constantly threatening to collapse into the fjord — it is also a place where cataclysm could strike at any moment. After putting in several years at Geiranger’s warning centre, geologist Kristian (Kristoffer Joner) is moving on to a prestigious gig with an oil company. But the very day he’s about to drive his family to their new life in the city, Kristian senses something isn’t right. The substrata are shifting. No one wants to believe that this could be the big one, especially with tourist season at its peak, but when that mountain begins to crumble, every soul in Geiranger has ten minutes to get to high ground before a tsunami hits, consuming everything in its path.

“The Wave” is a made in Norway disaster flick.  The flick is not a disaster.  The crushing tidal wave created in a previously placid fjord from catastrophic mountain rock shifts sure as hell is, however.

To me these Norwegian characters seem to project more genuine gravitas and less over-the-top hysterical histrionics than we are routinely subject to in your standard issue American disaster epic fare.  These people don’t come across like actors, but rather more like…well…people.

This is spectacular filmmaking on a glorious yet fittingly gruesome scale, thanks to the remarkably vivid vision of  Director Roar Uthaug (“Cold Prey”).  The stirring cinematography contributed by John Christian Rosenlund is first-rate, realistic and riveting.  And while the scenes of apocalyptic aftermath are admittedly kind of momentum neutralizers for a time, they nonetheless are effective in depicting a community awash both in suffering and in mourning.

The movie concludes with the resolution of a man’s doggedly determined and frantic search for his semi-submerged wife and child.  While I won’t reveal the outcome, I will say that, as a parent, the gripping scene between father and son resonated on a very personal level as completely authentic and deeply effecting.

The driving thrust of this project ultimately manifests in disrupting a staunch national position of whistling in the dark while wishing away any potential calamity.  In the wake of such tragic devastation wrought by “The Wave”, one would reasonably believe that such decidedly dangerous doctrine is now drowned for good.  But is it?

I am of direct Norwegian lineage, my own dad being native-born.  Beware and be vigilant, all ye good people of the “old country”.

Next time, it may not be merely a movie.