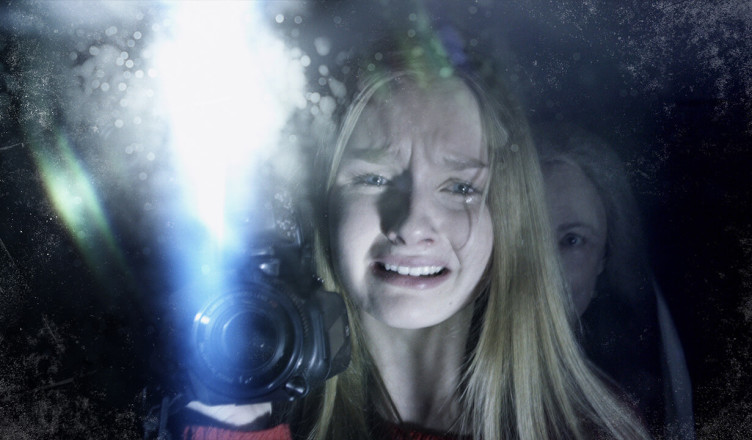 A single mother finds that things in her family’s life go very wrong after her two young children visit their estranged grandparents.

Grandma’s demented and Grandpa’s incontinent in M. Night Shyamalan’s The Visit. A mother’s (Kathryn Hahn) estranged parents get in touch after twenty years, insisting on having their grandchildren over for a weeklong visit. Already, I feel for these kids. At a shade over six-feet tall, my grandma was an imposing woman. My brother and I visited her once for a weekend without our parents, and it didn’t go well. But I never saw her naked, nor did I have to worry about her baking us alive in her oven. Can’t say the same for the teenaged siblings in The Visit. Seeing The Visit made me realize how much I miss my grandparents, and how much more I respect them for not trying to kill me when I spent time with them. RIP grandma, and grandpa, and Yiya, and Papu, too. Disclaimer: The Visit does not accurately portray the elderly, or grandparents, including long lost ones. Tyler (Ex Oxenbould) and Becca (Olivia DeLonge), the two grandkids, run into problems early and often during their visit. Nana (Deanna Dunagan) crawls around the house naked at night and scratches at the doors. Pop Pop (Peter McRobbie) keeps a collection of used diapers in his shed. Bedtime is 9:30pm and in this case it’s not nearly early enough. Pop Pop swears Nana suffers from sundowning, a symptom of Alzheimer’s that worsens at night. Nana says Pop Pop’s pooping problem is the shameful secret of a proud retired coalminer. Their connection to an ominous hospital—Maple Shade—where they volunteer, and from which strange visitors keep popping by, spells trouble. If only mom was around to help figure this out. But she’s on a cruise with a hairy chested new boyfriend, and her Skype communications are all there is to quell any worries. Everything is fine. No one is crazy. Just have another of Nana’s crazygood cheddar biscuits.

Becca is filming their visit, making a documentary of this momentous occasion, digging deeply into her mom’s sordid family history to mine it for cinematic glory. But she can’t keep her damn hands steady. The purposefully jittery camerawork is like found footage in the making. It’s nauseating. Ross McElwee she ain’t. Tyler is a little shit. He’s a white boy who raps—how droll—who makes cute decisions like replacing curse words with the names of female pop singers. This bit wasn’t funny in 40 Year-Old Virgin, and here it is less so. But this is the small stuff. Ain’t gonna sweat it. Where Shyamalan really goes off the deep end is with all the touchy-feely-pseudo-poignant-therapeutic crap. Becca and Tyler work on their absent-daddy issues, and Becca confronts her grandparents in some oddball interviews to try and figure out what happened between them and her mom that drove the wedge between them. This stuff is out of place. It’s unnecessary filler. There’s plenty of material in Nana and Pop Pop’s arsenal of nutsy behavior. All it does is bring up a bunch of questions I didn’t want to ask, but felt compelled to. Like why are the kids made so intelligent? Is it so their immense self-awareness and maturity comes off as natural? They are able to rationalize every strange occurrence. They care way too much about their mom’s happiness to say anything. The little bastards are just too well-adjusted. They are teenagers—the most selfish form of the human being—can’t they just be disruptive and whiny in this situation? I mean, uhm, Nana and Pop Pop are insane. Isn’t that the most pressing issue? Mom is no prize herself. Kathryn Hahn plays Mom, and she is really funny. I laughed at her even when I don’t think I was supposed to. But you know what isn’t funny? Negligent parenting. She leaves her kids with two people she hasn’t talked to in twenty years. I don’t think Mother Nature would approve, and she’s God’s mom.

Plot holes aside, The Visit is still really entertaining. There’s a twist at the end, as is expected in a Shyamalan picture. It’s a good one, but everything that happens after it is far more violent, creepy, and gross than anything preceding it. There’s ample edginess in the finish, a little “F. U.” in its tone. I wonder if it’s in response to the poor reputation Shyamalan has had ever since his two previous films, 2010’s The Last Airbender and 2013’s After Earth, bombed. I didn’t see either film, but not because of poor word of mouth. The Last Airbender is based on a Nickelodeon cartoon. Enough said. As for After Earth: simply utter “Jaden Smith” and voila, my interest disappears. The Visit is a return to the silly, scary, creative pictures of Shyamalan’s past. And I couldn’t be happier. Well, I could be happier—much happier…Just see the movie.