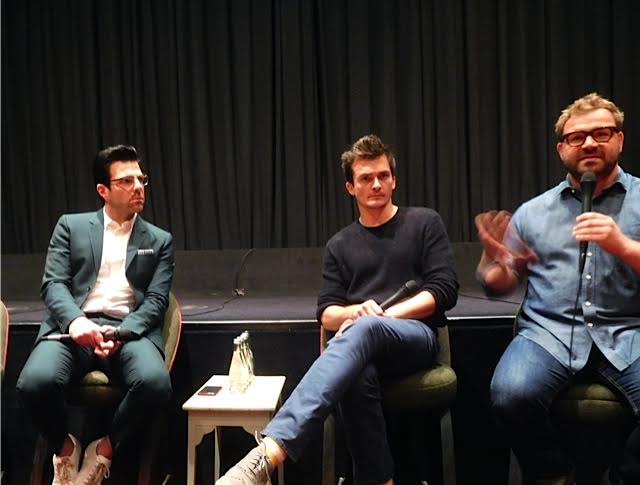 “Hitman: Agent 47,” based on the popular video game, centers on an elite assassin, played by Rupert Friend (“Homeland), engineered to be the perfect killing machine. He’s emotionless, consistent, deadly. He’s known by the two digits on the barcode tattooed on the back of his neck, which means he’s a prototype and numbers higher than this presumably mean more advanced versions.

Agent 47 is in a life-and-death struggle with John Smith, an enigmatic and powerful rival (Quinto), who works for a mega-corporation that plans to create an army of these killers, except make them more advanced, stronger, faster, and more intelligent. Hannah Ware (“Boss”) plays Katia, a young woman who is trying to unravel a past she can’t remember – although she has flashbacks – and searches for her father (Ciaran Hinds) who is a scientist who may be responsible for creating these armies of killers. Quinto and Smith are looking for both of them but whether to protect or kill them is left to us to figure out. How much you buy all this may depend on how much you’re into the video game.

The trio of lead actors, along with the first-time feature film director, Aleksander Bach, turned up at the Crosby Street Hotel recently to promote “Hitman: Agent 47.” Following are highlights from the press conference: To all of you, what was the most challenging part of your role?

Zachary Quinto: The stamina, the action, keeping everything at the level that it needs to be at in order to stay engaged with one another was a challenge that we were all happy to meet. It was good fun to work with these two.

Hannah Ware: It was a very physical role for all of us. That was fun and strained us on the physical aspect. And the human component is what really brings the film to life and makes it not just a crossover from it being based on a video game, it has some really well written characters…. It’s extremely well written, and we have some multi-faceted characters.

What were the challenges of translating a video game into a film?

Aleksander Bach: I think to make this successful, if you do game adaptation, what you need first of all – it doesn’t matter if it’s a video game or not – you need a great story, and you need great characters, and you need great actors to bring it to life. When you have this and you combine it with great action and something which feels fresh, then you have a chance to put the puzzle together in a very nice way and that you create something which feels right.

I think that’s the most important thing that you have great characters that you care for. When it’s based on this game, on Hitman, and you have this cold assassin Agent 47, you also need to care for this guy. When he’s just too cold, it doesn’t work.

The men wear beautifully tailored suits. What’s it like doing a challenging physical movie like this in regular clothes? ZQ: With that stuff it’s all about taking care of yourself. We all trained a fair amount before we got to Berlin and we continued to train through production and that was a key element. Just making sure you’re on top of it and honing your skills and challenging yourself every day. With a movie like this, that becomes really important.

Did you all feel that having a woman have powers and kick ass made it stand out from these other genre films?

Hannah Ware: When you’re immersed in the story and what drew me to it was she’s not just a strong female character. I hate using that term. It’s so annoying. It shouldn’t exist. But when you’re making a movie and immersed in things you’re not thinking, ‘Are we doing anything different?’ or monitoring and gauging where it fits in terms of what’s going on in the current mode of movie making. That’s why I did it and I’m pleased that it stands out. ZQ: It’s also what Hannah brings to the role. Yeah, she kicks ass, but she’s also operating on these emotional levels, which are really complex and magnetic and for her first big studio movie it’s such an impressive feat to watch it evolve and watch the finished product.

Did you play any of the games and did it factor into preparing for the role?

ZQ: I never played the games, so for me it was about figuring out a point of entry from a creative standpoint and engaging my imagination to inhabit the character in the world. I know it’s derived from the history of the games, but that to me wasn’t the most effective way in and I know for Rupert, he can attest to this, it was different. Training was about six weeks of conditioning after I got the job but before I started shooting and once we were in Berlin it was about focusing on the fights themselves and working with the stunt team to build ourselves up to speed so we could do this together and make sure we were where we needed to be for the cameras. It was much more traditional once we were over there. Rupert did some really fun stuff and I joined him in the boxing gym for the six weeks before we went over there.

AB: I was studying the game from the very start because I knew it was my job to bring this character to life in a great way, especially when there’s such a big fan base for Agent 47. I learned from the game that the DNA is his intelligence and the way he does things. It’s not about random killing, he’s killing because he needs to make the next step. We tried to capture this to bring this to life from the very beginning, that 47 is probably smarter than all of us. When it’s about random killing it’s boring.

RF: I found the games very useful, particularly the later Absolution game. The game-makers have clearly used an actor for the character because there was a motion-capture thing I could feel. The way that the character moved was very interesting to me. There was something very graceful about him. This is a guy who takes such pride in his clothes – the iconic suit and tie. And yet, he’s able to fight very efficiently in a very inefficient kind of uniform. That deadly grace, if you like, was at the center of something very physical for me.

When I got the role, I began training with Zachary in a boxing gym with a great guy and then the Krav Maga Academy here in New York, so I was doing this very brutal, efficient, Israeli self-defense technique and trying to marry that with something a lot more balletic.

To Rupert Friend, how did he prepare and get in the head of Agent 47?

Yeah, I went on a killing spree. [Laughter] I get this question a lot – what is it about you and people who kill people for money because I seem to do it a fair bit? The answer is I don’t know. I think the world we’re lucky enough to work in is a world of wonderful make believe, and when you’re really given an opportunity to stretch your imagination, as we were with this movie, it tests what I think is the most limitless muscle we have as creative people, which is: Can you imagine it? And if the answer to that is yes, then can you do it? And that’s our challenge. All of us actors do that on a daily basis. Special effects people do it, and photographers do it. And it’s the single most fascinating element of the job for me. You can’t really literally prepare to play an assassin unless you want to be thrown in prison. There are a few things you can’t prepare for in that way other than in your mind, and in that respect, it’s a leap of imagination.

Hannah Ware on her character, Katia:

Katia is introduced as a girl who’s seemingly normal and not genetically modified, so the human component is there from the outset. For me, personally, I always want to see films where it reflects some universal feelings and themes. Which writer says you need to know you’re not alone in the world? I think people watch movies to, in some way, identify with the characters. So, if there was no human component, you would be left cold, and you wouldn’t be compelled to watch.

Rupert Friend on his character, Agent 47:

I was particularly interested by the notion that this guy, who’s been genetically engineered to be ‘perfect’ and that the flaw in that perfection might be his humanity and that his makers might consider that to be a real rogue bit of programming. Yet if you look at it from the paradigm shift from the other side, that could also be his greatest strength, the idea that this guy who’s not supposed to have feelings or vulnerabilities, hopes, dreams, any human relations might indeed have them, and they would be considered flaws by some and actually be his greatest strength. That was interesting to me because it opens up real wonderful questions about what humanity is.