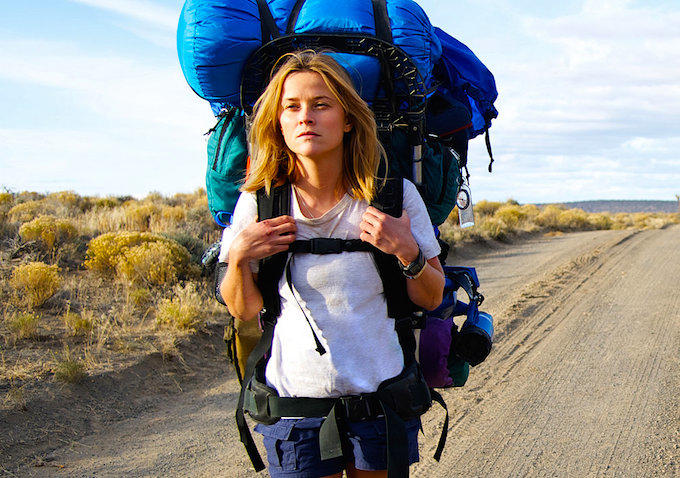 Synopsis: A woman takes a 1,100 mile hike down the PCT in order to deal with a personal issue.

Wild isn’t as wild as the title suggests. It’s rather more mundane. Based on a memoir by Cheryl Strayed, who experienced the events depicted in the movie. I could see how this was worth being made into a book, though it’s entertaining enough to turn into into a movie.

Cheryl Strayed is a unique woman, who attempted something quite impressive by hiking over a 1000 miles up the Pacific Crest Trail. It’s an impressive feat that had her endure some major rough patches physically and emotionally.

The synopsis for the movie is pretty straightforward. She hikes up the coast. Yes, the movie does a good job of presenting the reality of the situation. The need for new shoes. Bleeding toes from all the walking. Exhaustion caused by lack of water. Not to mention the emotional and psychological toll the journey took on her during her solo hike. Sheryl does a good job of garnering attention from the hikers and locals she runs into during her trek. The movie emphasizes her toughness. She holds her own with most men that she encounters. Her tough interior shines through every time she comes into contact with someone. There is a scene in the movie where she is walking alongside the road, trying to hitch a ride, when she gets the attention of a traveling journalist. He immediately attempts to peg her as a hobo, she rebuffs his attempts with a real nice flare of feisty attitude. As tough as Sheryl is portrayed to be, there are scenes that delve into her low points. Her sex romps with random men, showcase her submissive and weakened emotional state. They are surprisingly fairly explicit.

There are numerous flashbacks to Cheryl’s past. Most are memories of her mother. She’s the reason she sets out on this journey to begin with. The emphasis placed on the meaning her mother had for Cheryl is completely transparent. It’s the foundation for her story. The flashback scenes itself are at times a bit confusing and unnecessary. Her mother appears in her imagination all the time. While she’s having affairs, taking drugs, or doing everyday activities. I’d say the use of the mother constantly appearing would be unnecessary, but if that’s how Cheryl really envisioned things, I can’t necessarily disagree with her reality.

Many industry folks labeled this a Witherspoon’s best performance to date. It earned her an Oscar nomination after all. While it might be her best performance of her career, lets be honest, how many great movies did majority of her career have? Until recently she was the female Matthew McCanaughey. Queen of the cheesy romantic comedy genre. A few years back, it could be argued that former hubby Ryan Phillippe was the more successful and better actor of the two. Reese had definitely stepped up to another level when it comes to her work on-screen. Wouldn’t say it was an Oscar worthy performance, but it was physically impressive. Logging that giant backpack in every scene made me cringe. That thing looked like it weighed a thousand pounds. I’d say the physical challenges she endures in the movie, is her most impressive attribute. Witherspoon bares it all–literally. The sex scenes are fairly intense and eye-opening.

While the movie isn’t tantalizing, the Blu-ray comes packed with a lot of bonus features worth checking out. I can make a solid case as to the features being more interesting and entertaining than the movie itself. Among the features included are: The Real Cheryl Strayed, The Real Location Is The Best Location, How Much Does A Monster Weigh?, The Pacific Crest Trail Interactive Map, Deleted Scenes, Seven Promotional Featurettes,  Audio Commentary by Jean-Marc Vallee, Bruna Papandrea, and David Greenbaum, Experiencing the PCT: A Special Message From Cheryl Strayed, Theatrical Trailer, and Gallery. There is a ton of features, that will take hours to watch. It’s the best part of the Blu-ray.

Witherspoon had a lot invested in the movie. I can imagine that she does an honest job portraying Cheryl Strayed. The scenery was picturesque. Credit to Yves Belanger for the cinematography. The nature filled scenery really adds personality to the film. You get a bit of everything, desert roads, mountain ranges filled with snow, green pastures, and lakeside pathways. In addition to the wild animals she encounters on her trail. It certainly ties into the title of the movie. The drawback is that as intense as some scenes are to watch, the movie just isn’t exciting enough to keep it in your mind when it’s over.