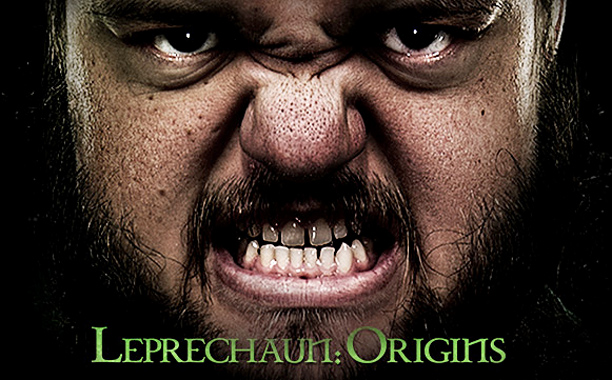 Synopsis: Two young couples backpacking through Ireland discover that one of Ireland’s most famous legends is a terrifying reality. (c) Imdb

This isn’t your parents or the Leprechaun you grew up with. In Leprechaun: Origins, a WWE Studios film currently available everywhere On Demand, Digital HD, as well as Blu-Ray and DVD, you will get a whole new take on the Leprechaun. This is the origins story of the character that’s done in the WWE way. Starring as the Leprechaun is Dylan Postl, better known to WWE fans as “Hornswoggle.”  This version is short and laughs and more on scares. Unlike the Leprechaun movies of the early 90’s that included Jennifer Aniston in her first feature film role, this version doesn’t have any connections to the original. They are two separate entities. After seeing this version, it will be obvious why.

Origins portrays itself as a regular horror movie, not a parody. It comes off as a standard run-of-the-mill horror. In those aspects it’s decent. Not horrible, not great by any means. It’s okay. It has a few minor scares, though the biggest scare might be the actual leprechaun. Postl doesn’t look anything like Lucky Charms, instead he resembles a gargoyle-mutant-alien kinda monster. Not sure what’s leprechaun about it? Only tie-in I could draw is that the film takes place in Ireland and this monster likes it’s gold. It does do it’s job of looking creepy though. In case you are still wondering..No, it doesn’t have a green little outfit!

The acting is mediocre at best. The film stars a lot of unknowns. What puzzled me is that Dylan Postl would be ideal to play leprechaun in the original version, however for this incarnation the leprechaun character seems triple Postl’s size. You can’t even tell it’s him with all the heave makeup and prosthetics. The film primarily focuses on the two young couples who travel to Ireland on a vacation. It’s not until the later parts of the movie is when we get to see the leprechaun. The story had some holes. Why did the locals hide the existence of the leprechaun? What benefit did that do to them? Why is the leprechaun so hooked on gold? Just some basic points as a viewer that should have been answered clearly in some form.

Leprechaun Origins isn’t a horrible horror film. It’s mediocre. The biggest surprise for fans of the cult classic, might be that aside from the title, this film in nothing like the original. I appreciate that it actually tries to be a horror movie and not a parody. Think the viewers might have trouble understanding why the leprechaun character looks nothing like an actual leprechaun? Why does it look like an alien gargoyle? WWE fans expecting to see Hornswoggle will be disappointed. You wouldn’t even know that he’s in the movie, unless you look at the credits. Personally I am a fan of WWE Studios, think they do some solid films. The wrestlers that star in their films are fairly decent actors. John Cena comes to mind. Seems like the WWE Studios is trying to put out more films of the horror genre. Makes sense, as they have a distribution deal with Lionsgate. The Day was a solid one that they recently produced, though it did have some recognizable faces in it. Maybe the key is to incorporate some known actors for the films to get more notice?