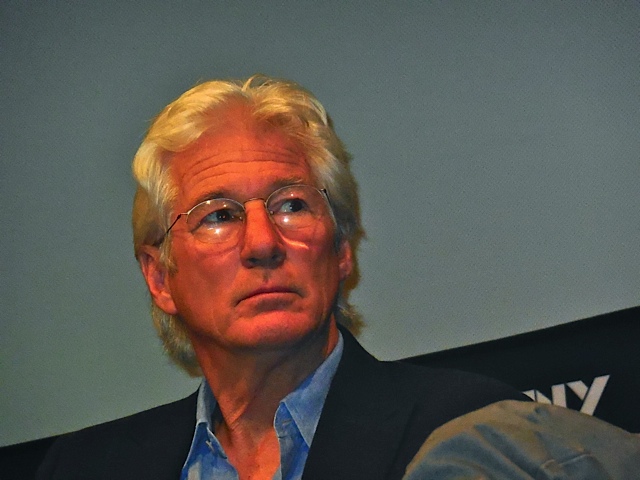 Richard Gere, in his best role in years, plays a homeless man living on the merciless streets of New York in “Time Out of Mind,” which screened at the New York Film Festival.

Gere plays George, a numbed out alcoholic brought low by booze and bad luck, who descends into invisibility and defeat. Hunched over on a park bench, a beer held tight in his fists and flashing a mindless grin, Gere radiates failure so fully you forget you are watching the iconic “American Gigolo” movie star, no small feat for an actor famous for more than four decades.

“The whole thing was predicated on that for a lot of this movie I would be on the streets and New York would be passing me by behaving as if I was who I was supposed to be,” Gere told journalists at a press conference following the NYFF screening, where he was joined with the director Oren Moverman (“The Messenger”).

The movie is personal to him. “Homelessness is a subject I’m deeply concerned with,” said the actor, who is a longtime supporter of Coalition for the Homeless in New York.

He wanted to bring the story to American consciousness the way that is familiar to him, in a movie, but although he had a script a decade ago “it wasn’t there” Gere said. “I was looking for someone like Oren Moverman to do it but I thought he’ll never do it because he’s too busy.”

They met at an Academy event and soon after that Gere gave Moverman the first draft of the piece. They found they were on the same wavelength Gere noted, adding that Moverman went to homeless shelters to flesh out the screenplay. “Oren had this incredible sense of the process of being homeless, actually the process of living and going through bureaucracy is enough plot. You don’t need to pump it up anymore. Its life itself without any dramaturgy is enough so he was picking things literally, dialogue and situational stuff directly into the movie now from his first visits to the shelters.”

As for the film’s title, Gere explained about the state of homelessness: “That’s one of the intoxicating things, mesmerizing things, about this film is it’s definitely on its own time where time kind of doesn’t become a factor anymore. You’re just there with this guy.”

Gere added, “Oren has an original bizarre sense of time on film. He doesn’t feel rushed. He doesn’t care about cutting. It’s not what he does. He just wants us to be in the movie with these people, and he doesn’t want to manipulate it in any way whatsoever. And I’m quite aware of two hours in storytelling, and he kept telling me slow down. You don’t have to rush through this.”

Gere explained how the director’s sense of time for the film played out. “I’d [the character] left my bag outside because I was drunk and they threw me out of the building, and my stuff was dumped all over the street. I played the scene, and I got my stuff. And I felt like this was going to be boring to just pick it up slowly. So, I’m rushing to get it back into my bag, and Oren said, ‘Take your time. However long it takes, it takes.’”

The film focuses on the sights and sound of the city. “It was about listening to New Yorkers. It was about watching New York. The camera doesn’t dolly or track until the very end of the movie so it was all about creating these postcards or series of photographs in which the city focuses on one person and nobody notices him. And the shocking thing about it, this someone, this nobody, is Richard Gere.”

Gere added, “I keep telling people it’s actually worse than being in prison. It’s a black hole and everyone’s afraid to be sucked into it. You’re radiating failure. No one wants to be near you.”

Gere told journalists he was concerned whether he could disappear into the role after some forty years making movies. That turned out to be less of a problem that he anticipated.

“I’m out there the first time to see if this is gonna work. And I’m still making movies! I’m still active! I was really scared actually and anxious about one as a filmmaker but personally I would be that naked out there on the streets,” he said. “No one paid any attention. No one saw me.”

Gere even had a cup in his hand and approached people for money. “Not harassing them, but just approaching them. ‘Can you help me out? Spare change? Can you help me out? Spare Change’ No eye contact, even when someone gave me a $1 bill. No eye contact. That was the first time I’ve really felt inside what that is. And for me, look, I come here and you want to hear what I have to say. You’ve seen my movie. I’m iconic in some way.”

He sighed, “I’m the same guy that was on the street and no one wanted to come near. No one wanted to hear this story so for me it was a profound experience of existentialism of how relative it all is.” His character wanted only two things, Gere noted, “a play to sleep and something to eat.”

Then there are the cameos by Kyra Sedgwick, Ben Vereen and Steve Buscemi that add texture and heft to the story.

Sedgwick plays a homeless woman carting around empty cans; she’s unrecognizable in a knit cap and bad teeth. “She wanted to play this woman,” Moverman explained. “She wanted to transform. And she went out and started to talk to people, she talked to homeless women.” She came back with a lot of notes and gave them to Moverman who incorporated them into the script. “She wanted to play that particular woman that she met and that became the role. I became excited about her enthusiasm and her ownership of that role.”

Ben Vereen had the script and just showed up in New York with a suitcase and told Moverman, “I need to make this movie and here’s why.’ He had a way of connecting with his character that was incredibly personal.”

The press conference ended with Gere musing on some of the things he learned while making the film.

“Two or three times people talked to me on the street. Once was a woman, a French tourist, who just totally thought I was a homeless. That it was true. The other two times were African Americans and they just passed me by, ‘Hey Rich! How you doin’, man?’ No questions about what I was doing there. I’d fallen on hard times. Nothing.”

“White guys were very much in our capsules. We get from here and we know where we’re going to and we see very little in between here and there. African Americans are more in the moment, they very much see the world around them for whatever reason. So that was a very interesting part of that process.”