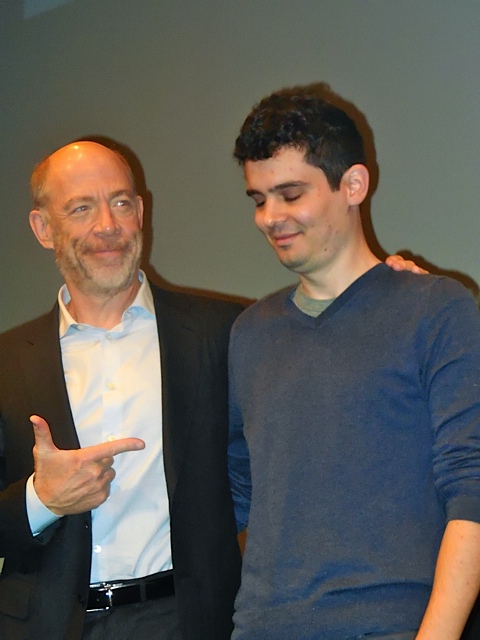 “Whiplash,” the Sundance Award-winning film by Damien Chazelle that is screening at the New York Film Festival, lives up to rave reviews. The movie is about 19 year-old jazz drummer, Andrew Neyman (Miles Teller), whose ambition to achieve perfection – to become the next Buddy Rich – spirals into obsession after a sadistic music instructor, Terence Fletcher (J.K. Simmons), transfers him into his band and subjects him to relentless and brutal mental and physical abuse to bring out his best artistic achievement. The title of the film refers to the Hank Levy jazz piece but also refers to Andrew’s psyche and the damage caused by his instructor and as well as his own self-imposed struggles. The movie, anchored by the talented and brilliant leads, is a beautiful but  terrifying duet. (The movie opens in theater Oct. 10.)

Some of the scenes are scary, especially for a movie about music. Fletcher goes Full Metal Jacket on Andrew when he is out of tempo and throws a chair at his head. A tear runs down Andrew’s eye. “Are you one of those single tear guys?” Fletcher taunts. Later he calls him “a worthless hymie f…k.” I’m sure no instructor could get away with this, but the questions the movie asks are profound: how far do you go to push someone who has an innate talent into genius? What’s the line you cross from encouragement to abuse? The film is a perfect companion piece to Ethan’s Hawke’s documentary, “Seymour: An Introduction,” about gentle music teacher Seymour Bernstein, whose process is to gently and persistently nurture talent. Fletcher, played by J.K. Simmons in perfect “Oz” mode, is not that guy.

The 29 year-old writer-director of “Whiplash” based the film on his experience as a drummer in a conservatory-style high school jazz orchestra. In the press notes he described the intensity he was going after: “The emotion I felt the most frequently was fear. Fear of missing a beat. Fear of losing tempo. Most overwhelmingly, fear of my conductor. With Whiplash, I wanted to make a movie about music that felt like a war movie, or a gangster movie where instruments replaced weapons, where words felt as violent as guns, and where the action unfolded not on a battlefield, but in a school rehearsal room, or on a concert stage.”

At the press conference Friday morning, Chazell and J.K. Simmons discussed the film with journalists and here are edited highlights:

To J.K. Simmons, if he was ever a professional musician:

“I was a college musician. I guess I was a professional musician. I got paid tens of dollars at times to play my guitar at coffeehouses when I was 16. Yeah, I have an education in classical music actually.”

The moral issue at the center of the film is do we push someone too far even if we think they’re talented? Your character is sadistic and even sabotages his career. Did you think of him as a psychopath? (Laughter)

“If I say no will you hate me? (Laughter) Yeah, I did. I did. But you also, I also, need to be able to understand what motivates someone, where something comes from. And fortunately Damien, (who was running late to the conference because of traffic) put down on paper a character that was really fully realized and I felt like all I had to was dress him up and put him on the screen.”

Further to the question of whether his character was a psychopath, did Simmons also see him that way and is he a repressed homosexual in light of his homophobic language? Also, did he draw on anyone he met in his life for his characterization?

“Yes for psychopath. Yes homophobic but not necessarily repressed. We shot most of the day, this is another Damien shout out, in 19 days. It was crazy. And this child (laughter), it’s really a remarkable achievement by him. There was a shot of me in my apartment, (where you) see my solitary existence and there actually was this really nicely ambiguous photograph of a woman and I child. As I played this whole movie they were a part of my backstory, my wife and daughter. It’s not in the film. But even in the version that we shot it was never really referred to beyond that… (My character) was not a homosexual… I certainly had some teachers who were perfectionists and coaches. There was nothing that I was consciously drawing from. As I look back on it and a couple of position coaches in football and choir director they are elements who found their way onto the screen.”

On Simmons’ concerns with working with a young, inexperienced director:

“When I met Damien and thought he was 11 years old. It was a real leap of faith to go with a technically second-time director on a film like this. I knew he was a writer. I knew he was a brilliant spirit, but I certainly had concerns about working with an adolescent. (laughter) Whether he would be able to do everything the director needs to do, but from the very beginning, including in the editing room, (he) was unerring.” The director on the movie’s journey from Sundance to the New York Film Festival:

“It’s weird. At this point, we’ve spent more time on the road with the film than we spent making it, so it’s a small kind of other life in a way… It’s all kind of gravy. I remember taking, when we took it to Sundance, we’d done a short film beforehand to raise money for the film…It was kind of a blur of a year to get the money together… The only time I had to actually kind of simmer down and reflect was the few weeks after Sundance…. And it’s a weird thing to make a movie that’s such a kind of sustained kind of aggressive burst of sleeplessness. We had a crammed schedule so that we never had time for second-guessing or overthinking things. A movie like this probably benefits from that.”

Chazelle on the two main musical pieces in the movie, “Caravan” and “Whiplash”:

“Whiplash was always the song that I hated the most cause it’s the most designed to screw with drummers in terms of how it kind of outweighs its time signature changes. And ‘Caravan’ was the song that I loved playing the most cause it’s originally was composed as sort of more of a ballad-type thing, but this is a fast, big-band arrangement that always kind of gave me the most sublime feeling as a drummer, so those two twin pieces to me were the initially starting point.” All the original music the director said was by Justin Hurwitz and Tim Simonec.

How the director’s experience as a drummer informed his editing style:

“I knew I wanted this to be a movie that would live in close-ups a lot, and so just sitting there at the drum set and remembering the things that I saw very close up with my eyes, my hands bleeding, the blisters… sticks breaking, drumheads being battered and looking almost like weird sort of Cy Twombley or Jackson Pollock paintings.”

Spoiler alert: On Andrew’s drum solo at the end of the film, does the film make the case that Fletcher’s pushing him so relentlessly is justified if it produces an artistic breakthrough?

“Since you end the movie with a moment of artistic breakthrough for Andrew you have to make everything else as horrible as possible because otherwise you’re answering the question already… J.K.’s character, if he was going to be compromised as all, it would soften it all. It would literally skew the whole movie the wrong way. You had to have something as horrible as Andrew’s solo is great, otherwise there’s not enough of an argument.”