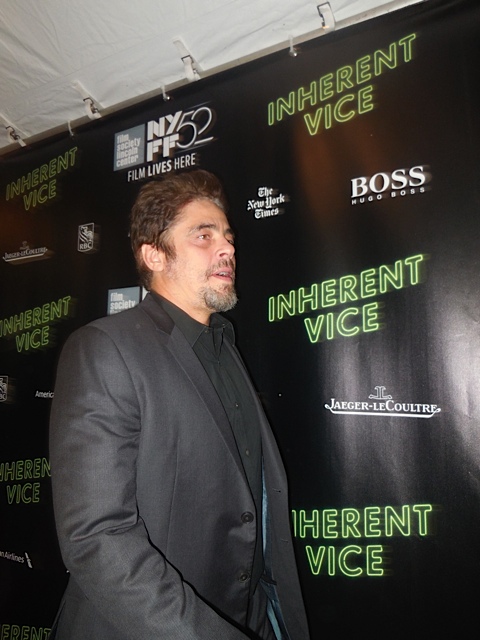 From the stage of Alice Tully Hall director Saturday night Paul Thomas Anderson pointed to the New York Film Festival logo that reads, “Film Lives Here,” and added, “It does here. My film is in 35mm cinematography.”

“Inherent Vice,” the hotly awaited film adaptation of the Thomas Pynchon novel, had its world premiere at the New York Film Festival, where it held the prestigious centerpiece slot. There were five screenings of the film and Anderson went to each of them to thank the Film Society and introduce the film to the audience, reminding them that the gorgeous cinematography by Robert Elswit (“There Will Be Blood) is in 35mm, with none of the scratches, dirt and other imperfections erased digitally.

“Inherent Vice” is set in the tail end of the psychedelic 60’s where the groovy times are about to slip away. The kooky characters in the California boho town of Gordita Beach, the imaginary locale where the movie is set, disappear and reappear during the course of some crazy goings on that would require charts to keep track of. Drugs, sex and money fuel the shenanigans. The focus of the story is on Larry “Doc” Sportello (Joaquin Phoenix), who has hefty sideburns and bushy eyebrows and a perpetually dozed, drugged out gaze. He runs his detective agency out of a dental office, where he expends more energy smoking dope than solving cases. This particular caper is set off and running when his former girlfriend, Shasta (Katherine Waterston, daughter of Sam Waterston) reenters his life to ask for his help in finding her lover, Mickey Wolfmann (Eric Roberts), whose wife and her lover may have had something to do with his disappearance. Other characters who make impressive and hilarious appearances include Jena Malone, Michael Kenneth Williams, Jefferson Mays, Jeannie Berlin, Joanna Newsom, Owen Wilson, Maya Rudolph, Martin Short and Reese Witherspoon.

Many of the actors raced by on the red carpet, including the mysterious and elusive Joaquin Phoenix. Benicio Del Toro didn’t make any stop either. The good-natured Owen Wilson smiled and stopped to chat with a few television crews. We got a quick photo.

Martin Short charmed on the red carpet. He wore a conservative grey suit. He plays a cocaine-snorting dentist, who wears a purple velvet double- breasted suit. I told Short I was disappointed not to see him in the velvet suit on the red carpet. “No, no, not today,” Short laughed. “That’s for the party afterwards.”

We talked to newbie actor Jordan Christian Hearn, who plays Denis – which is pronounced in the film to rhyme with penis – a stoner who is involved in some capers with Doc. In one scene he borrows Doc’s car and returns with only the steering wheel. I asked him what happened to the rest of the car. “I’m still trying to figure that out,” he told me.

I asked Hearn what it was like working with Anderson. “He’s such a laid back guy and such a visionary. There was never a tense moment on the set.” As for the most surprising thing about his co-star, known to be a little flaky, he told me, “That’s why you gotta love Joaquin, because he’s wacky. He’s so brilliant and fun to work with that it’s just so off the cuff. You have to embrace it.” The zaniest thing about the actor? “He walks around barefoot a lot, and he puts cigarettes out on the bottom of his feet. I couldn’t do that. I couldn’t get to that point.”

I also Williams the same question about the director. “He’s a beast. And I mean that with all compliments. His approach to filmmaking is very avant-garde, very different from what I’m used to. Television is, bang, bang bang, get the shot, couple takes, moving on, and with PTA you come into his world and his set, and he’s like, let’s discuss this, let’s figure this out. What happens is that his actors find these organic rhythms in the moment and that was foreign to me and something that I was very grateful to be a part of.”

Williams has only scene but it’s a memorable one with Joaquin Phoenix and I asked him what shooting with him was like.  “I don’t remember,” he laughed. “I was delirious. I literally came from this video set straight to that, so I hadn’t slept for over 24 hours and I was a little awestruck in being in Joaquin’s presence. Things are very blurry. I didn’t look at the clock. I lost track of time, seriously, and I just gave myself to the moment completely.”

Williams confirmed Phoenix walked around barefoot a lot and put cigarettes out with his bare feet. “I think I noticed that,” he laughed. But the thing that surprised him the most about Phoenix was how kind he was. “He’s actually a wonderful, down to earth, one of the most generous people I’ve worked with. And he has a sense of humor. There’s an innocence to him, to who he as a human being, that’s really refreshing in this world-wind that we work in.”