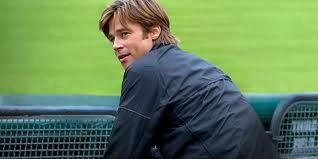 In 2011, a lot was happening in Hollywood. Harry Potter’s final installment was hitting the movie screens and critically acclaimed chick flick Bridesmaids was making ladies laugh and cry everywhere.

For Brad Pitt, however, it was his turn to follow in the footsteps of Sandra Bullock and Samuel L Jackson by starring in a sporting flick: Moneyball. The movie looked at the Oakland Athletics’ general manager Billy Beane, played by Pitt, who successfully managed to assemble a baseball team on a tight budget by using a computer generated analysis to find new players.

The film was critically acclaimed and earned a respectable 7.6 out of 10 on IMDB. But what was it about the movie that made it so popular?

Moneyball’s realism was the subject of hot debate amongst bloggers from the day of its release.  Many Hollywood movies don’t rate that highly in the reality stakes, with films that approach a topic as tricky as sports finance being known for exaggerating the truth somewhat.

Director Bennett Miller’s interpretation, however, seemed to blend an entertaining screenplay with little seen realism: the film was based upon Michael Lewis’ book, Moneyball: The Art of Winning an Unfair Game and was subsequently quite true to life. Of course, the film was based on a true story – Billy Beane really did use this system in 2002 for the Oakland Athletics. What Miller did, however, was focus the movie upon one person in true Hollywood hero style, while in reality, Beane had more than a few helping hands. The movie documented the battle between objective sabermetrics and subjective evaluation of potential. This sees Pitt encounter many tense discussions with his scouting staff as he tries to make the most of the little budget he has and the slim pickings for the prospective Oakland Athletics Major League Baseball team.

Though the battles may have been glamorized, Moneyball did fairly present the facts, from the As’ budgets to their losing streak against the New York Yankees. It also did a lot more for the real Billy Beane himself, showing today’s fans the legacy that the baseball legend has left. If he can challenge our way of thinking when it comes to acquiring players, what’s to stop us from changing our views on other sports-related finance, such as sports betting? Hollywood is known for being reluctant to not let a simple thing like facts get in the way of a good story. However, in Moneyball’s case, careful research and the addition of a multi award-winning actor were the perfect recipe for an accurate, if not a little exaggerated, sports biopic.