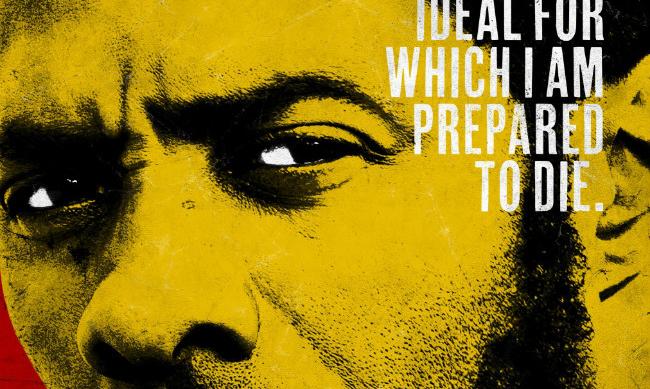 Nelson Mandela. One of the world’s greatest and most famous leaders. A man who fought for freedom, for what be believed in, through sacrifice, persistence, patience, and understanding in an unjust world. To not make a biopic on him would be a sin (so it’s a good job ones been made). Although the movie won’t be out until the end of the year, it seems an appropriate time to talk about the subject considering his recent critical and very sad state, which is omnipresent in the news.

Idris Elba is next to play magnificent Mandela in the adaptation of his biography, A Long Walk to Freedom. Now, I love Elba. He is a fantastic actor with great range. Plus, he’s a cheeky charmer. And let’s face it; he does a pretty good American accent (It can be hard for us Brits), but I’m not sure he can top Morgan Freeman on the convincing-Mandela front?

Famously, Morgan Freeman played Mandela in the 2009 movie Invictus, for which he received an Academy Award nomination. Rightly so. He gave a compelling and convincing performance as elder Mandela; obviously due to his skills as an actor, but also part of which I am sure is due to some of their personality similarities…or at least how they appear to the public. Gentle and humble, with warm experienced eyes, soft white-grey locks, and a welcoming smile, Morgan was fitting for Mandela. The only thing slightly un-perfect was his accent; he had the pace and the tone right, but I feel his drawl wasn’t heavy enough, but a great effort nonetheless. He got his rolling Rs down to a tee! Perhaps Idris Elba will smash out his accent-skills here?

There must be immense pressure playing the part of such a heroic figure as the scrutiny will always be higher in fact than fiction, but I have full faith that Elba will do the part justice. Looks, stance, and demeanor aside his sheer ability will, I’m sure shine through as Mandela.

Elba, in a recent interview for The Independent, stated, “To call the prospect of playing Nelson Mandela intimidating would be to put it lightly. But it’s a massive honor to play this saint amongst men. I was honestly confused about why they came to me. I thought, ‘you can’t be serious! You chose me out of everyone you could have gone to?’ Then I found out that Nelson Mandela was into The Wire. I thought, ‘It’s amazing – he might have kicked back and watched the Wire box set!’ The role was definitely the biggest challenge of my life. I look and sound nothing like the man – but hopefully I’ve pulled it off.”

Well, he has the humbleness down, so that’s a good start!

I will also acknowledge Terrence Howard is playing Mandela in Winnie, a film about his ex-wife Winnie, but as he’s not the main concentration of the movie, that is for another time…