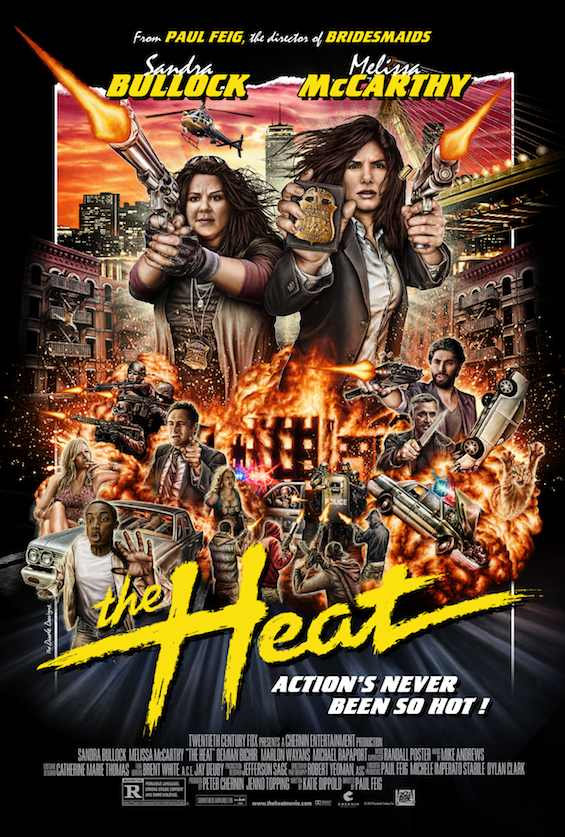 The Melissa McCarthy/Sandra Bullock starring film is not something I keep on my list of movies to watch. To be frank I’m not a fan of McCarthy’s brand of comedy nor am I interested with seeing Bullock pair herself with… anyone. This poster by the guys over at Mondo caught my eye based on it’s 80’s vibe, so I decided to share. MONDO BRINGS “THE HEAT” TO THE
ALAMO DRAFTHOUSE

Austin, TX– Monday, June 24, 2013 — Mondo is excited to unveil a collectible full size poster for The Heat from artist The Dude Designs. The explosive piece of art will be available for free at 10pm opening night showtimes of The Heat on June 27 at Alamo Drafthouse theaters across the country, while supplies last*. From director Paul Feig (Bridesmaids), The Heat stars Sandra Bullock and Melissa McCarthy.

“I am a huge fan of the work Mondo does so I was really pushing for them to do a poster for The Heat,” says Feig. “When they sent me their take I cracked up as they really nailed it.”

“Everything Paul Feig touches is amazing, so we were incredibly excited when he reached out to us and asked us if we wanted to do a poster for The Heat. After watching an early screening of it, we were sold on the movie’s hilarity and this poster is the direct result,” said Mondo Creative Director Justin Ishmael.

Commenting on the inspiration for the artwork, Tom ‘The Dude Designs’ Hodge said, “The Heat poster was an exciting design to take on. Galvanized by the awesome power of VHS cover art I set to work creating the ultimate 80s action buddy cop visual, drawing out the humor in an explosion of over the top action.”

*Posters will be available at each location and can be redeemed beginning at 8pm on Thursday, June 27 for attendees of the 10pm showtimes only. Attendees must present their 10pm showtime ticket for The Heat to redeem a poster. Purchase of a ticket does not guarantee a poster and will be given out first come, first served while supplies last.

For showtimes and tickets visit http://www.drafthouse.com

About Mondo
Mondo is an art gallery and online store devoted to a passionate love of film, art and music. The company has received global recognition for bringing art back to movie poster design and has emerged as one of the leading curators of classic and contemporary film soundtracks on vinyl. Utilizing the talents of world-class artists and designers, Mondo produces limited edition, screen printed posters based on film, television and comic properties, working with companies like DC Comics, HBO, Marvel, Paramount Pictures, Universal Studios and Walt Disney Studios as well as filmmakers including Paul Thomas Anderson, Guillermo Del Toro, Zack Synder, Quentin Tarantino and Edgar Wright. Based in Austin, TX, Mondo operates out of a permanent gallery space that hosts regular exhibitions featuring a blend of breathtaking original artwork and limited edition screen prints. Mondo is also recognized by the Academy of Motion Picture Arts & Sciences with a full archive of film posters as part of their research library. The parent company of Mondo is Alamo Drafthouse.

About Alamo Drafthouse
Alamo Drafthouse is an entertainment brand comprised of the acclaimed cinema-eatery chain, the largest genre film festival in the United States and a collectible art gallery. Named “the best theater ever” by Time Magazine, the Alamo Drafthouse Cinema has built a reputation as a movie lover’s oasis not only by combining food and drink service with the movie-going experience, but also introducing unique programming and high-profile, star studded special events. Alamo Drafthouse Founder & CEO, Tim League, created Fantastic Fest, a world renowned film festival dubbed “The Geek Telluride” by Variety. Fantastic Fest showcases eight days of offbeat cinema from independents, international filmmakers and major Hollywood studios. The Alamo Drafthouse’s collectible art gallery, Mondo, offers breathtaking, original products featuring designs from world-famous artists based on licenses for popular TV and Movie properties including Star Wars, Star Trek & Universal Monsters. The Alamo Drafthouse Cinema is expanding its brand in new and exciting ways, including the launch of Drafthouse Films, a new film distribution label and plans to extend its theaters and unique programming philosophy to additional markets across the United States. More information about Alamo Drafthouse franchise opportunities are available on the official website www.drafthouse.com.