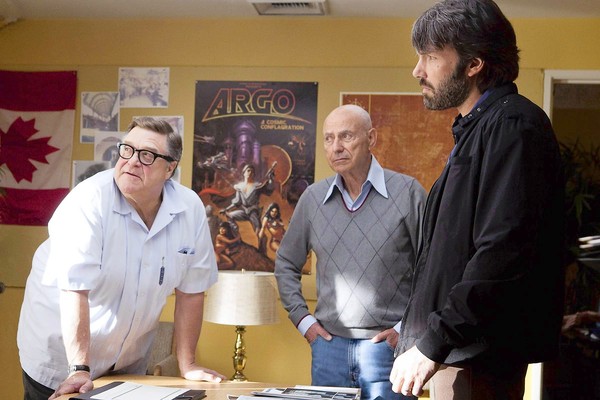 “There are only bad options…its about finding the best one.” -ARGO

Well, this is what has become of the Oscar Best Picture race. After much speculation and ups/downs of who was ahead, we go back to where we pretty much started: ARGO winning Best Picture.

What irks me about ARGO winning Best Picture is that its entertainment masquerading as history. It’s amazing how a minor historical mistake received more backlash in Lincoln for claiming Connecticut voted against for the 13th Amendment. ARGO was inaccurate on numerous levels and made up scene after scene to amp up the drama. Meanwhile ARGO‘s main character, a Latino, was played by Caucasian Ben Affleck. The climatic moment of the Iranian police chasing the plane down the runway was supposedly (and obviously) fabricated. The more I find out about how inaccurate it is, the more I disliked it. How did ARGO get ahead in the Best Picture hype? Was it because Ben Affleck didn’t receive a Best Director nomination? That helped fuel the outrage and sympathy for someone who has worked so hard in the industry and had a terrific comeback as a filmmaker. However, let me remind the viewers that this wasn’t the biggest director’s snub of the year. That would go for Katherine Bigelow for Zero Dark Thirty. And both exclusions this year is small talk compared to the true snubbing of Christopher Nolan’s masterful direction with filming Inception. The sci-fi dream adventure was nominated for 8 Academy Awards and won four of them. The backbone of Inception was Christopher Nolan behind the camera. Yet, the rage for his snub wasn’t even mentioned on 2011 compared to Affleck’s so called neglected nomination in 2013.

ARGO is not a typical Oscar pedigree movie with gravitas. Trying to position itself as the little, overlooked, under estimated movie, it’s an insurgent movie taking on establishment Hollywood made by the establishment about Hollywood. In the context of a Best Picture Oscar, ARGO is as historically cartoonish as the Iranian graphic novel Persepolis with a climax as hollow and sensational as a Jerry Brucheimer production. ARGO resorts to cheap thrills to satisfy an audience. ARGO doesn’t hold up with multiple viewings. What first WOWed me during the first viewing caused me to roll my eyes during the third viewing. The strength of ARGO has and will always be in its editing. I have said this from day one and boldly claimed it would win that Oscar. I’m proud to have gotten something correct from this turbulent Oscar season. However, I do think ARGO was the best edited feature film of 2012. The simmering tension was due to the master work of its editor William Goldenberg.

I guess I shouldn’t be surprised that narcissistic Hollywood rewarded what is a good espionage spy thriller where, surprise, Hollywood saved the day! There were too many great (and better) movies from 2012 than ARGO for it to hog all the movie awards and the eventual Best Picture Oscar (like Lincoln, Beasts of the Southern Wild, Zero Dark Thirty, Moonrise Kingdom, Silver Linings Playbook, Django, even the divisive Les Miserables). However, ARGO is the most accessible movie of 2012. No one hated it. It’s hard to do so. Affleck’s heartfelt acceptance speech reminded me why he is so liked in the industry. And his come back from a resume full of mediocre to bad movies to being an emerging talent behind the camera is inspiring to an industry that has many individuals rise and fall. Everyone loves a good movie with a great story. This benefited ARGO during the year of the dark movies.

Some movie bloggers try to offer theories to ARGO‘s victory, but I have my own; our divided country is reflected in our movie tastes. People have offered the following opinions of select Oscar Best Picture nominees: Lincoln is too boring, Silver Linings is a Rom Com, Django is too violent, Les Miserables is too bombastic, Zero Dark Thirty is pro-torture, Beasts of the Southern Wild is too weird. Yet, all of those movies are better then ARGO! No one can agree on any movie since very few people are satisfied in an era of our reactionary, culture of complaining. We live in a divided time where people cannot agree on anything from political affiliation to smart phone devices. There are groups of people who have major problems with every movie I just mentioned. Just because everyone agrees a certain movie is acceptable doesn’t make it great.

I will say if a movie by outspoken liberal Ben Affleck that glorifies Jimmy Carters foreign policy can prevent my conservative leaning friends and family from crying foul during the height of the Obama/Romney election and just enjoy the movie, this shows us how ARGO really is the consensus title of 2012! As I have said before, both ARGO and Lincoln reflect on America’s past and portrayed the United States as doing the right thing. This reassurance is needed as our nation deals with a globalized world, sagging military might, and an evolving technological based economy. With a minority of viewers complaining about how boring Lincoln was, it disqualified it for being a Best Picture contender thanks to the preferential ballot.

A recent trend I have noticed during our polarizing era when it came to Best Picture is how the Academy seems to react from how they previously voted in past years. After the win for the manly war epic Braveheart (1995), the following year’s winners included all romances such as The English Paitent (1996), Titantic (1997), and Shakespeare in Love (1998). ARGO seems to be a counter reaction to the smaller studios being victorious on Oscar night. After The Departed won (2006), indies had quite the streak with No Country for Old Men (2007), Slumdog Millionaire (2008), The Hurt Locker (2009), The Kings Speech (2010), and The Artist (2011). Even though these movies shifted tonally from lighthearted and inspiration to gritty and dark, they were outside of the major studio system. Not a single one of those movies debuted with a wide release. They all exclusively opened at a Landmark Theater in my city. ARGO is a return to big studio form that a major release film reverts to their old fashioned ways by captivating an audience with skillfully crafted entertainment. The Oscars were originally dominated by the major studios and might experience a comeback.

Between the observations of a quasi-liberal leaning film even appeasing outspoken conservatives and the sea change of quality/popular mainstream movies, ARGO became the reactionary consensus choice for our reactionary times. However let me react by declaring that film history will show that ARGO wasn’t the Best Picture of 2012. The industry had to agree on some movie. ARGO both got lucky and played the game correctly. In the context of film history, it surely isn’t Best Picture Oscar material. Not even close.

3 thoughts on “Kenny Sayz, ARGO is NOT The Best Picture of 2012, Just Most Accessible”