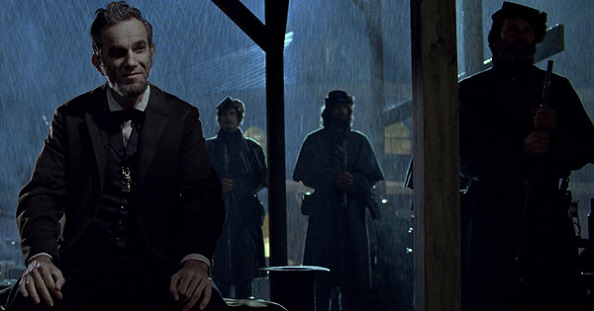 Synopsis: As the Civil War continues to rage, America’s president struggles with continuing carnage on the battlefield and as he fights with many inside his own cabinet on the decision to emancipate the slaves.

Before viewing “Lincoln” I had preemptively assumed that it would move at a slower pace than other dramas given that it also had the task of providing historical value. What I wasn’t prepared for was the continual focus on just one dimension of the film’s subject. Although the ratification of the 13th amendment was a milestone moment in Abraham Lincoln’s time as President, the consistent repetitive banter regarding the amendment becomes tiresome. The film is very dialogue intensive, so focusing on one topic of discussion for such an extended period disconnects the audience’s focus from the film. Not only is the audience’s focus hurt, the surrounding subplots suffer as well. Discussions of Lincoln’s past such as the loss of his son and his relationship with his family are briefly introduced then forgotten as the plot quickly shifts gears back to the topic of focus. A particular scene that held my interest showed Lincoln in an illusory state as he describes a dream he had. This scene seemed as though it would act as a catalyst to the unraveling of who Lincoln is, but instead loses its purpose along with other scenes as it becomes lost in the weeds.

Despite the subject of the film being a surprise, the acting was an expectant relief. Daniel Day-Lewis has always been a brilliant actor and gives another amazing performance portraying Abraham Lincoln. His appearance, the way he moves, his vocal diction, and even simple mannerisms all encompass the spirit of what President Lincoln represented. In fact, his performance is so good that he overshadows anyone else who shares screen time with him during the film. The isolated screen time that supporting cast members do have is so short lived that it is difficult for them to establish the characters they are portraying. I left the film knowing very little about the supporting cast outside of their involvement with the ratification of the 13th amendment.

The acting was brilliant and remained consistent with a well depicted, dark and ominous setting. If the character and plot development remained as consistent, this would have been a superb film. Instead, the film remained in a stagnant loop at times with redundant discussions of the same topics. Although Daniel Day-Lewis gave a masterful performance, it would have been great to see that applied to strengthening the development of his character. This film will probably receive its fair share of Oscar buzz but I feel it will be due to the formulated approach of meeting the Academy’s systematic criteria. “Lincoln” was worth a viewing but I don’t think I could sit through it a second time.

One thought on “Review: Lincoln”