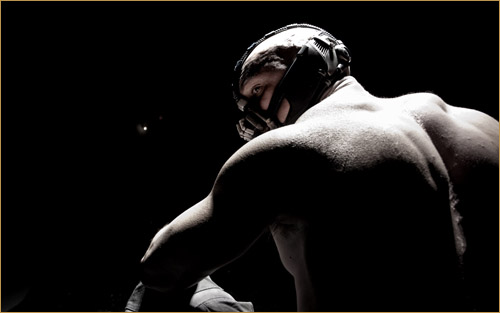 Now here’s something you don’t see everyday. I won’t even enter the debate as to whether Tom Hard’s “Bane” is able to hold a candle to Heath Ledger’s performance as the Joker. I WON’T TOUCH IT. Instead we’re going to take a neat look at the backstory of Hardy’s character in the film as well as some canned shots of the character with out his face mask apparatus and the effort and detail put into the character even without the device covering most of his face:

Said Lindy, about the scene:

[The Movie is] not out in England yet, but the other thing that you should have seen during that sequence is [Bane] being injured in his youth. So one of the fundamental things about his costume is that he has this scar from the back injury. Even if he hasn’t got the bulletproof vest on, he still has to wear the waist belt and the braces. In that scene in the prison, where he’s learning to fight the same way Batman learned to fight, he’s wearing an early version of his waist belt. It’s showing support, but it’s not the finished one he eventually wears. He’s also wearing an early version of his gas mask, all glued together.

Well, if you look at the film, unless they’ve cut it—and I’m sure they haven’t—there’s a whole early section for Tom Hardy where he’s fighting and being taunted by people. He’s got chains on him, and he’s standing on a wooden thing while people are attacking him. And in that scene, he’s wearing a much more ragged, primitive version of the mask…I suppose you have to cut things. I won’t elaborate on it too much, because it isn’t in the film, but there was another section that showed you why he had the mask and where it came from.

Via: Screen Rant and Geek Tyrant