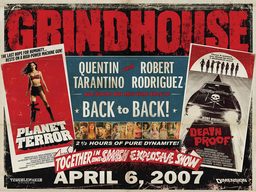 If you were a fan of last year’s ‘Grindhouse,’ you were probably upset that they had split up both films, ‘Planet Terror’ and ‘Death Proof’ in two separate DVDS. Some of you who don’t live in North America didn’t even get to see both versions together with the wonderful fake trailers Eli Roth, Edgar Wright, and Rob Zombie prepared for the intermission. (At least the ‘Planet Terror’ DVD came with the awesome ‘Machete’ trailer.)

However, one of my good friends Jay had told me about an uncut version of ‘Grindhouse’ being played on The Movie Network in Canada.

Jay of The Horror Section gives us this news:

Later on, bunkered in against the snowstorm (the latest of many this winter for the Golden Horseshoe, please make it stop!) I figured, what the hell I’ll flip it on. Of course, because Planet Terror is so awesome, I end up watching the whole thing and damned if the Zombie, Wright and Roth faux trailers didn’t come on afterwards. I was absolutely flabbergasted. There are so many things that don’t compute here.

First, why, if there is no DVD of this version, is it popping up on TMN of all places? I mean, where would they have even acquired it?

I also checked to see if this news was indeed true and, alas it was. Jay raises a great question too. If there was an uncut version, why the f*ck wasn’t it released last year?  It makes me mad that fans had to buy separate versions and some hard core fans are ready to spend a bundle on the upcoming Japanese six disc version, when all we had to do was wait for it to come on TMN. (Not even Pay Per View got this version!)

So ‘Grindhouse’ fans, I tell you to save your money and get your DVRs ready! Tune into TMN(if you live in Canada or make some Canadian friends quick) and watch ‘Grindhouse’ in its full entirety. (It’s bound to be on TMN on Demand.)