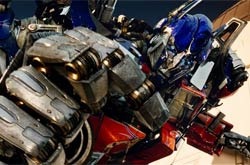 It was a wonderful Oscar show this year (still room for improvement… like GET RID OF THE STUPID SONGS), but overall it was the best show in years. Not all my picks won (I was one of the only people who picked Juno to win… it was even looking like I might end up correct on that one for a while), but I have no complaints about any of the winners really. There weren’t any “snubs” or outrages. EXCEPT ONE…

Transformers NOT winning best visual effects, and losing to the mediocre effects of The Golden Compass was one of the most mind numbing stunners I can recall in any awards show. Stupidity is alive an well in the Academy.

Now remember, we’re not asking what was a better movie. That’s not the category. The category was best visual effects. How good or bad you think the movie is (I think Transformers rocked) as a whole, the category in question was best visual effects. Much like Norbit, as bad of a movie as it was, did indeed DESERVE the Oscar nomination for best make up, because as bad as the movie was, the make up work in it was near perfection. Even most people who hated Transformers acknowledged overwhelmingly that it should win in this category. Without one single exception, everyone I know in the VFX industry unanimously agreed Transformers was the best visual effects movie of the year (as a side note many of them call it the best vfx movie of all time and most of them didn’t think Golden Compass should even have been nominated, and neither do I).

Lest you think I’m just jumping on this because I’m a fan of the Transformers movie, even though I (and most people) picked Transformers to win the sound mixing and sound editing awards as well, I have no problem that it lost to Bourne, because even though I thought the Transformers sound was better, the Bourne sound was also fantastic and I can see why it won in those categories. So no complaints from me.

But Golden Compass winning best vfx over Transformers is nothing short of outrageous, preposterous and a damn joke. In the grand scheme of things, I’d much rather see a screw job in the VFX category than the Best Picture category, but it’s still bullshit in several flavors.