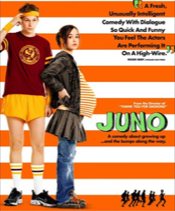 Canada rules. I love Canada and I love being a Canadian. Having said that, some of the world’s greatest stupidity comes from Canada too. Take for example the snubbing the Genies have bestowed upon Juno.

It was just proclaimed that Juno is not eligable for the Genie awards because even though Ellen Page and Michael Cera are Canadian, director Jason Reitman is Canadian, it was filmed in Canada and had pretty much all Canadian crew and cast…. the Genies have decided Juno isn’t Canadian enough.

The rules of the Genies dictate that what makes a movie “Canadian”, is where the money comes from to make it. That makes sense that to a degree, but only to a point.

Jason Reitman expresses his disbelief this way (from the good folks over at Cinematical):

Reitman says: “how are we not eligible for a Genie when David Cronenberg’s film about Russians living in London shot in England with a British crew and British cast is eligible? I’m sorry, but somebody is going to have to explain that to me; I don’t get it.” Well, I get it, but it’s a massively flawed rationale — as Etan Vlessing says: “Leave it to other awards shows to honor filmmaking excellence, whatever its origins. The Genies celebrate government support.”

This is nothing short of a giant humiliation and a black eye on the Genies. Shame on them… shame on them. As a Canadian film blogger, I’ll tell you right now I am humiliated that my own country’s awards show is pulling stupidity like this. I am ashamed of the Genies and we won’t be giving it any coverage here.