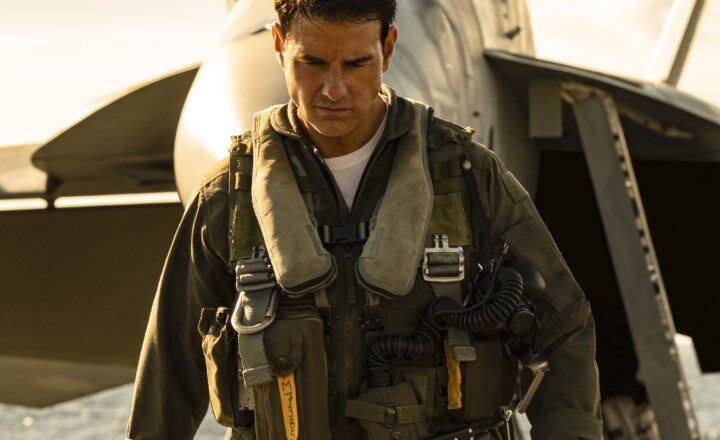 After more than thirty years of service as one of the Navy’s top aviators, Pete “Maverick” Mitchell (Tom Cruise) is where he belongs, pushing the envelope as a courageous test pilot and dodging the advancement in rank that would ground him. When he finds himself training a detachment of TOPGUN graduates for a specialized mission the likes of which no living pilot has ever seen, Maverick encounters Lt. Bradley Bradshaw (Miles Teller), call sign: “Rooster,” the son of Maverick’s late friend and Radar Intercept Officer Lt. Nick Bradshaw, aka “Goose.”

Facing an uncertain future and confronting the ghosts of his past, Maverick is drawn into a confrontation with his own deepest fears, culminating in a mission that demands the ultimate sacrifice from those who will be chosen to fly it.

Top Gun Maverick feels like the writers took great care and time to develop a story that makes logical sense. I love how Maverick feels like a natural sequel to the original Top Gun.  Tom Cruise’s Pete “Maverick” Mitchell has his work cut out for him. Pete is returning to the Top Gun school and instructing a new generation while his past is haunting him.

The Casting in Top Gun Maverick is a diverse mix of talent with Miles Teller leading the supporting cast. Miles does a great job as  Rooster and conveys a lot of the great emotional depth required as the son of Anthony Edwards’ Goose. I am also happy to see Insecure alum Jay Ellis and actress Monica Barbaro as members of Top Gun. The original Top Gun film is a reflection of the times and seeing the diverse cast for this film is refreshing. Glen Powell is another amazing addition and is liable to steal the scene. Glen Powell effortlessly portrays a callous and arrogant Hangman that you love to hate.

I love that it picks up the themes and obvious open issues from the first film. The film deals with Maverick’s trauma with Goose’s death and how his son is becoming a pilot. The movie acknowledges that time has passed but also respects the time and effect of PTSD. There are traits about Pete Michell that we see evolve throughout the film that are so fun to watch.

The cinematography in Top Gun is so good that you don’t question any of the shots or scenes. You feel like you’re in a cock pit and you feel like you’re flying in the sky as if you should always be able to see these angles and shots. this is a testament to the thought that went into the cinematography of Top Gun Maverick. I am always fond of good cinematography, especially in movies that involve aerial scenes, and this movie is exceptional in that regard. I always felt like we were watching an actual dog fight. the mission itself is thrilling but the flying is awesome.

Top Gun Maverick is formulaic in that it follows the same structure as the first film. This new movie follows the same skeletal structure as the first movie which makes it approachable but really familiar. Maverick is almost a remake of the original Top Gun with characters mirroring relationships and storylines from the original film. The Maverick and Iceman rivalry lives on in this new generation of Top Gun with new characters.