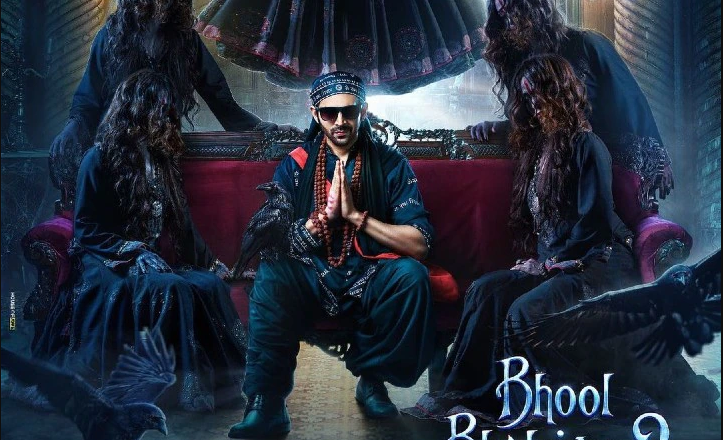 In the year 2004, a group of sorcerers traps an angry evil spirit by the name “Manjulika” inside an isolated room of the village landlord’s palace. They secured the room’s entrance with holy threads and a trident so that Manjulika’s spirit is unable to escape.

The palace in which Manjulika’s spirit was trapped was owned by the local landlord family of the Thakurs. Eighteen years later, in the year 2022, a self-proclaimed spirit seer by the name Ruhan Randhawa (Kartik Aaryan) emerged.

Introducing Kartik Aaryan In The New And Modified Version Of The Legendary “Bhool Bhulaiyaa” Title Track Of 2007!

Ruhan met the Thakur landlord family’s daughter Reet (Kiara Advani) in a bus accident where they two survived. Reet was supposed to get married to some guy whom her family had selected for her. However, she accidentally discovered that the guy was secretly having an affair with her younger sister. Reet knew that if she went back home, her family would forcefully get her married to that guy. So, she decided to play “dead” after the bus accident and took Ruhan with her to her ancestral home.

Reet’s ancestral home was the same palace where Manjulika’s spirit was trapped. When Ruhan went there with Reet, they found her entire family grief-stricken by the news of her death. The family knew about the isolated room in the palace which had Manjulika’s spirit in it but didn’t bother much about it as the sorcerers had secured the room with holy threads, and a trident. Reet, who was very much alive, hid while Ruhan went inside and introduced himself to the Thakur family as a point of contact with the spirit world.

Through a series of lucky accidental supernatural incidents, Ruhan won the trust of the local villagers and they got convinced that he possessed supernatural powers. The villagers started designating him as “Rooh Baba” which means “father of the spirit world”.

As Reet was hiding, Ruhan started convincing her family members to get her younger sister married to the guy that Reet was supposed to get married to, as now she was “dead”. However, as Ruhan stayed in the palace, he could feel the presence of an evil spirit. One night, he accompanied another household member and went up to the door of the room where Manjulika’s spirit was trapped. As he removed the trident at the door, a heavy wind started blowing inside the palace. Fearfully, he placed the trident back in its position and the wind stopped instantly.

As Reet was very much alive and hiding, unknown to her family members, one day it happened that she mistakenly hid in that isolated room where Manjulika’s spirit was trapped. This ultimately led to Manjulika’s release and the spirit started spreading horror and creating havoc in the household. However, Reet’s family had no idea that the disturbance in the house was being caused by Manjulika’s spirit. They thought it was Reet’s spirit who was doing all this. Now, it was up to Ruhan to save the house from Manjulika’s wrath.

Bhool Bhulaiyaa 2 is a new and improved version of its prequel. Its prequel Bhool Bhulaiyaa was not an actual horror film. Rather it was a story about a schizophrenia patient (played by Vidya Balan) who seemed possessed. She was cured by the combined efforts of psychiatrists and priests. But this sequel, Bhool Bhulaiyaa 2, is an actual ghost story that involves comedy, thrilling and horrifying elements to make it a complete spiced-up entertainment package. The best thing about this film is the thrill and horror that builds up as the story proceeds, and the plot takes a diversion from its initial comical essence.

The story of Bhool Bhulaiyaa 2 by Aakash Kaushik is complex with twists and turns involved in several instances. As the story proceeds, we get to know that there were actually two twin sisters, Anjulika and Manjulika (both played by Tabu). Anjulika was killed by Manjulika, and it was actually Anjulika’s spirit that was haunting the palace while Manjulika used to reside as a family member at the palace disguised as her dead twin sister. Later on, with the help of Ruhan, Anjulika’s spirit sought her vengeance on Manjulika. This drastic twist in the storyline of Bhool Bhulaiyaa 2 made it compelling.

The screenplay of Bhool Bhulaiyaa 2 has been beautifully written by Aakash Kaushik. Every scene has been placed sequentially which makes it easy for the audiences to grasp and understand the concept of the movie. You won’t come across any slow patches or questionable instances throughout the run duration. The scene and character developments in the movie occur logically.

Bhool Bhuliyaa 2 has some amazing and super dialogues which you will surely enjoy. An astonishing fact about these dialogues is that they have been written by Farhad Samji, who is not a great writer. However, we mustn’t forget that this film has been directed and supervised by Anees Bazmee who is a master writer, producer, and director in Bollywood. It is a known fact that when the supervisor is a lion, the workers under him are for sure to pick up fights like a lion! With Bhool Bhulaiyaa 2, Anees Bazmee has proved himself as an all-rounder filmmaker who is capable enough to make any sort of movie, be it horror, comedy, thriller, or action!

In Bhool Bhulaiyaa Part 1, it was Akshay Kumar who rocked the show and now in this sequel, it is Kartik Aaryan! Fifteen years have passed since Bhool Bhulaiyaa was released and its sequel has finally come out. After watching the movie, I can tell that Kartik Aaryan is the next “player” in Bollywood after Akshay Kumar! Dressed in black traditional Indian wear with a matching headgear, Kartik Aaryan did appear to be some kind of mystic in this movie. 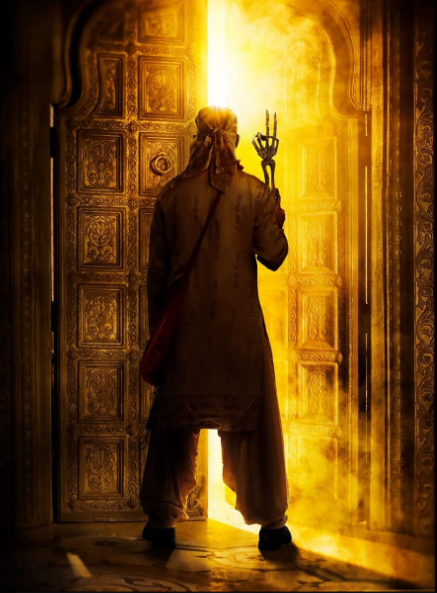 Kartik Aaryan is no star kid. Being an outsider in Bollywood, just like Akshay Kumar was once upon a time, he has created a huge impact among the audiences with master blaster movies like Dhamaka and now, Bhool Bhulaiyaa 2. He has left no stones unturned in keeping the audiences entertained through his movies. His charm, looks, body language, captivating performance, and amazing dialogue delivery in movies have enhanced his fan following. Don’t forget to check out his swaying dance moves in Bhool Bhulaiyaa 2’s title track.

Tabu in her double role and Kiara Advani as Reet Thakur gave intriguing performances. Kiara Advani has carried out her character beautifully, and she did have a major role as Reet Thakur in this movie. Tabu in her role as the evil spirit and Reet’s sister-in-law, towered over everyone in terms of screen presence. Rajpal Yadav as the comical priest Chhote Pandit was hilarious to watch. I must say, the performances of the lead cast in Bhool Bhulaiyaa 2 were truly astounding.

The cinematography and special effects in Bhool Bhuliayaa 2 by Manu Anand were captivating. The ghost sequences involving Manjulika’s evil spirit, and the VFX special effects which created a dark horrifying atmosphere in certain instances were one of a kind. The sets and locations involving a mysterious palace in a remote Rajasthani village further amplified the camerawork and made the viewing experience awesome. 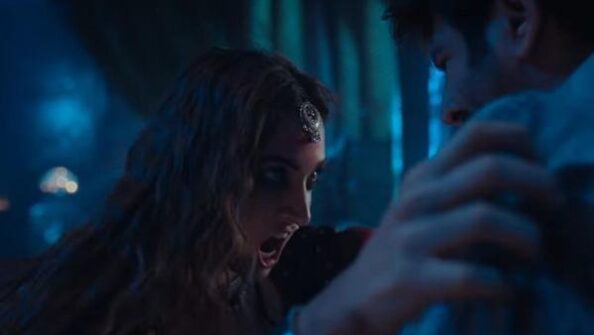 The Concept Of Bhool Bhulaiyaa 2 Might Be Interesting, But It has been Copied!

The climax of Bhool Bhualiyaa 2 will take you back to the spirit of Manjulika’s origin and past. It was revealed that there were two twin sisters where one killed the other out of jealousy and took her place. The spirit of the other twin sister haunted the place. However interesting may this appear but this same concept was shown in the 2015 Karan Singh Grover and Bipasha Basu horror movie “Alone”. So, the concept is nothing new but I must say, very well copied!

Except The Title Track, The Songs Were Not Very Appealing

The title track of Bhool Bhulaiyaa 2 was intriguing. It is a remake of the original track from the prequel. Neeraj Shridhar’s voice, and Kartik Aaryan’s style and moves rocked the track throughout! However, the remaining songs in Bhool Bhulaiyaa 2 were not as appealing. I felt they lacked melody and synchronization which in turn made them a bit cacophonous.

The splendid combination of horror and comedy has made Bhool Bhulaiyaa 2 a complete entertainment package. The movie taste of the Indian audience is different. Over here people prefer spicy films which are a combination of thrills, action, adventure, comedy, mystery, and horror. Bhool Bhulaiyaa 2 is one such hybrid genre spicy Bollywood movie which will intensify the thrill with every passing moment and keep the audiences engrossed throughout its runtime. This is one of those Bollywood movies which have a mass appeal!

The title “Bhool Bhulaiyaa 2” goes apt for this movie. Horror-comedy is a tricky genre and to live up to it, this movie created a maze of humor and spookiness which you will surely get lost in. Certain scenes in this movie are comical, yet the movie tries to retain its horror elements most of the time. However, at certain points, I felt the humor in the movie could have been more sensitive as there were repeated jokes cracked on an overweight child and a priest who was hard of hearing.

When Bhool Bhulaiyaa 2 was set to release, I thought that this would be a continuation of its prequel. But no! Bhool Bhulaiyaa 2 is a completely different story and has no relation to the prequel. In fact, this is a real ghost story that lives up to its horror-comedy genre.

The rise of Kartik Aaryan in Bollywood is very much apparent. This budding superstar has been giving a series of superhit films recently. If you would like to see Kartik Aaryan as “Rooh Baba” take on the evil spirit, don’t forget to check out Bhool Bhulaiyaa 2 at your nearest theaters! 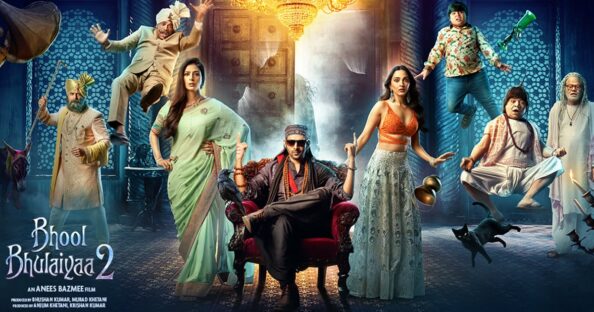