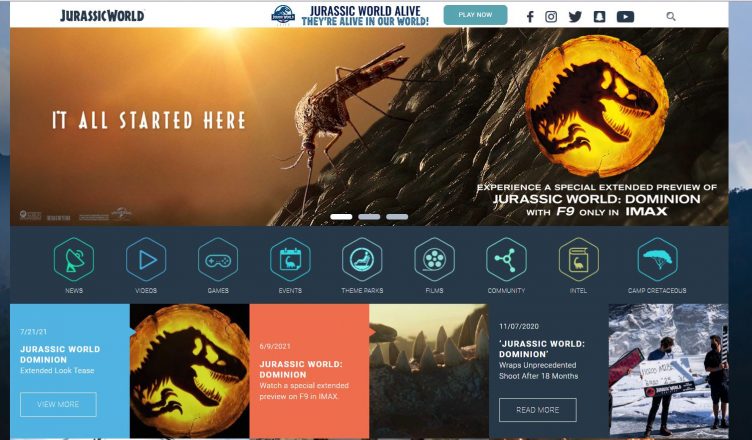 Every business has a marketing plan and everyone should remember that movies are big business. The love that you feel for the cinema and the love that you can transmit to the whole team does not feed any production. The only thing that will keep you making movies will be the box office results.

That is why throughout the history of modern cinema, numerous marketing plans have been created around films or series to attract the public to theaters or to get hooked on a television series, creating the maximum expectation and then ensuring some good numbers.

Today the Internet is essential to publicize any production but creativity goes hand in hand to make any marketing action viral. Take a look at the best marketing strategies and let me give you some tips on how to implement them in your productions:

It was clear that “Jurassic World” would be a resounding success but they still created a promotional website for the theme park as if it were real. The web is active and has even the smallest detail. The map of the park, the current temperature in Isla Nublar, and the places to find dinosaurs. The best part of this website is that each page leads you to buy a ticket to enter the park and helps you plan your trip.

“District 9” and its Alien Signage Strategy

“District 9” was quite a surprise. It didn’t have any top stars, and the director was not known at the time. Still, the movie triumphed in a big way, and that probably has a lot to do with the clever marketing campaign that the movie put together. District 9 and its argument are already striking, nothing like it had ever been done before, and that in itself attracted attention.

The fact that the aliens migrated to an unprotected and underprivileged part of South Africa made it break even more. So they created signs saying “For Humans Only” and then scattered them all over the big cities around the world. These posters soon became viral and recognizable in the “District 9” campaign, allowing the viewer to have a clear idea of ​​what the film conveys without making any clear spoilers. The campaign was a total success and tripled its budget at the box office.

“The Blair Witch Project” and its viral trailer

“The Blair Witch Project” was a milestone in the history of horror cinema not only because of its approach and way of making films, but also because they made us believe that everything was real, that they were not actors who starred in this tape and that those people had truly suffered the terror of that haunted forest. A great marketing strategy for more incredulous times.

“Chronicle” surprised the citizens of NY

The film did not have a lot of budgets and it did not have big stars, so what usually happens in these cases is that the lack of budget sharpens ingenuity. Which made the team squeeze their heads to make all the actions they performed viral. This film focuses on a group of teenagers who, when they come into contact with a mysterious substance, acquire extraordinary powers. One of these powers is being able to fly, so the marketing team behind the film decided to turn that power into reality. They made three mini-planes in the shape of a teenager and then launched them all over New York City on January 27, 2012, and it took five minutes to get attention.

Films have long been an effective promotional tool. They encourage people to buy glasses online, take vacations to secluded beaches, change their haircuts, and much more. However, they still have to be promoted with new methods!