Film is a storytelling artform, and many of the best films are simply new versions of stories or ideas that we are already familiar with.

Samurai stories existed long before modern times, but they remained unnoticed by Western culture for centuries. By that logic, the samurai film genre shouldn’t exist. It should be a niche of broader Japanese film.

But, instead, these movies built a global audience and became an influential part of film history.

Samurai films are, by definition, historical set pieces. These warriors followed strange and archaic codes—not unlike medieval knights, which helped Western audiences connect with them.

But in the silent film era, these principles were difficult to translate for foreign audiences. Titles like Roningai and Orochi became foundational pieces of Japanese cinema, but they failed to pick up much traction as Hollywood moved on to the “talkie” era of film.

When we come right to it, there’s really only one household name that is inseparably bound to this film genre and credited with attracting Western audiences to this ancient kind of tale:

Like many foreign directors, Kurosawa fell in love with certain concepts he saw in Hollywood productions. And from the visual storytelling of the silent film era to the weary heroism of cowboy Westerns, he integrated pieces from modern hits into the classic stories he knew best.

Seven Samurai (1954) is the greatest film in this genre, and it’s really not even a debate. The film received two Oscar nominations, and in 2018 it was voted as the BBC’s greatest foreign language film of all time.

Seven Samurai didn’t just catapult Kurosawa into the pantheon of industry legends. It also elevated the entirety of Japanese film, solidifying public interest in samurai films as a whole. More importantly, it helped to bridge the gap between a post-war Japan and the rest of the world.

Kurosawa didn’t just become a pioneer. He would eventually be considered one of the greatest moviemakers of all time, and samurai films played a supporting role in his success.

What Made Kurosawa’s Films So Impactful

When you look at what Seven Samurai did well, you’ll need to start a list. The themes of honor and personal sacrifice spoke to a broad audience, but they also resonated deeply in the soul of the Japanese people.

And in the years after World War II, that shared understanding marked an important moment for Japan as it worked to reintegrate with a global community. But the visual direction is where Seven Samurai really shines.

Kurosawa’s ability to capture movement became a pillar of his style. More importantly, he used background, weather, and lighting to reflect the internal workings of the characters on screen. Everything in a single shot worked together to create a palpable mood or emotion.

It’s impossible to watch a Kurosawa film without absorbing the artistic layering of movement. He mastered the art of letting multiple elements collaborate to capture a beautiful moment.

And once you know what to look for, you can see it in all of his films:

The late Sidney Lumet referred to Kurosawa as “the Beethoven of moviemaking.” Spielberg called him “the pictorial Shakespeare of our time.”

it’s time to start paying attention to how that legacy affects the wider industry.

Kurosawa’s visual storytelling helped Seven Samurai become a genre-defining epic. It was a story that tapped into themes and character arcs that appealed to viewers everywhere, and it achieved all of that while still adhering to a very traditional style.

Of course, we can’t look at Kurosawa’s influence without pointing to the technical advances. His use of telephoto lenses shaped his style. He shot each scene from multiple angles with multiple cameras, giving him more editing control without detracting from the onset action. He painted his own storyboards to make sure every shot matched his original vision. And he was notorious about pushing deadlines and budgets.

In other words, he became an auteur visionary who broke the rules in pursuit of his art.

You might enjoy Seven Samurai without ever understanding the directorial choices behind it, and that’s okay. But the performances, plot, and production techniques will still blow you away. Kurosawa’s films shaped both the samurai film genre and the rest of the world’s perception of what Japanese film could contribute to a broader culture.

How Samurai Films Influence Other Genres

Samurai films have fallen off significantly in the last 10 years. We’ve gotten a few homages, of course, but a growing trend has been incorporating samurai film principles into other genres. (Perhaps the most notable example would be The Wolverine.)

Of course, there have continued to be more traditional samurai films, like Iwane: Sword of Destiny. We’ve even gotten films that straddle the line of “traditional” and “modern,” with 13 Assassins being one more recent example.

But as a whole, the number of samurai films is dropping. And we are gradually losing the cultural impact — and the unique storytelling — that this genre gave to the film industry.

It’s difficult to pinpoint the exact reason for why this genre is becoming a lost art. What we can do, however, is point to a few likely causes. 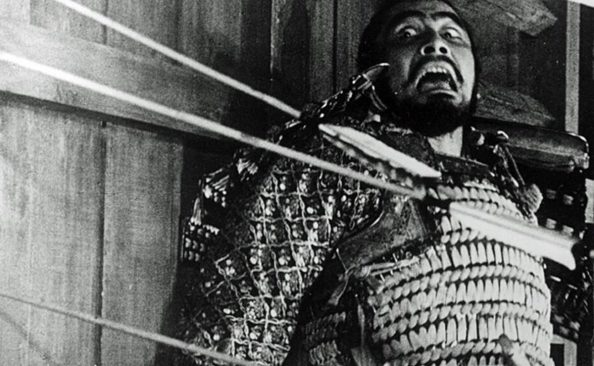 One obvious trend is the westernization of Japanese film. And as American filmmakers begin infusing similar concepts into their films, that stole some of the allure of the samurai film. (Think about The Book of Eli and other post-apocalyptic titles that featured noble antiheroes, guns-for-hire, solitary wanderers, etc.)

Another thing to consider: Audience attention spans have dropped dramatically. Not many viewers will sit down to watch a 3-hour film, and especially if those are long, slow stories like you’d see in a samurai film. Compare that to, say, The Last Samurai — similar themes and concepts to traditional samurai stories, but much of the “quiet moments” are replaced by extended fight scenes or romance plots.

The industry has evolved a lot in the past 50 years. And unfortunately, the classic elements of samurai films don’t quite fit in with modern audience‘s expectations. While directors like Takashi Miike work to keep those traditions alive in one way or another, Blade of the Immortal isn’t quite the same experience as Kurosawa’s Throne of Blood was.

But the influence of the genre can still be seen in other areas. Just look at combat shown in historical films, like the intense showdown between Achilles and Hector in Troy. Or the massive battle scenes in Peter Jackson’s The Lord of the Rings films.

Even blockbuster video games are drawing from samurai films. Sekiro: Shadows Die Twice, Nioh, and Ghost of Tsushima incorporated pieces of the action and scene-setting style of a Kurosawa film. In fact, Ghost of Tsushima is an unabashed homage to samurai films, including a dedicated “Kurosawa Mode” with a black and white style and a film grain overlay.

So while samurai films may not dominate the box office or earn Oscar nominations, it’s hard to look across the spectrum of entertainment and not see traces of Kurosawa’s legacy. Whether that’s period drama battles, intimate fight scenes, or wandering antiheroes, samurai films will continue to influence and inspire people around the world.

…just not in the same way they used to.

Drew Gula is the copywriter at Soundstripe, a company that produces filmmaking resources like royalty free epic music and storyboard templates.

One thought on “The Lost Art Of The Samurai Film”