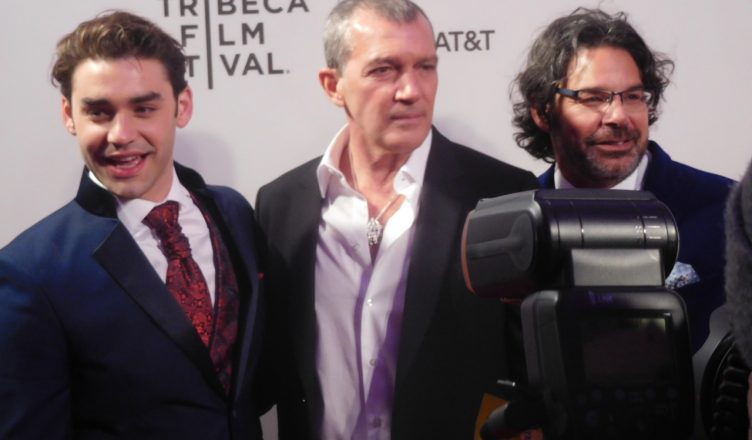 The charming Spanish actor Antonio Banderas transforms himself into Picasso in the second season of National Geographic’s anthology series “Genius: Picasso.” The premiere took place Friday night at the Tribeca Film Festival, which has expanded its television offering into a substantial part of their program.

The ten-episode series switches back and forth in time between Picasso the young man (Alex Rich) during his formative years, and Picasso the older man who was entwined in complicated relationships with lovers and wives but always most obsessed with his art and what it meant to be an artist.

Although it’s difficult to hear Banderas’s softly hypnotic voice without thinking of the animated outlaw cat Puss n Boots, he seems to have been destined to play the great Spanish artist. Like Picasso, Banderas was born in Malaga, and Picasso’s house was within view of his mother’s home.

After the screening of the first episode, Banderas came out to talk about the series with co-stars Clémence Poésy, Samantha Colley, Alex Rich, executive producers BrianGrazer and Francie Calfo and Ken Biller.

‪Antonio Banderas takes on his boldest role yet in the fascinating Genius: PICASSO. Watch LIVE as Banderas talks about the series with co-stars Clémence Poésy and Samantha Colley, executive producers @BrianGrazer and Francie Calfo, and more at #Tribeca2018.

Asked during the panel discussion about the most eye opening thing he learned about Picasso, Banderas replied, “Picasso himself, his own personality, we know very much about him, the artist, but we didn’t know so much about the person, the every day man that we were visiting during five months, his tremendous independence, his lack of justification. He never justified  anything,” said Banderas, “even with a very complicated life, a life in which he left behind some collateral damages.”

Banderas said it was profound “to discover this kind of dichotomy between the genius we know, the one that we love which is the Picasso in the museums and than there is the human being who travels with a back pack filled with greatnesses and with miseries.”

In the past Banderas turned down the chance to play the great artist, because he said, “I was really afraid of playing him. He was such a big figure for me, so complicated, but at the same time he was from my hometown.” He worried that he wouldn’t get a grip on the character. “Let’s face it, he’s a very mysterious man.” The actor said he still found Picasso mysterious even after five months of research. “I think he was mysterious to himself.”

Banderas said his fears have lessened with age. He is now 58 and last year had a heart attack. “I saw the face of death,” Banderas said. He felt ready to take on the role.

Earlier on the red carpet, Samantha Colley, who plays Picasso’s mistress Dora Maar, told me all of Picasso’s women knew about each other.  “They weren’t victims., that’s the thing that I’m quite adamant delineating,” she said.”Picasso  didn’t treat women that well but he didn’t treat men that well either,” she said. “Genius doesn’t lend itself to be a good partner in relationships, be it be platonic or romantic.”

As for her character, who she described as a modern woman, “I find that I’m portraying someone who feels in love with Picasso passionately and never regrets it. He was the greatest passion of her life but at some point she was becoming an assistant and wasn’t becoming the artist she knew she was and decided to leave and lead her own career at a time when it was quite hard for a woman to do that, so I feel like that’s an interesting story to tell right now.”