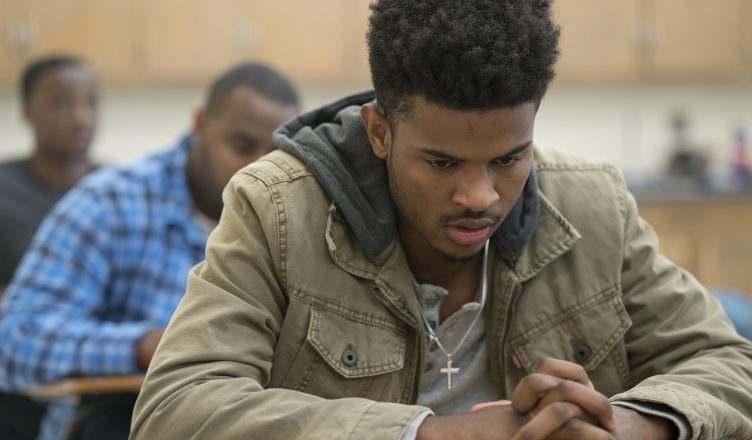 Burning Sands is a rather interesting movie that I’m sure will at the very least have people talking. The film appears to be a compilation of various tactics and instances of hazing that may occur in black fraternities on university campuses. While I am not in fraternity, I did attend a university that had black fraternities. I also gave it heavy consideration to join in my early and later years of undergrad as well. So many of the situations in the film I could at least relate to in some way, even if not directly. What I found most enjoyable about Burning Sands were the many different themes that were explored throughout the film.

In the movie, masculinity is achieved supposedly by accepting various types of abuse to prove one’s commitment. You have to accept pain to be a man. You have to demonstrate your sexual prowess and dominance over women to be considered masculine. Rarely would more positive attributes such as being responsible or caring (to your brothers) be exemplified towards being masculine.

Devotion to the Brotherhood:

Another theme was the interesting, but yet contradictory, sense of brotherhood and loyalty. There are instances in the film where the goal of brotherhood is proposed, but when it is actually practiced, the pledges are met with negative consequences. That conflict creates a bit of a cognitive dissonance and confusion (for both the pledges and probably the audience) as to what is the right or wrong thing to do in the challenges they face. The irony was such that you either went with the flow for the sake of brotherhood, or you stand up against the injustices or problems….for the sake of brotherhood. (Where’s that Nick Young meme when you need it?)

One theme that I instantly picked up on was the connection to slavery. The film alludes to the notion that many of the tactics implemented to force slaves into conformity were the very same utilized by the fraternity and their new recruits. The hazing and the abuse was very reminiscent to that of slave holders who would berate the slaves into conformity, loyalty, and obedience.

I thought it was really insightful for Burning Sands to present alternative reasons for people to join the frats. The motivations, in some way, seemed to tie back to establishing one’s identity. For some, those reasons would be popularity or simply tradition. In either case, it was rarely rooted in being identified for the causes that the fraternity itself stood for on paper.

Burning Sands is pretty straight forward in terms of the plot, but there is a nice twist at towards the end of the film, which is probably when the movie hit its climax. While others may deem it as a negative, I actually liked the way the film ended. It leaves it up to the audience to interpret, which for me, isn’t necessarily a bad thing at all. We want movies to make us feel things and generate discussions. This movie succeeded in both.

On one hand, one could make the argument that the film was bit too one sided. Burning Sands primarily focuses on the negative side of black Greek life (because it barely speaks on other racial Greek fraternities or sororities), and the hazing that occurs.

On the other hand, one could counter that by saying that this was the vision and goal of the director/writer Gerard McMurray. If McMurray’s intent was to focus on the hazing, and not to necessarily emphasize the community service and brotherhood that happens within these fraternities, then that’s his prerogative. Seeing as though Burning Sands explores uncomfortable themes that few are talking about, I think the movie is well worth the watch. It’s even more so deserving of having a constructive conversation about the many themes it touches on.