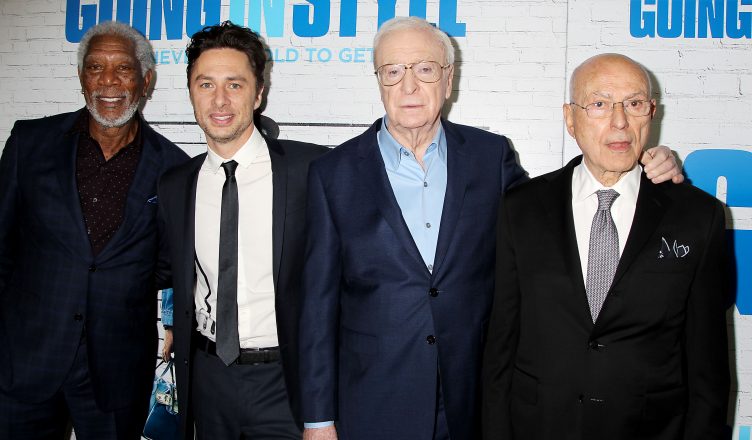 Morgan Freeman, Alan Arkin, Ann-Margret and Michael Caine have 17 Academy Award nominations and four Oscars among them. The movie legends promoted their new film, “Going in Style,” a bank heist caper, at the Whitby Hotel in midtown Manhattan.

They bantered, teased and goofed around for 30 minutes in what turned out to be more a vaudeville routine than an actual press conference to promote their film, which is written by Ted Melfi (“Hidden Figures) and directed by “Scrubs” actor Zack Braff (“Garden State”).

“Meet these fresh new faces,” cracked the moderator, as he introduced the legends, who were joined by co-John Ortiz and producer Donald De Line.

How did you get them sign on a journalist asked the producer?

“The guys read it and it’s hard not to like it because the script is smart, clever and filled with heart and some real resonance for issues that are going on today. At the same time it’s a hell of a lot of fun.”

“For those of you who write slower,” Morgan Freeman told the journalists, “He pro-mis-ed to pay us. The money was good.” (Everyone laughed.)
Ann-Margret, at 75 is the baby of the group, was asked how she liked being the only female of the group? (She plays Alan Arkin’s character’s love interest, Albert, and yes there’s sex after 70, at least in the film.)

“It’s amazing,” the actress giggled. “And I love it. I’m crazy about it,” she said.
Asked how their chemistry impressed her, Alan Arkin cracked, “It depressed her?”

“This is Albert. He’s one of my grumpy old men,” Ann-Margret said affectionately. “Yes, and it was his birthday yesterday.” (Arkin was born March 26, 1934, looks great and moves like a much younger man)

“How old are you?” Freeman asked.

“I’m a 106 years young,” cracked Arkin.
“Nevertheless Michael and I are insanely jealous,” said Freeman of the love scenes in the film between Ann-Margret and Arkin.

Ann-Margret added, “To watch these three, I see them as 17 year-old-teenagers. The film is all about friendship and being the only girl, it was fantastic. They’re making jokes and they’re teasing. I had a heck of the time, and the woman I’m portraying, she’s full of life. She knows that your life does not end at a certain age.”
Morgan Freeman asked a journalist for a pen.

“By the way, he just wrote this on here, said Caine,” pointing to his name card; Morgan Freeman had just added a “Sir” to Caine’s name. 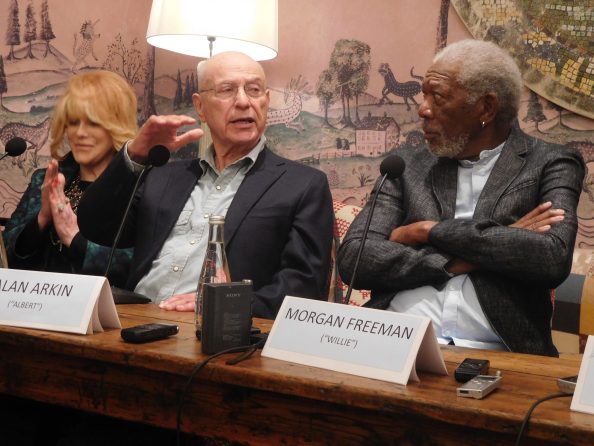 “I’m Sir Michael Caine. Thank you Morgan.”
“I must let everybody to know we’re amongst royalty,” Freeman said.

“Thank you,” Sir Michael replied.
“I’m your friend,”Freeman said. “I know you are,” replied Caine primly.

The question next was, “What would they tell their 20 year-old selves?”

“I’d make an effort not to have so many marriages,” said Christopher Lloyd. “I’m in my fifth at the moment.”

“If I was my 20-year-old self,” said Sir Michael, “my motto when I was 20,” – and he he said he was quoting Winston Churchill, “If you’re going through hell, keep going.”

“When I was 20 I was in the military,” said Freeman, “I would have told myself: ‘Your dreams are going to come through. I never had one that didn’t.’”

Alan Arkin said his advice was a version of what Morgan Freeman had just said, “Calm down. Everything’s going to be ok.”

“Are you accusing me of plagiarism?” Arkin asked.

“No, Churchill’s dead. He’s not going to say anything.”Caine deadpanned.

Ann-Margret added that when she was 17 years-old, she told herself she was going to be married only one time in. her life. “And guess what? If we make it to May 8th, it will be 50 years.” (She is married to actor-manager Roger Smith.)

John Ortiz, who up to now was pretty quiet, was asked what it was like working with legends? Did he get nervous?

“Don’t lie. You didn’t even know we were legends,” said Freeman.

“He was entirely unimpressed,” Caine added.

Alan Arkin said drolly, “You said that every morning on the set. Look out for the legends.”

What did the actors think of the original film?

“I saw it 4 years ago. I wasn’t knocked out by it particularly,” said Arkin of the 1979 film of the same title that starred Art Carney, George Burns and Lee Strasburg. “Three great actors but I didn’t think the story was very good.”

So did any of them ever think about retiring?

Caine said, “That’s not even a question.”
“Who’s going to retire?” asked Freeman.

“No, the movies retire you,” said Caine. “You don’t retire from the movies. You don’t get a script or the script’s crap or the money’s no good. Then you say I’d rather stay home and watch tv. “

Arkin added, “For the past six-seven years I open a script and I say, ‘What page do I die on?’ I make it to page 64! Not bad!… We’ve been talking, I think all three of us never had a job basically until we were in our early 30’s.”

What kept them going during the hard times finding acting gigs?

“I can think of maybe two or three things that sort of encourage you to keep you working,” said Freeman. “ One of them is that sometimes when you’re almost at the very limits of your endurance, I remember once finding a $20 bill in the middle of the street on Broadway. It’s like, oh, it’s going to be my lucky day.”

Also his friends would tell him he could’t quit. But the major motivation, “was embarrassment,” that he’d be driving a cab and someone he knew would get in “and they’d say, ‘You driving a cab?’ I was on the very verge of going to the Taxi and Limousine Service and getting a chauffeur’s license when I got a job from Paul Newman. It’s like, you just gotta keep going.”

“But you did do ‘Driving Miss Daisy,’” noted Ann-Margret.

After the press conference I asked Arkin about what was in the script that drew him to the role of Albert?

“I changed it from what was on the page. I didn’t like what the character was, who he was, so they let me reshape it and that was my favorite thing about it, before the movie started.”