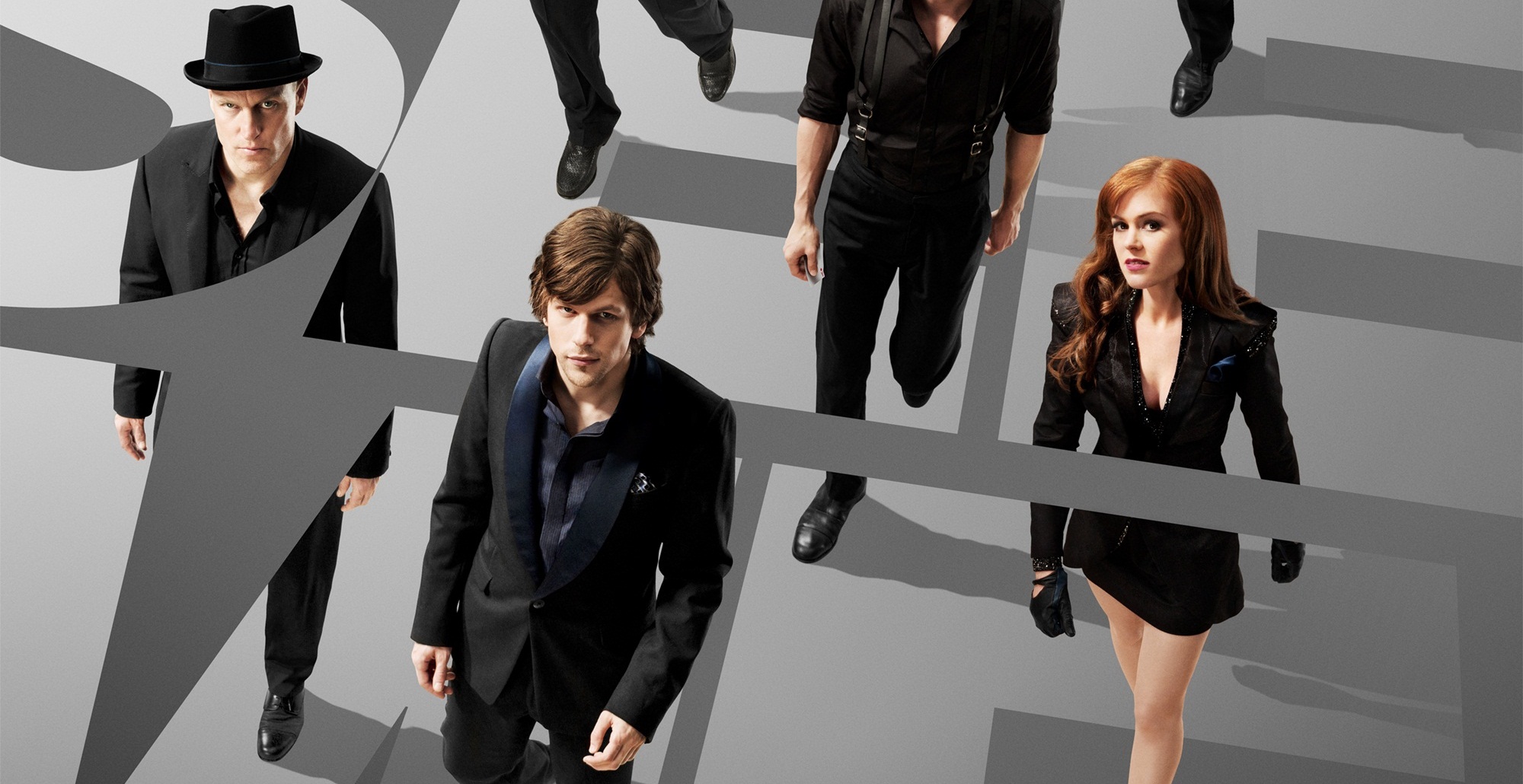 Now You See Me pits an elite FBI squad in a game of cat and mouse against “The Four Horsemen,” a super-team of the world’s greatest illusionists. “The Four Horsemen” pull off a series of daring heists against corrupt business leaders during their performances, showering the stolen profits on their audiences while staying one step ahead of the law.

Now You See Me is a caper film directed by Louis Leterrier. Leterrier’s resume includes the original Transporter (2002) film and its sequel in 2005, as well as The Incredible Hulk (2008), and Clash of the Titans (2010). The movie has quite the cast which includes Jesse Eisenberg, Mark Ruffalo, Woody Harrelson, Melanie Laurent, Isla Fisher, Dave Franco, with Michael Caine, and Morgan Freeman. The movie opens up with four magicians – Danial Atlas (Eisenberg), Henley Reeves (Fisher), Jack Wilder (Franco), and Merritt McKinney (Harrelson) – being seemingly recruited by an unknown figure. The opening sequence gives us a brief introduction to each character and it’s a fun nod (almost 2001 Ocean’s Eleven-esque), whilst adding to the mystery of what is to come.  The film then fast-forwards a full year and opens up to the magicians performing together under the group name, the Four Horsemen, which has been generously sponsored by Arthur Tressler (Michael Caine), an insurance magnate. We are then shown the Four Horsemen at the tail end of their opening act in Las Vegas, promising one hell of closing magic trick – a bank robbery. This ultimately leads to the entire audience unknowingly becoming their accomplices, as the stolen money from the bank is dispersed amongst the attendees. The act, as a crime, naturally brings the attention of the FBI and introduces us to Agent Dylan Rhodes (Mark Ruffalo) as he is teamed up with Interpol agent, Alma Vargas (Melanie Laurent) as the robbery seemingly took place in real-time in France. There is the general disbelief that magic is real and thus despite an interrogation, the Horsemen are let go not before proclaiming their next magic trick will be even better. It’s here the film present its lulls, which aren’t lulls but a technical breakdown of how their magic trick was performed. The breakdown is provided by Thaddeus Bradley (Morgan Freeman), who is an ex-magician who goes around debunking magicians while making a fortune off their misery. “It’s all about misdirection” he puts it, which also adds to another quip said earlier by Atlas “it’s about being the smartest guy in the room”.

It’d be a shame to get into the film anymore than that, because like Thaddeus, I’d be ruining the magic despite how much we want to know. The whole premise for Now You See Me is the audience as well as the cast of the film itself playing catch up. “The closer we look “as Eisenberg’s character; Atlas puts it, “the less likely we see”. But that’s the point of the film. It keeps up the active imagination and second-guessing. It wants us to play along and asks us to try to figure out. We know while the simplest recourse is straight forward and simple, the minor hints or innuendos are never to be glossed over. Thus the characters in the film itself, you really just don’t know who are the protagonists or antagonists and in reality, what exactly is the end game for all of it.

As much as the film is about magicians, the movie itself is one giant magic trick. And if you like magic, there is no reason why you won’t have fun watching Now You See Me. At its core, amidst the flurry of summer blockbusters, the film is entertaining while operating strictly on the charisma of its cast. It has a relatively modest budget ($75 million) which allows for the ‘magical’ effects to be presented lavishly on-screen. But that too is in part of the controlled magic of movie making. So it goes hand-in-hand with how we as the audience are visually wow’ed, but also with the general requirement of suspending our level of belief. Yet despite these moments, Now You See Me, is also a technical breakdown of the magic itself so the ‘wows’ of the film are described in the “hows” and “whys”. It’s enough to keep a constant pace, with despite a 115 minute runtime, actually feels shorter because of how quick or to use magician terminology ‘sleight of hand’ the film is.

If you’re looking for a genuine surprise, definitely check this movie out. Between all the heavy hitters this summer, Now You See me isn’t one you should miss.