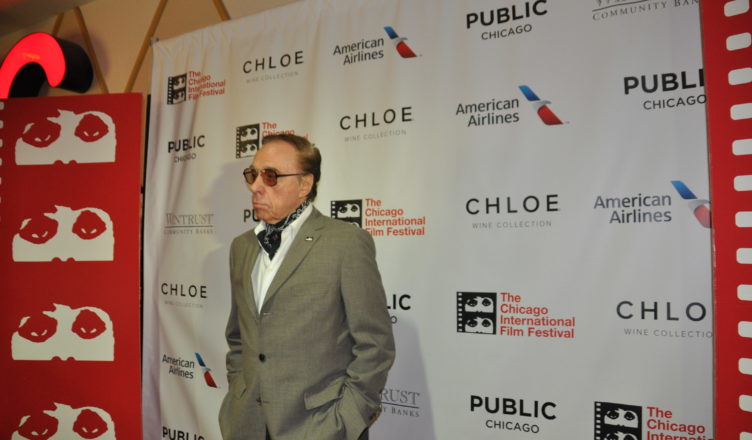 Then the audience was treated to clips from some of Bogdanovich’s greatest films (see chart at end of article) and interviews with those who know him well, like Jeff Bridges and Ben Gazzara.

When the portions of the film that focused on Dorothy’s heinous murder were reached in the documentary, Bogdanovich left the theater. About ten minutes later director Bill Teck followed, no doubt to check on him.

In the Q&A following the documentary, Michael Phillips of the Chicago “Tribune” asked a question that many might have wondered about: “How do you manage to remain friends with an astonishing number of exes?” Bogdanovich answered, “If one aspect of a relationship doesn’t work, why dump it all?”

His most lasting and well-known relationships were with wife Polly Platt, a working relationship and one that lasted from 1962 to 1971, producing two daughters, Antonia and Sashy. In 1971, while making “The Last Picture Show,” he fell in love with its star, Cybill Shepherd and left his wife. They were a couple until 1978. In 1980, while making “They All Laughed,” Bogdanovich became romantically involved with Dorothy Stratten, who was murdered in 1981. He married her younger sister Louise in 1988 when he was 49 and she was 20; they divorced in 2001.

Bogdanovich’s climb to director was not the traditional path through film school. Instead, he privately reviewed every movie he saw from 1952 to 1970 and sought out the great masters of film to interview them and write about them. A true student of the cinema, he has written extensively on all matters concerning film.

Hired as a film programmer at the Metropolitan Museum of Modern Art in New York City in the sixties, Bogdanovich organized film retrospectives of Orson Welles, John Ford and Howard Hawks. One of those film retrospectives on Alfred Hitchcock I had the good fortune to see, taking my daughter from individual table-top computer to individual table-top computer to view such classic Hitchcock film scenes as the shower scene from “Psycho” or the attack scenes from “The Birds.”

Bogdanovich would ask publicists for invitations to movie premieres and industry party invitations. Roger Corman was sitting behind him at one of these events and, after a conversation in which Corman complimented Bogdanovich on a piece he had written for Esquire magazine, Corman offered him a job directing.

Bogdanovich accepted immediately, taking on the film “Targets” that starred Boris Karloff. Bogdanovich has said of this experience (undertaken under the pseudonym Derek Thomas), “I went from getting the laundry to directing the picture in three weeks. Altogether, I worked 22 weeks—preproduction, shooting, second unit, cutting, dubbing—I haven’t learned as much since.” (Quote from “What They Learned from Roger Corman” by Beverly Gray of MovieMaker magazine, spring of 2001.) The low-budget film was a financial success.

During his remarks this night, Bogdanovich articulated his dislike of numerous, obvious cuts, a style in vogue today (think Paul Greengrass and Matt Damon’s “Bourne” movies), which he dubbed the MTV School of filmmaking. Bogdanovich’s opinion: “I don’t like that. You cut for emphasis. I believe in the intelligence of the audience, (originally an Otto Preminger quote).”

When asked about how he developed his own style, he replied, “I never thought about style. I was interested in telling the story and using the craft to make the film the most effective way possible. I saw a lot of pictures and I’d say, ‘Why is the camera there?’ I was told always cut on movement. Then they’ll never notice the cut. The MTV influence, which I despise but which is in vogue nowadays, they want you to notice the cuts.” To make his point, Bogdanovich offered up Ginger Rodgers/Fred Astaire musical numbers or Gene Kelly’s dance numbers.

Asked if he had ever considered following some other notable directors into directing for television, Bogdanovich said, “I directed an episode of The Sopranos in the 5th season. But, to do the job right, you have to be in charge.   I don’t look forward to it when you don’t know your cast, but I did know the cast of The Sopranos.” (from his role as Dr. Melfi’s psychotherapist, Dr. Elliot Kupferberg.)

Bogdanovich noted of his Sopranos time, “We couldn’t change a word of dialogue on The Sopranos without consulting the director. If you wanted to change anything, you had to call him (David Chase) up and ask him.” Given those strictures, he was told to ask Dr. Melfi (Lorraine Bracco) a question, but no question had been written for him. He improvised a question. The director said, “Ask a better question.” Laughing, Bogdanovich said he told the director that if he wanted a better question, he should write a better (expletive deleted) question for his character to ask.

Throughout the evening’s question and answer period, Bogdanovich, an avid film historian, kept repeating how much he had learned from studying other great directors. He repeated this nugget of information from an interview he did with Howard Hawkes in 1962. Hawkes told him, “It’s not about plot. The plot is people either getting together or not. Hawkes wanted to focus (in Rio Bravo) on the characters. I loved him. I learned so much from him and from Ford and Fritz Lang, Otto Preminger, Renoir, Alfred Hitchcock. I was so lucky. And they were all my friends. Well, maybe not Fritz so much.” (laughter)

Asked about his collaboration with Barbra Streisand and Ryan O’Neal in 1972, “What’s Up, Doc?” (and, especially, about Barbra’s reputation as a prima donna), Bogdanovich said that Barbra had seen an early cut of “The Last Picture Show” and wanted to work with him. He recalled mentioning to her how Barbra might read a certain line in the script (which Bogdanovich had written) and Barbra saying, “Oh, so now you’re going to give me a line reading?” Later, when Barbra was singing “As Time Goes By” in the film, he mentioned to her that she might put more emphasis on the word “can” within the lyric “on that you can rely” and Barbra retorted, “Oh…so now you’re going to give me line readings for the song lyrics?” He added, “She was fun to work with. I really loved her.”

Bogdanovich ended by quoting Jimmy Stewart, whom he interviewed for the 1971 AFI documentary “Directed by John Ford:” “If you’re good and you’re lucky enough to have a personality that comes across, a good film is like giving the audience back little pieces of time.”