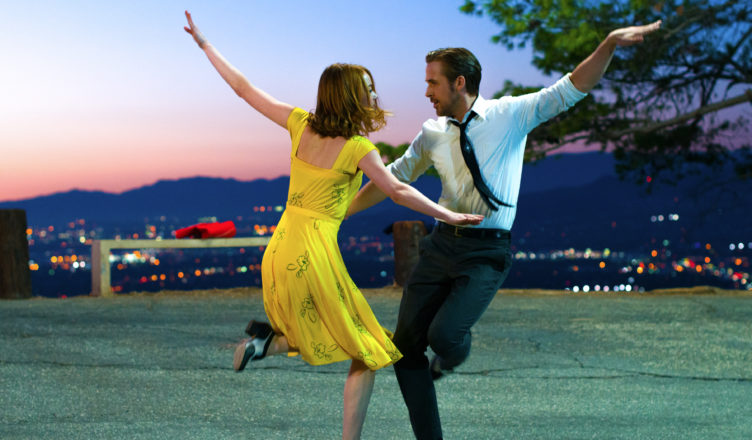 “La La Land”—that place where “they worship everything and they value nothing” (i.e., Hollywood and Los Angeles)—is the subject of Writer/Director Damien Chazell’s third film, following on the heels of his highly acclaimed “Whiplash” with Miles Teller. (Bad teacher J.K. Simmons even has a bit part in this one as Gosling’s boss in a supper club).

Miles Teller was originally supposed to play the lead in “La La Land,” Chazell’s attempt to make a musical like those from “the old days.” This is where I’m supposed to sing the merits of musicals of old (“Singin’ in the Rain,” “The Big Broadcast of 1940”) or mention the stylistic and tonal debt the film owes to Jacques Demy’s “Umbrellas of Cherbourg” and “The Young Girls of Rochefort,” but I was never a huge musical fan and this is a modern film in so many other ways. [My mother-in-law, were she still alive, would love this film! She always admired “Chicago” (the musical).]

But me? I’m more of a thriller type. I had to be won over.

If you’re going to select an actor to win me over, by all means pick Ryan Gosling. I’d have accepted the equally talented Miles Teller in the part, (and I’m still hoping that Gosling will star in a remake of “Logan’s Run,”) but if it’s musicals we’re here to discuss, let’s have at it. Who can forget the onscreen chemistry Gosling already displayed with Emma Stone in “Crazy, Stupid Love” when he told her his signature move was the lift from “Dirty Dancing” and they replicated it?

I liked this one. I would like any musical where the camera lingers lovingly on Ryan Gosling; the fact that he sings passably well and can even do a bit of soft shoe added to my enjoyment. This is to be expected, given his stint on “The All New Mickey Mouse Club” and his early training in Ottawa at the Elite Dance Studio and the top Hat Dance School in his hometown of Cornwall. You have a male lead who can legitimately sing and dance. Emma Stone does an equally good job in both areas, but, somehow, you are less surprised when the female of the species can sing and dance.

Take into account that Gosling’s character of Sebastian is supposed to be a passionate jazz pianist (great lighting in the scenes where he’s playing the piano and throughout the film) and appears to actually be playing the piano, and I’m in. (And I haven’t been “in” to a musical since Leonard Bernstein and “West Side Story.”)

No review of this film would be complete without giving much credit to composer/arranger Justin Hurwitz, who also did the arrangements/music for “Whiplash,” with assists lyrically from Benj Pasek and Justin Paul for the great songs. There’s also one song contributed by John Legend, who has a small speaking part.

When Gosling says, “I’m a Phoenix rising from the ashes” and “I’m gonna’ let life hit me and then I’m gonna’ hit back. It’s a classic rope-a-dope,” you believe him. He’s so devoted to jazz that, says co-star John Legend (yes, the singer), “How are you gonna’ save jazz if nobody is listening. You’re holdin’ onto the past, but jazz is about the future.”

Another conflict-laden scene where the young couple are being pulled apart by (initially) Gosling’s success featured dialogue that was largely improvised and included the line, “Maybe you just liked me better when I was on my ass because it made you feel better about yourself.” (Ouch!)

Second theme is the age-old conflict between art and commerce, i.e., the need to make a buck versus the need to create art.

And, last, but certainly not least, I found echoes of two recent films’ themes struck me. Those 2 previous films were Joseph Gordon-Levitt’s 2009 film “500 Days of Summer” and Woody Allen’s even more recent film (2016) “Café Society” with Jesse Eisenberg, Kristen Stewart and Steve Carell.

Each of those non-musical predecessors suggests that there are a variety of people who might be “right” for you at one time or another in your life, and a variety of futures you might have with each person. And, at least in Woody’s film, you can see the wheels turning in Jesse Eisenberg’s head when his first love re-enters his life briefly at the end of the drama. (“Ah, what might have been!” he seems to be thinking.)

The music of Justin Hurwitz, with lyrical assists from Benj Pasek and Justin Paul, helps carry the theme of reaching for the stars and not giving up on your dreams. (Hurwitz also did the music and arrangements for “Whiplash”). With lyrics like, “Here’s to the fools who dream, crazy as they may seem. Here’s to the mess we make” the plot is carried along a brightly colored path where a young would-be actress and a young would-be jazz musician who wants to own his own club meet and fall in love, rather slowly by today’s standards. (In the age of Tinder, it was nice to see the slow build-up to the romance.)

But it’s a good, witty musical that will garner awards at Oscar time, including a possible Oscar nomination for Emma Stone and the picture itself. If Emma gets a nod for the Best Actress Oscar and Ryan Gosling does not receive a similar endorsement for his skills, it will be a bit like Dustin Hoffman carrying the day in “Rainman” while Tom Cruise was ignored.

I also smiled at the scene when Mia (Emma Stone), who has thoughtlessly double-booked herself with her current steady date Greg (Finn Wittrock) and is standing Ryan Gosling up for their spontaneously arranged movie date, gets up from the table and excuses herself, leaving Greg to join Sebastian. The actor playing Greg (Finn Wittrock) played the psychotic killer clown on the circus episodes of “American Horror Story” and was also featured in the hotel year episodes (with Lady Gaga). I think anyone in the theater who has seen old Finn in his psychotic clown make-up was seriously rooting for Emma to flee, not so much because we felt bad about her standing Ryan Gosling up, but because we half-expected Greg to attack her with a steak knife at the dinner table at any moment. I also recognized another suitor at the very end of the film (Tom Everett Scott) from the 1996 Tom Hanks film “That Thing You Do” and wondered what he’s been up to since then.

Both of the leads, as well as the Writer/Director and everyone who did such a fine job on this film deserve recognition of how difficult it must have been to pull off a romantic musical in today’s crass times. Between all the talk of Donald Trump’s assaults on women  and the specter of Bill Clinton’s trysts elevated to front row status at the second presidential debate, it’s really hard to remember back to more romantic times but to feel that romance in today’s world might be dead or dying. To quote a line from the film that Damien Chazelle might say, “Not on my watch!”

Those who loved musicals do remember romance in films like this, and this is the kind of film they’ll love, which really should be seen on a Big Screen.

So, “Here’s to the ones who dream, foolish as they may seem.”