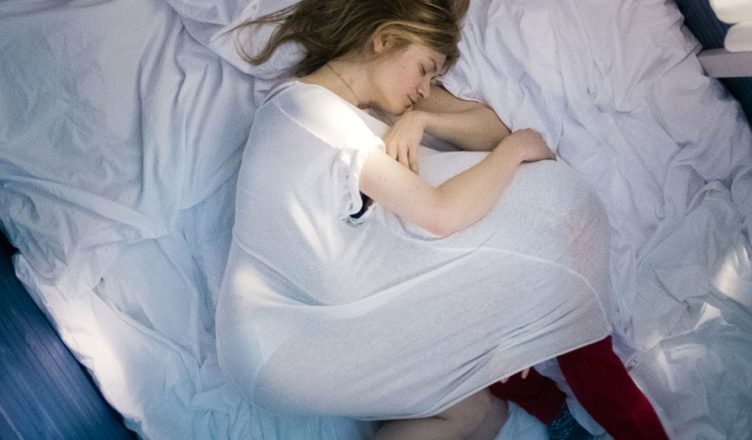 The German film “24 Weeks” from Director Anne Zohra Berrached was screened in Chicago at the Chicago International Film Festival for 8 members of the press on Wednesday, October 5th. It is the story of a popular stand-up comedienne (think a German version of Amy Schumer) who finds herself pregnant by her live-in long-time love and manager, only to discover, several months into her pregnancy, that her unborn child will have both Down’s syndrome and a serious heart defect.

Movingly portrayed by German actress Julia Jentsch, this is not a “feel good” movie. Comedienne Astrid Lorenz (Julia Jentsch) shows every sign of being a woman on the fast track to comedy success. Onstage, she even jokes, “You can tell a decent joke and lactate,” to an adoring audience.

That is all before the couple discovers the health problems their second child will face.

Astrid’s manager and live-in love of 8 years, Markus Hager (Bjorne Madel) is very pro-life and wants to do everything to make this second child happen. (“It feels wrong somehow to decide whether a human being lives or dies.”) Astrid (Julia Jentsch) is initially in synch with her spouse’s wishes. But, as time goes on, she becomes more convinced that, as she explains to their young daughter, Nele (Emilia Piescke), “I don’t think he (the unborn fetus) will have a nice life.”

I had my first child, a son, at 22. Twenty years later, I found myself pregnant at 42 and there were questions. At the same time, my younger sister-in-law was pregnant with her fourth child. Each of us had extensive testing (in my case, chorionic villus sampling, then a new technique). I lucked out.

My daughter (Stacey) was perfectly healthy. She would be born via C-section with no cloud hanging over the delivery or her future. (She went on to graduate from Belmont College in Nashville in Music Business, to work for Taylor Swift’s 13 Management organization, to live in Australia for a year and, now, to fly for Southwest Airlines.)

My sister-in-law did not receive such reassuring news. Her baby not only was not healthy, the baby boy had a condition so rare that my own OB/GYN doctor had to look it up to find out exactly what it was. It wasn’t the relatively commonplace Trisomy 21 defect that causes Down’s Syndrome. It was far more serious than that.

Babies with this defect generally did not live more than a few hours, days, or weeks. They never were able to sit up or learn or become contributing members of society. To make matters worse, my sister-in-law would have to have any delivery via C-section (just like me). Carrying her child to term meant not only knowing that her baby probably would not live long after birth, but that she was going to have to undergo a surgical procedure, regardless of the outcome.

They had their fourth child (and third son), named him Mitchell, and buried him less than six weeks after birth.

I was the only woman in the theater today watching “24 Weeks.” I sensed outrage amongst the male critics present, when the hospital authorities told the frustrated father of the child, “In Germany, ultimately it’s your wife’s decision. That’s the law.” Markus (the prospective father) rails against any talk of a late-term abortion, which would be achieved by injecting potassium chloride into the fetus’ heart, after which the mother would go into labor and give birth to a dead child. Markus tells Astrid, “You can’t do it. Nothing else matters.”

This is a film about life-altering decisions and the people who have to make them. It is extremely well acted and well witten. I was immediately sent back in time to the days of the personal story related above. The topic is still an ongoing debate in this country and will continue to be after the upcoming election. Abortion and capital punishment are always “hot button” issues.

And, no, I won’t tell you what decision Astrid made.

That really would be a “spoiler.”