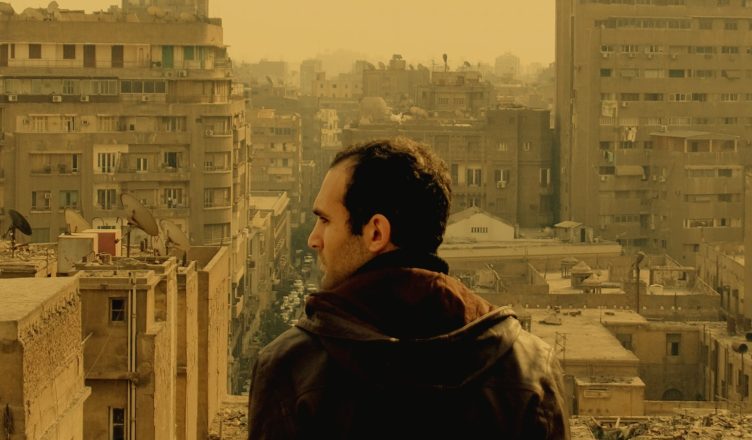 This requiem for a lost Cairo follows Khalid, a filmmaker, in December, 2009, as he attempts to complete a film that is pieced together from footage of his hospitalized mother, his neighborhood, his girlfriend Laila and 2 friends, and street events, all caught on the eve of an approaching revolution. For Khalid and his compatriots, life will never be the same, nor will Cairo.

I was eager to see this glimpse of Cairo, Egypt, before the Arab Spring toppled Mubarek. I felt this was as close to the Middle East as I would ever get. All the countries mentioned—Egypt, Turkey, Yemen, Jordan, Syria, Iran, Iraq, Saudi Arabia—-are dangerous for westerners now. Although some of my teaching colleagues made trips to see Egypt’s pyramids and ride camels there in the seventies and eighties, I fear those days are gone forever. And the cinematography looked (and was) great.
Therefore, I was anxious to see this film about a filmmaker trying to capture the city of Cairo before it changed forever and also trying to make sense of the changes going on around him. When he rides up in an elevator to look at a new flat, each floor has a bumper sticker plastered on the wall that reads “Thou shalt not look at women.” We see a worker in a department store taking western-style clothing off female mannequins, putting newspaper in the windows to obscure the view of the mannequins, and when the newspaper is taken down, all the mannequins are dressed in extremely concealing burkhas. Another sign on a building reads “The Quaran must rule” and “Praying is light.” A street preacher stresses that all must “obey God’s commandments. It’s God’s command. We can’t question it.” When Khalid and his real estate agent show up at one building for a pre-arranged viewing of a possible rental apartment, the veiled woman inside cannot allow him entry because no man is present. Khalid begins witnessing actual beatings (one of a woman by a man near his apartment building; one of a protester who is taken away in the bed of a truck by armed men); he seems shocked. I couldn’t help but think of the Jewish population of cities in Germany as the Third Reich began its oppression.

Throughout, we hear radio reports that fix the time for us: Mubarak denies that there was a vote-buying fund, says all tax money collected is for the people. Cairo is named one of the 5 safest cities. The Egyptian national soccer team is bound for a match against Angola. (Interesting that a record number of fans want visas to travel there.)

It is nearly impossible to keep the characters straight and/or figure out what is going on. And it is going on very slowly. Explanations, when they come, are never situated in the story near the appearance of the character. An example would be a minor subplot involving a woman named Maryam who keeps talking about her dead father and planting a cactus at his grave. We don’t know how she is related to Khalid (the narrator of this story), nor do we know how her father died until very late in the film. Never do we find out why she has never visited her father’s grave, which she tells Khalid during their first conversation.

There are just way too many different characters and situations shoe-horned into this overlong, slow-moving docu-drama. One friend has already fled Baghdad for Berlin and urges Khalid to join him, saying, “Leave the downtown. It will kill you.” The friend adds, “He knows his city is full of death, corpses, and funeral banners, but he’s still there.” This friend says, “I want to live now and in the future. You insist on living in the past. We all love Cairo; it’s a Siren. It has betrayed you.”

A second friend is also resistant to leaving the city, insisting that the omnipresent danger deepens one’s enjoyment of life. (“Life deepens. You’ll find real meaning…You stop seeing because the images become like noise.”) But one day, that friend, too, finally leaves, saying, “All we do is hide.” Khalid told the first expatriate friend, “You’ll die missing Baghdad” to which his friend replied, “It’s better than dying in Baghdad. In Baghdad, you don’t choose. A stray bullet, you die.”

Khalid acknowledges that he is trapped in a state of stasis, saying, “There’s just too much.” His western-style girlfriend is reluctant to take his calls. His mother may be dying (it took at least half the film before it was explained that the elderly woman in the hospital was his mother and we never do find out if she is seriously ill or simply old). He can’t find a new apartment and must vacate his old one by February. Rabble rousers in the streets are holding rallies and crying “Down with the tyrant. Down with military rule,” while a taxi driver says, disgustedly “They should get a job instead of protesting. The country is fine.”

Don’t bother. I really wanted to like this film, which had won three awards. Buy a book with pictures of Cairo, before and after 2009 and read up on the rebellion. That was over 2 hours of my life I’ll never get back. Khalid’s film editor said it best: “We just go around in circles. I feel I’m wasting my time.”