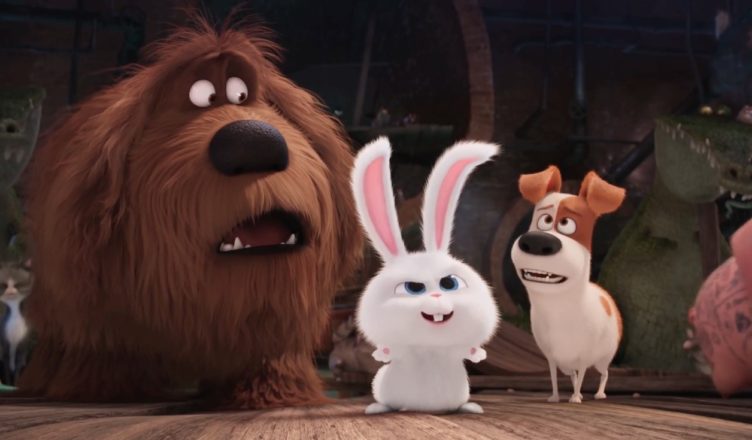 Synopsis: A terrier named Max regularly invites his friends to hang out at his place while his owner is gone, but his quiet life is upended when said owner also takes in Duke, a stray mutt whom Max instantly dislikes. (Imdb)

Any pet owner must have wondered at some point what do their pets do when they aren’t home. “The Secret Life of Pets” takes a fun look at the lives of pets when their owners are away. You can bet there are a lot of shenanigans going on, mostly unrealistic, but still entertaining and wacky.

Max is the main hero of the story. Max is an upbeat terrier living in a Manhattan high rise with his dog loving owner Katie. His perfect dog world is turned upside down when Katie brings home Duke, her new adopted dog. Max and Duke can’t seem to get along right from the start. During a trip to the dog park they find themselves in trouble and must work together to survive the journey across NYC.

I was really excited about this film for a while. The pets are fun and colorful characters. They made some great choices on them. Max the terrier is the ideal lead of the film. His sort of the voice of reason. All the other pets are strong sidekicks. Chloe is a fat cat that’s fairly sarcastic. Gidget is the white fluffy princess dog that’s in love with Max. She’s naive and oblivious, but persistent as heck. The best character in the movie is Snowball. The blue eyed white cottontail bunny voiced by Kevin Hart. What’s great about Snowball is that he’s the unlikeliest animated animal villain I’ve ever seen. He looks absolutely adorable, yet he’s vicious and evil. In 99% of movies this character would be the nice and cutesy one, but I loved how they made a little adorable rabbit such a mincing villain. Don’t let those cute small two frontal teeth fool you, he’ll bite ya’.

The best part of the film is the portrayal of the animals and their perspective on how humans treat them. Almost every act you’ve done or ways you’ve talked to a pet is depicted. For example like when the dog is thinking he’s going out for a walk with it’s owner only to have the owner sneak out and close the door on them, then come back minutes later to get the cell phone and the dog things you’re back to take them out. This are all actions all dog owners have committed at some point. The neat thing is that in the movie you get that reaction commentary from the animal in regards to human behavior. It’s a nice touch of animal perspective. Some of it probably factual, some of it obviously not.

As charming, funny and entertaining the movie was, there was just something missing. It didn’t quite feel right. The biggest issue might have been the plot. While it made sense in the end and it didn’t veer away from it’s mission statement and commentary, it seemed a bit over-the-top and sloppy at times. Max and Duke are constantly on the run–literally. Once the trouble for them starts, there is no moments to take a breather. The “underworld” that’s run by Snowball doesn’t have a meaningful objective. Yes, they hate humans for their treatment of them, but what’s their purpose or point they are trying to prove? How are they going about getting back at humans? Just doesn’t seem very clear.

One way the overall message of the movie could have been elaborated on is to include some more heartfelt moments and include some more human and animal interaction. The humans in the movie just serve the purpose to introduce the animals, which is understandable since the focus is about the “secret lives” of these pets, but you need the humans more since they are the biggest motive for this animals.

Not quite the movie I was hoping for it to be, but still fun and enjoyable. The animal characters are diverse and plentiful. There are a lot of funny moments that most will enjoy. The central message of the movie does come through. The message about the treatment of animals, and how humans sort of neglect them, even though it might be unintentional. The love of animals for human beings and each other also carries through. “The Secret Life of Pets” lays out the one thing that shouldn’t be a secret–all that animals desire is to be loved and have a home.