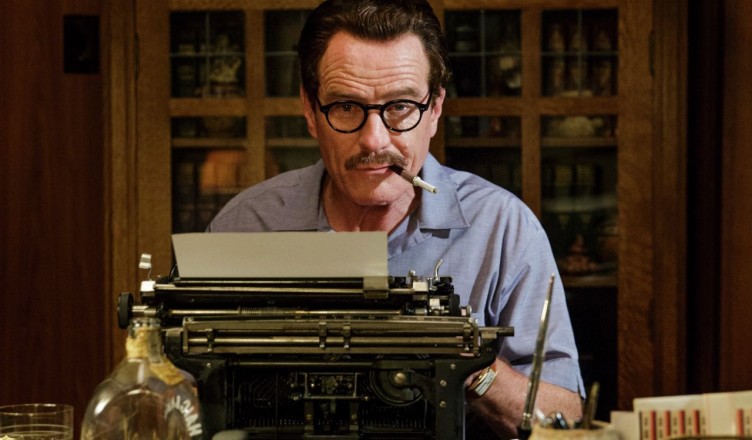 Synopsis: In 1947, Dalton Trumbo was Hollywood’s top screenwriter until he and other artists were jailed and blacklisted for their political beliefs. (Imdb)

Communism in Hollywood? It happened. In “Trumbo,” (Blu-ray/DVD on February 16) director Jay Roach (Meet the Parents, Austin Powers) brings forth the story of Dalton Trumbo, the most prolific Hollywood screenwriter in was blacklisted and jailed for his political beliefs. Written by John McNamara, and based on a book by Bruce Cook, this is as much a political movie as it is a look at the personality that was Dalton Trumbo. The film depicts the ugly side of Hollywood politics in the late 1940’s, while presenting it in visually elegant way, yet ultimately Cranston steals the show.

Trumbo is an all-time great when it comes to screenwriters, yet it took years to for him to get the recognition he deserved. That’s pretty much that’s what the plot of the movie works towards. The highs and lows of Trumbo’s journey in Hollywood’s lore, and the battle for voicing his beliefs.

This is a film that’s stylistically appealing. The cinematography is cleverly constructed by Jim Denault. The vintage look of the film is enhanced when the characters are watching television and what appears on the TV is actually not stock footage, but rather scenes filmed for the movie. An example of this is when the Trumbo family watches the Oscars and I couldn’t help but wonder if that was actual Oscar footage or it was part of the movie? Production Designer Mark Ricker and Costume Designer Daniel Orlandi do terrific work showcasing Hollywood’s Golden Age with style and elegance.

As visually pretty as the movie is, Cranston is still the centerpiece that the movie revolves around. He’s not just great as Trumbo, he is Trumbo. The transformation is incredible. His body movement, facial expressions, and look is spot on. His drawn out speech pattern, where he talks slowly but emphatically, is how you imagine the real life Trumbo spoke. He has the cigarette hanging out of the edge of his mouth at most times, and the thick black framed glasses, just the mere look gives you an idea what Trumbo was like. It’s a Best Actor type of performance no doubt. It’s crazy to think that an actor of the caliber of Cranston is finally getting his due and shot at being leading man, after years on television. For goodness sake he was the dad from Malcolm in the Middle!

The supporting cast is really strong. Diane Lane plays Trumbo’s wife, she’s the vital character in the movie who holds down the family during all the chaos. John Goodman has found a niche in Hollywood in recent years as playing the entertaining sidekick. He’s funny and entertaining as low-budget film producer Frank King, and adds some clever side gags. Lois C.K. stars as Arlen, Trumbo’s confidant and friend whose a bit of a loose cannon. C.K. shows some impressive range. Helen Mirren is Hedda Hopper, a journalist who teams up with the negatively portrayed John Wayne to start a smear campaign against Trumbo. What can you say about Mirren that hasn’t been said already, she always gives a fine performance.

This is a film with great all-around filmmaking and acting. A collaboration that’s helmed by the great performance by Cranston. “Trumbo” has two layers to it. One on the commentary about perception and beliefs that not only resonated in Hollywood but in the country in the 40’s and 50’s, the other on the fascinating life of ups and downs that Trumbo had. Trumbo is humorous, educational, and fascinating. The man that penned “The Brave One,” “Roman Holiday,” “Exodus,” and “Spartacus” to name a few finally gets his deserved due on the big screen. A writer that stood for his beliefs and endured hardships due to the Hollywood Blacklisting and managed to hold his ground. Roach and Cranston team up to give Trumbo the ultimate compliment by telling his story.