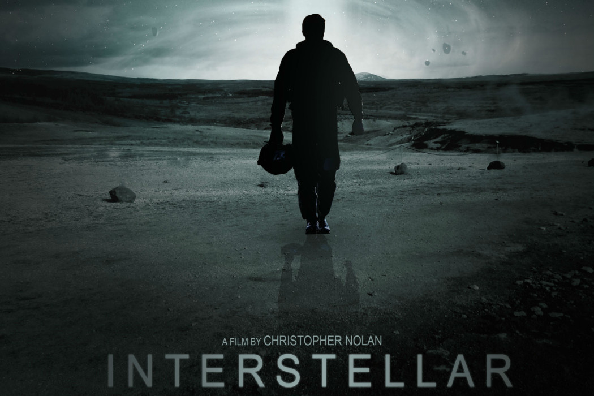 With our time on Earth coming to an end, a team of explorers undertakes the most important mission in human history; traveling beyond this galaxy to discover whether mankind has a future among the stars. (C) Paramount

Interstellar was a challenging science fiction/adventure movie to process and think about well after it ended. Massive in scope and vision, Interstellar requires repeat viewings and audience debate for some time. The divisive reaction from critics, on par with recent classics as The Wolf of Wall Street and The Master,  affirms its greatness. The visually overwhelming and emotionally exhausting Interstellar could divide audiences like critics. As a filmmaker, Christopher Nolan is the master grand wizard of Hollywood connecting mainstream audiences with distinct style and lingering thoughtfulness on a blockbuster level. I would be more impressed with this great auteur if he would follow this up with a smaller movie. The plot seemed pretty complicated making the semi-convoluted Inception look like a Pixar movie by comparison. I don’t want to reveal it nor explain it.

Not all the technical aspects were as great as others in Interstellar. What worked and didn’t work? First, the Cinematography was stunning, like Gravity great. The only comparison to that movie is it takes place in space. Nothing more. There’s more theory in Interstellar. A lot more dialogue, too. Of course, the special effects were breathtaking. A lot happened on screen. Visually impressive, Interstellar is both delicately quiet while rambunctiously loud. Hans Zimmer’s Musical Score was a letdown from his other great work in previous movies. Resembling screeching organ music, the composition left more to be desired especially to my ears. The experience is awe inspiring, visually jaw dropping and unfortunately headache inducing. I desired to read an Arthur C. Clarke type science fiction novel in order to grasp the ideas and re-read the complexity of the science. Expect this movie to rack up a decent amount of Oscar nominations and even a few wins!

Matthew McConaughey has some key emotional moments that rival any performances he has ever done. The scenes of him watching his children group up was heart breaking. Likewise, the always great Jessica Chastain succeed in engaging with the audience. Her supporting performance was vital in Interstellar. You care about her and that she will find her father. I wish she was in the movie more. Anne Hathaway seems to shine when she is in a Christopher Nolan movie. Mr. Nolan allows her to keep her haters in check allowing her talent to be revealed. The cast works well together excelling beyond standard science fiction acting. They deliver an emotional powerhouse of realism.

I easily recommend Interstellar as a big screen, movie going experience. It is a mess of a movie, but it is so ambitious that it must be seen to believe. From fellow staff writers at The Movie Blog to our readers especially die-hard Nolan fans, I am curious to hear everyone’s reaction to it. Celebrate film by supporting this movie on 35MM and 70 MM presentation.

2 thoughts on “Interstellar: A Masterful Cinematic Experience to see on 70MM Film!”