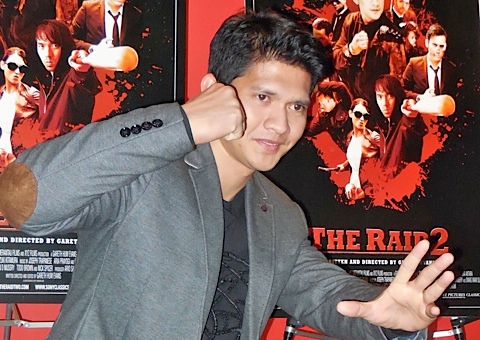 Welsh director Gareth Evans returns to Indonesia for “The Raid 2,” another intensely, hyper-violent martial arts film that ups the ante of its predecessor, “The Raid: Redemption.” The bone-crunching fight scenes are exhilarating and exciting not only for fans of the genre but also for anyone who appreciates fast-paced and well-edited action scenes.

At the center of the action is the impressive Iko Uwais, who is also the fight choreographer of both films, and is to martial arts what Gene Kelly is to dance. The battles are intense. Evans gets downright giddy with the carnage that gets the adrenaline pumping and leaves you drained. In “Redemption” – a film in which there was none – the righteous Rama, played by Uwais, fought his way up the stairway of a building through an army of gangsters and madmen to get to the kingpin at the top. Rama fought in claustrophobic close quarters against thugs equipped with guns, grenades, machetes and knives while he had only his flying fists and feet.

The sole survivor of the first movie, Rama gets dragged back into the criminal underworld of corrupt cops and politicians, forced to go undercover to protect his son and wife. This time around the psychopaths are even crazier. One of the most colorful is Hammer Girl (Julie Estelle), a female badass who gets her name from her weapon of choice. The beautiful actress wore an elegant black dress by an Indonesian designer, and when I looked behind her and jokingly said I was glad she wasn’t carrying any hammers, she laughed, “You’re safe, don’t worry.”

Estelle told me she had no martial arts training before she made the film. “He (Evans) thought I was this pretty girl who couldn’t fight and here I am smashing people with hammers.” She trained for six months to prepare for the fight scenes.  “That’s why this was such an interesting role for me to take and it was very challenging physically and I loved it,” she said.

Uwais, who is a master of martial arts known as pencak silat, practiced relentlessly with Estelle for their smack-down. “We trust each other, me and Estelle. When we hit it’s not a real hit,” he said. (The hammers, Evans told me later at the after party, were made of rubber.) Fighting a woman though had its obvious challenges. “Man and man, it’s full speed, full power. When I punch Hammer Girl it’s more controlled. It’s different.”

So after they beat each other and the director called cut, did they go out and get coffee? Estelle laughed. “No. We said let’s do it again and again until we get it right.” (Next up for the actress is “The Night Comes for Us,” another action thriller, executive produced by Gareth Evans and directed by Timo Tjahjanto.)

On the red carpet Estelle translated for Uwais, who speaks little English. I asked him how he staged his fight scenes, which featured a prison riot in the mud between hundreds of policemen and criminals, and another fight, protracted and bloody, between him and a psychopath in a stainless steel kitchen equipped with knives and meat hooks. “He (Evans) used a storyboard and a video board so during the shoot he can review the fight scenes and then he knows which shots he should do next.” The choreography is so precise there were few injuries. “No more than usual in action movies but no major things.” “This movie is definitely more complex choreography wise,”  than the first one, “especially this one fight scene, a prison riot. They have to fight in the mud. It’s difficult for us to breath. You can’t walk like usual. It’s really sticky and slippery and we worked with 120 people and it’s difficult,” Uwais explained.

The most difficult scene to set up and shoot was the kitchen battle, which, the director said, involved 192 shots and in which the camera never cuts away from the action to another part of the story. As the director envisioned and directed it,  “It’s going to be one flow, where we’re going to go through the entire fight scene. It’s like 12 minutes, with one line dialogue and it’s just all intense action.”

This kitchen smack-down is also the director’s favorite fight sequence. “That was the most intricate, complex choreography. The guy that played the assassin (Cecep Arif Rahman) is renowned in the pencak silat community. He travels across the country to teach, nationally and internationally, and participates in tournaments.” Evans added, “I knew I could get really complex, intricate choreography from him and then just make it slowly deconstruct and dismantle it until this brutal, savage ending, and it was just that idea of non-stop, not holding back, not cutting away to anything, just being in that moment.”

Evans wrote the script for “The Raid 2” before he began on the first movie but put it away when he realized it would be too expensive to make. With the success of “The Raid: Redemption,” which earned $4.1 million at the box office and cost $1.5 million to make, he was able to widen the net and increase the budget. He took out the old screenplay.  “All of the characters, including Hammer Girl, existed in that first version and it was just a matter of bringing in the police procedural elements to beef it up a little bit,” Evans said.

The budget for “The Raid 2” was nearly four times the first movie.  “It’s still small in comparison to the stuff you make over here,” the director said. “We spent about 4.56 million on this and most of that went on buying cars and closing roads so that we could smash those cars up,” he laughed. Evans, whose films are inspired by martial arts masters and movies by John Woo and Sam Peckinpah, didn’t want to make a retread. “We always have to go ten steps bigger than the last one. We’ve always got to make it better and better and better and not repeat ourselves and so my whole goal was not to do a sequel to a film where you felt it was a rehash of the original idea, because that’s the worse kind of thing, when it’s just a carbon copy of the original film but with just slightly different punch lines, that kind of sucks. I wanted to do something that was completely different, that expanded the universe, that told a totally different story, but had the same themes and had the same universe and existed in the same world.”

There will be a third Raid film and although he hasn’t started writing it yet, he’s planned the timeline. “Just as the second film takes place two hours after the first one ends, the third one will start three hours before the second one ends, so we jump back in time.” But that is three or four years down the road; his immediate plans are to produce and make films outside of Indonesia.

An affable and large man, who abhors real-life violence, I asked the director how he responds to critics who complain about the violence in his films. “Anyone who’s seen the first one knows what they’re getting into,” Evans laughed.”

Before the screening began, the director jokingly told the audience, “Thanks for coming out to watch my PG-13 romantic comedy.” He introduced his leading actors, Julie Estelle and Iko Uwais. “They look nice. They look polite, but they’re f….ing violent! And remember, it’s just a movie and nobody died, well two or three people possibly,” Evans laughed.